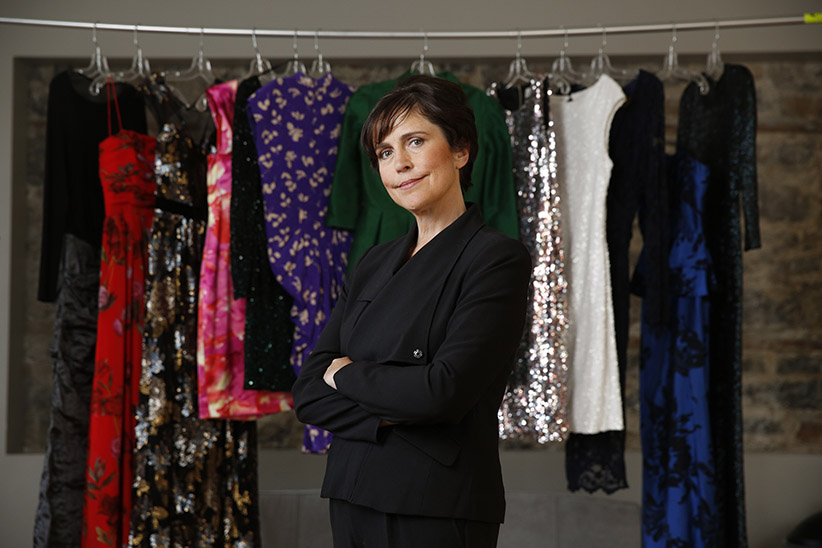 Back in 2001, at an angel-investing conference in Toronto—a gathering of wealthy individuals who provide early-stage funding to start-up businesses, hence the divine moniker—Coralie Lalonde was an unusual sight. As the precocious mid-thirties founder and CEO of angel-investment group Katsura Investments, she was among peers. But as the event went on, she looked around the room and began to count. “I went, ‘Wait a second, am I the only girl here?’ ” she says.

Indeed, amid the sea of suits, Lalonde spotted fewer than 10 women, and after learning they were representatives from investment firms or government, she realized she was the only female angel among the 134 attendees at the event. Not that she ever felt out of place there, or at any subsequent angel-investor events where the entrepreneur and former contractor for Nortel would hear pitches from companies looking for backers. “It’s not intimidating because I don’t need to be there,” she says. “I’m invited because somebody wants something from me. You may or may not be considered an equal, but it doesn’t really matter. Don’t treat me as an equal? Fine—you don’t get my money.” [tweet this]

Today Lalonde, now 49, is a pioneer among the rising number of women in Canada jumping into the risky, male-dominated world of angel investing—and finding they thrive in it. Although the National Angel Capital Organization (NACO) doesn’t track the gender of Canadian investors, those in the angel-investor community say they’ve seen the landscape shift as more women gain wealth and long, accomplished careers in business.

“There are more women angel investors now than there were 10 years ago,” says Ottawa’s Caroline Somers, who has invested in roughly two dozen companies, many through angel group Band of Scoundrels, of which she is a managing partner (angels often form groups to invest together or pool advice). Together with Jennifer Francis, Somers is also co-chair of the Capital Angel Network, which is about 15 per cent female.

While women still make up a relatively small part of the angel-investor community, many are influential. Just 10 years after that Toronto summit, NACO named 45-year-old Calgary green tech entrepreneur Michelle Scarborough its first female chair. The Network of Angel Organizations’ Ontario branch got its first female chair, Patricia Lorenz, in 2008; she only recently stepped down.

This past June, Scarborough founded an angel group specifically for women—the first one in Canada, to her knowledge. With members from Calgary, Vancouver and Edmonton, she hopes the informal, as-yet-unnamed group will eventually blossom into a national organization, inspired in part by U.S. group Golden Seeds, which connects female and male investors with female entrepreneurs.

A relatively new investor class in itself, angels provide critical capital to early-stage companies, getting equity or convertible debt in return. In the past decade, the barriers that stood in the way of women becoming successful angels have begun to fall away. For one thing, there are simply more independently wealthy women than in the past. Under securities laws, in order to invest in private companies, angels must possess at minimum financial assets in excess of $1 million (not including pensions or the value of personal residences). Far more important than being rich, though, is having a seasoned career at high levels of business to draw on when judging the merits of new start-ups and inexperienced CEOs. Women who elbowed their way into the testosterone-filled corporate milieu of the 1980s and 1990s are reaching retirement, many of them relatively young and with executive experience. Those women are now injecting anywhere from $25,000 to $750,000 into myriad industries, from green energy to computer technology to genetic research, in the hopes of getting in on the ground floor of the next big thing. “As women get more experienced in business and understanding what the risks are, their appetite for risk is increasing,” says Somers. 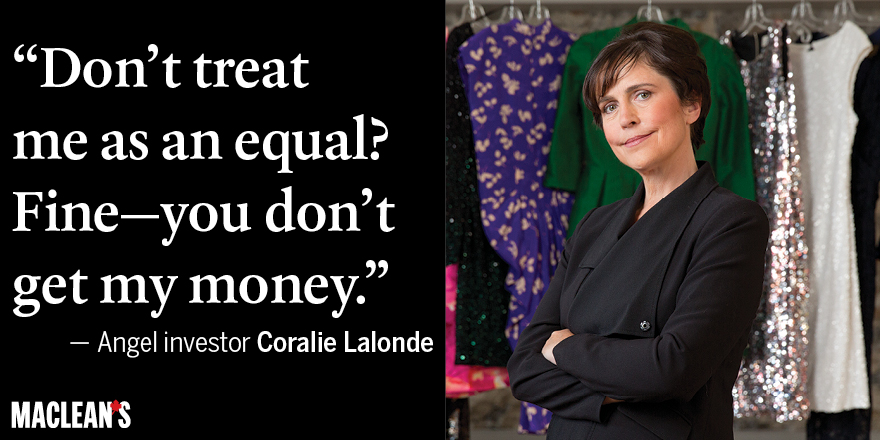 Certain companies are discovering that having a female angel on their side isn’t just nice for diversity—it’s necessary for survival. When female entrepreneurs create a product or service tailored to other women, getting funding from men can be a tall order. That was Lisa Delorme’s problem. In 2011, she co-founded Toronto firm Rent Frock Repeat—like Airbnb, but for fashion. It rents out designer dresses at a fraction of the price of selling them, aiming to save women time, money and anxiety.

With pop-up shops and a website, Rent Frock Repeat quickly drew more business than it could handle and needed to hire staff. But after three years of unsuccessfully pitching to multiple angel groups and as many as two dozen individuals—the vast majority male—Delorme realized she had a communication problem. “They’d say, ‘Yeah, I don’t get why my wife needs a new dress for every event,’ ” she sighs.

She finally found financing by pure chance. One day, Coralie Lalonde walked into Delorme’s Ottawa pop-up shop. A self-described “shopping-hater,” Lalonde needed a dress for a fundraising event; Delorme picked out a whole new wardrobe for her. When Lalonde heard that the company needed funding, she offered to help and began making introductions. Last fall Rent Frock Repeat announced its first round of funding, $1.15-million, led by Lalonde, through Katsura, and by Somers. Of the firm’s 17 investors, nine are women. Three of the women had never made an investment before, like Lauri Cabral, a masters student with a background as a negotiator and in human resources. “It’s a little scary and exciting,” said Cabral. The fact other women were investing made it less intimidating, she says.

Some angels are finding that traits typically thought of as female—communication, cultivating relationships, supporting others—come in handy when trying to sell other potential investors on a company, or when coaching an inexperienced CEO. “There’s a nurturing side to this business,” says angel Shaune Eldred, 60, of Kelowna, B.C., who got into investing after she and her husband retired early from successful careers in finance and technology. “You’re dealing with start-ups,” she says. “You’re dealing with entrepreneurs who need some hand-holding in many cases.”

Some female investors say they feel driven to help capable female entrepreneurs get ahead. One of Lalonde’s first investments was in friend Dale Gantous, who used it to get her streaming media firm, SofTV.com, off the ground in 1999. Others don’t set out to help female business owners, but end up doing so. Of Eldred’s seven investments, four are led by women—although more men than women have pitched her. “As an angel, I have to believe what people are telling me in their presentation,” she says. “I think men tend to be much more aggressive with their predictions. So maybe they’re less believable in many cases.”

Make no mistake, female investors would never bet on a company simply because it was female-run. “It’s going to be big and it’s going make us lots of money,” says Lalonde of Rent Frock Repeat. (She says proudly that her investments have yielded a 300 to 400 per cent return over her angel career.)

After looking for profitability, many women say they are drawn to investing in firms with a social enterprise or environmental component. Lalonde and Somers both cited Rent Frock Repeat’s potential to expand the sharing economy as an attraction. In early December, Scarborough said she was getting ready to bring a biodegradeable plastics ﬁrm to the attention of the “ladies” of her angel group, which aims to make its first group investment this year.

As more women invest, more women-run companies will likely find it easier to get funding, and that, in turn, will help create a new generation of women with money to invest. The audiences at those angel-investing conferences will never look the same again.