The U.S. Treasury Secretary was in Ottawa Friday to meet with Canadian government and business leaders 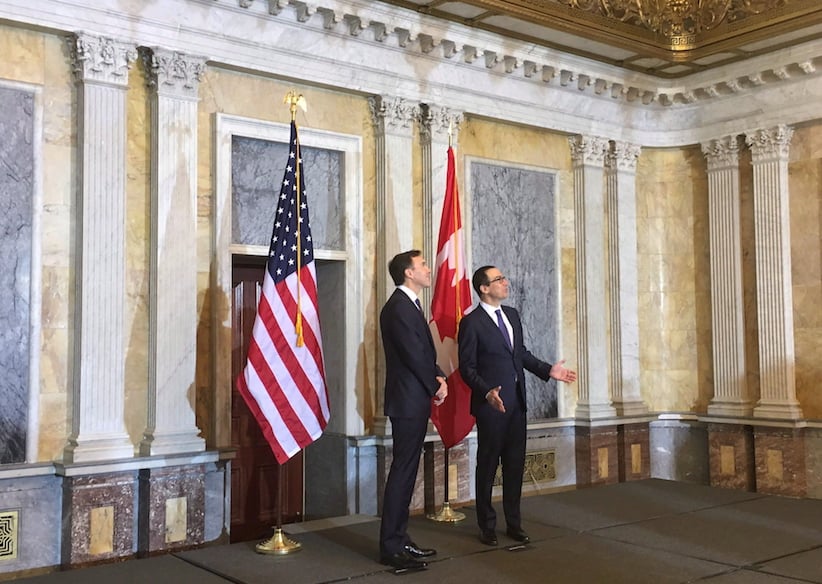 OTTAWA – With far tougher talks on the horizon, President Donald Trump’s treasury secretary offered up some reassuring words Friday in Ottawa on the U.S.-Canada relationship.

In his first official visit to the national capital, U.S. Treasury Secretary Steve Mnuchin met with senior members of the Trudeau cabinet and took part in roundtable meetings with business leaders.

The agenda featured a number of cross-border topics that could have a significant impact on the Canadian economy, including U.S. tax reform and trade issues surrounding sectors from lumber to dairy to energy.

Mnuchin, a former hedge fund manager, has now met with Canadian counterpart Finance Minister Bill Morneau five times since he was sworn in a few months ago. And with NAFTA talks on the horizon, more delicate discussions are surely ahead.

Trump has called the 23-year-old NAFTA the worst trade deal the U.S. has ever negotiated and has pledged to scrap the agreement if it can’t be renegotiated to his satisfaction.

Formal talks have yet to begin and it remains unclear how the deal, which is deeply important to both economies, might be retooled.

MORE: What if Canada and Mexico said no to renegotiating NAFTA?

After Friday’s meetings, Mnuchin sought to ease concerns, but said it was still premature to get into specifics about what Washington’s eventual asks might look like.

“I think whatever we do, our objective is to make sure that this is positive for the U.S. economy and positive for the Canadian economy to continue to allow the commerce that we have between us,” he told a news conference.

“We had many very productive both political and economic discussions. As I said, this is one of our most important relationships.”

Since Trump’s election win, the Bank of Canada and Canadian business leaders have repeatedly expressed concerns about the uncertainty related to potential protectionist measures in the U.S., as well as Trump’s tax-reform proposals.

Some business leaders fear that corporate tax cuts under discussion in the U.S. could hurt Canadian competitiveness.

Morneau said his meetings with Mnuchin shed more light on some of these unknowns.

“What we heard today from Secretary Mnuchin is a resolve to move forward on tax reform in the United States and an agenda for trying to get at that (done) as rapidly as possible,” Morneau said.

“And that’s positive from our standpoint, because that clarity is good.”

Canada’s relationship-building exercise with the new U.S. administration has involved most members of Prime Minister Justin Trudeau’s cabinet. In an effort to build stronger bonds, senior ministers have been making frequent visits to Washington since Trump took office.

They also spoke about the future of cross-border energy trade, Mnuchin noted, but he refused to elaborate on Trump’s sharp complaints in April about Canadian energy.

The president added energy to his list of long-running trade irritants with Canada — dairy and lumber are among them — without offering any additional details.

Mnuchin said he was “comfortable” dairy and lumber would be addressed together because they’re a relatively small part of the trading relationship. Energy, he said, is a big part of cross-border trade and more discussions are still needed.

Mnuchin did offer some details in one area that could surface during NAFTA talks: a possible provision to address currency manipulation.

He said monitoring currency manipulation is critical — and he added he believes Canada shares the U.S. view on the issue.

“I think this is less of an issue between us and more of an issue of the significance that we both feel this is very important to both our economy and the Canadian economy,” said Mnuchin, whose trip to Ottawa was the first by a U.S. treasury secretary in a decade.

Earlier in the day, Mnuchin participated in a roundtable with about 20 business leaders in Ottawa.

John Manley, head of the Business Council of Canada, said Mnuchin acknowledged he was aware the U.S. had a trade surplus with Canada when it came to goods, and said the Trump administration is primarily concerned with trade deficits.

“I think he made everybody feel a little bit easier,” said Manley, whose group hosted the meeting and who called the tone positive, though unlikely to fully ease the concerns of participants.

“He’s among the globalists in the administration, so perhaps not as directly a threat to things like NAFTA as others might be,” he continued.

“But everyone knows that this hasn’t landed yet. It is a fact that the president of the United States described NAFTA as the worst deal ever.”