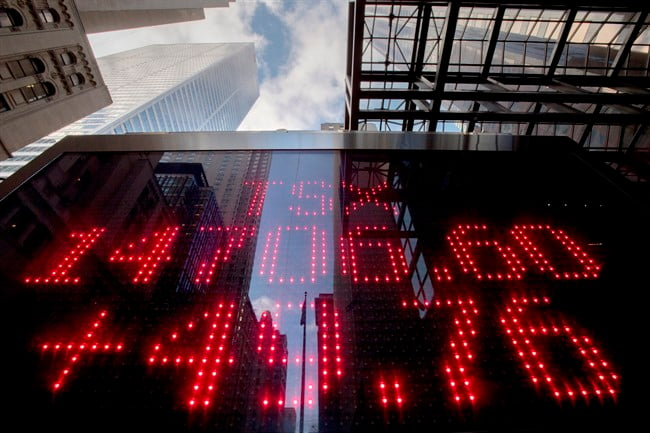 A sign board in the banking district shows the TSX market value and gain on Wednesday November 9, 2016. (Frank Gunn/CP)

TORONTO – Canada’s biggest stock market rose Wednesday, while Wall Street hovered around record levels, as investors warmed to the idea that the victory of U.S. president-elect Donald Trump will be good news to business on both sides of the border.

The optimistic tone helped push the resource-heavy S&P/TSX composite index higher by 103.07 points at 14,759.91, led by a strong rally in the gold, metals and materials sectors.

Crude oil added 29 cents to US$45.27 a barrel, after trading lower for most of the day. December natural gas jumped six cents to US$2.69 per mmBTU.

Gold, which is often considered a safe haven in times of global turbulence, pulled back on some of its earlier gains with the December bullion contract fading $1 to US$1,273.50 an ounce.

Investors also drove up metal prices, as the December copper contract climbed eight cents to US$2.46 a pound.