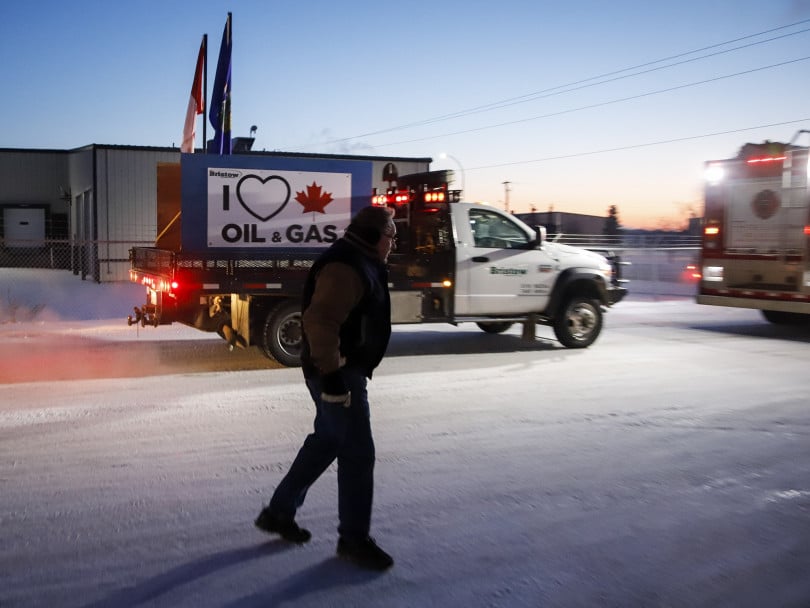 Even as Drew Lake spoke alongside Wexit founder Peter Downing, scanning the crowd before him, he was unsure what he really wanted. Days after the Trudeau Liberals won re-election—and the Conservatives won 84 per cent of the vote in Lake’s riding—he co-organized a public discussion with the separatist activist at the exhibition hall in Lloydminster, the city straddling the Alberta-Saskatchewan border. Lake titled the event “What’s Next for the West?” Armed with swipes at central Canada and the nascent party’s slogan “the West wants out,” Downing had answers to that question. Lake didn’t.

“I’m not a separatist at heart but I’m starting to run out of ideas,” the oil worker told 80 attendees, according to the local newspaper. Lake wore a maroon blazer atop a black T-shirt emblazoned with “I (heart) oil and gas”; the crowd was largely ball caps and jeans. Over five years, the energy sector got relentlessly battered by low commodity prices, pipeline delays and policies seemingly designed to frustrate it. And with no change to the national policymakers, he felt Albertans and Saskatchewanians were backed into a corner, worried about economic survival. “We’re here out of desperation, wouldn’t you agree?” he told the crowd.

A few weeks later, Lake is a bit more clear-eyed. He’s encouraged by demands on the part of Alberta Premier Jason Kenney and Saskatchewan Premier Scott Moe for a fairer deal on equalization and other files. He’s stopped kicking tires on Wexit and its leader’s firebrand rhetoric, which to Lake evokes too much of the worst “angry westerner” stereotype. He hasn’t slammed the door entirely on the idea of breakaway Prairie provinces—especially if conditions don’t improve. But he admits he welcomed Downing to a Lloydminster event largely because he wanted to help Conservatives raise political pressure on Liberal Ottawa. “To give them an extra tool. They can go back to Ottawa and say, ‘We’ve got folks that are ready to leave Canada; this has gotten so bad that we really need to do something about it.’ ”

READ: Why so many Albertans are giving up on their country

There are few better perches than Lloydminster from which to hear the sirens and sighs of oil country. Fiftieth Avenue cleaves the 31,000-person city into coarse halves—one in Alberta, the other in Saskatchewan. But it’s an interprovincial compromise zone where (as in Alberta) stores don’t charge provincial sales tax, clocks turn to daylight time (unlike in Saskatchewan) and young families tend to prefer settling on the city’s east side to save on auto insurance (through Saskatchewan’s public insurer).

Lloydminster is represented by two conservative premiers who sound the drumbeats of pro-energy, anti-Trudeau frustration; whose provinces now have zero Liberal seats, provincially or federally. Their populaces now are more likely than Quebecers to believe that they’d be better off if they separated (33 per cent in Alberta and 27 in Saskatchewan, compared to 26 per cent in Quebec, according to an October poll by Ipsos).

Oil is Lloydminster’s economic lifeblood, and its pulse has sputtered since the 2014 price crash. The city went from full employment during the boom to 11.4 per cent unemployment by the 2015 census. By no accounts have things improved since. On a tour of industrial parks dotted by empty lots, Mayor Gerald Aalbers notes vacancies in several buildings and drives past a field of 150 disused heavy-oil trailers. He’s begun hearing, he says, from oilfield workers who trucked up to northeastern British Columbia for work and are sending their cheques back home to Lloyd—a reversal of decades of outward income flow from the resource towns of Alberta and Saskatchewan.

The real estate market has plunged, as few homeowners are willing to leave and take a loss unless they’re forced to. One quarter of the Lloydminster homes that have sold in the last two years were foreclosures, says agent Jennifer Gilbert. The struggles she’s seen clients go through have been traumatizing. In a resource-dependent city, she was told, things would go in waves. “But this has not been a wave,” she says. “This has been a parting of the waters.”

Lake, a friend of Gilbert’s, invited her to his event to provide a counterpoint, but she didn’t want to be associated at all with the inflammatory Wexit movement. She terms herself a fed-up federalist who doesn’t know the right way forward: “People are angry, frustrated and lost. And they feel like their voice is not being heard.”

Seldom have the anxious wails come in unison like this from Canada’s two landlocked provinces—a descriptor often applied now amid controversy-mired attempts to build pipelines. Political alignment has helped: Kenney’s victory last spring over the Alberta NDP made him and Moe leaders of the Conservative fight against carbon taxes. Over the next year, Canadians can count on these two leaders teaming up to assert their will in increasingly tough terms. Kenney won by projecting strength against a Trudeau-led Ottawa, a durable Prairie whipping post; Moe, whose Saskatchewan Party is the overwhelming favourite in next fall’s provincial election, will campaign from the same posture. Both demand reform to Ottawa’s equalization formula—and after Kenney announced a panel to study replacing the Canada Pension Plan and community RCMP branches with Alberta-only versions, Moe said his province may pursue similar forms of autonomy.

Nearly two decades ago, when Alberta last entertained these so-called “firewall” measures, Saskatchewan was uninterested (and NDP-led). It was also less enthused than Alberta by western separatism in the 1980s, when Pierre Trudeau and his detested National Energy Program gave rise to the short-lived Western Canada Concept party (the Saskatchewan PCs were in charge, back then). Now, Saskatchewan’s economic fortunes are more in sync with its western neighbour’s. Booms in oil and potash liberated Saskatchewan a decade ago from economic “have-not” status. It gained an Alberta-like swagger it never before possessed. Where Alberta once felt left out of decision-making but didn’t mind because it was strong and confident, Saskatchewan felt left out and too poor to do much about it, says Andrew Parkin, executive director of Environics Institute for Survey Research. The oil bust and the loss of a western-based Conservative federal government changed things for the provincial siblings. “They’re now feeling both politically and economically left out. Alienated and aloof,” Parkin says.

Brad Wall, the former Saskatchewan premier, now works as a law firm adviser in Calgary. He’s also a key figure behind the “Buffalo Project,” an executive-heavy group pushing for greater national clout for Alberta and Saskatchewan; Buffalo was the proposed name of a single province that was actually formed as two in 1905. He’s discussed the grievances with each current premier, and says he backs the two forming a common front. The frustration, as ever, is hotter in more oil-reliant Alberta, Wall observes. “But I’ll say this: the intensity is greater in Saskatchewan than it’s ever been.”

In an industrial park on the Alberta side of Lloydminster, Daniela Tobler works in sales for Classic Oilfield Services, a firm that shed one-third of its staff in recent years but feels better off than most. She teaches yoga on the side and has joined colleagues at pro-pipeline rallies. Proposals to detach Alberta from Canada worry her—“It would be so much better if we could work as a team”—but she feels isolated from much of Canada when she sees anti-oil or anti-Alberta rhetoric, especially in online comments. “We can see people laughing and enjoying this economic downturn that we’re experiencing, and it’s like being kicked when we’re down.”

On a quiet weeknight in a bar at the western edge of the city, Lake is sipping beers with Dwight Newman, who lives in a nearby Alberta village but owns struggling oil wells in Saskatchewan. Newman was at the Wexit event and found the pitch unconvincing—he doesn’t think many people are serious about separating. But ideas like the Alberta Pension Plan appeal to him. “I think we need to do that because we cannot control federal politics,” he says. “We might as well control what we can control.”

They’re asked how the mood might improve under a Trudeau government. Economic growth would obviously help, but with investor and corporate confidence remaining low (like prices), nobody’s forecasting a big upswing in Canadian oil and gas. Like almost everyone else in these parts, Lake and Newman say a completed pipeline would ease the pressure—the PM has redoubled his commitment to the Trans Mountain expansion since his re-election, and the First Nations and environmentalist court challenges standing in the way of the government-owned pipeline project are fewer and narrower than the ones that thwarted it in 2018. But trust in Trudeau remains at record lows, like his dad’s unpopularity. “Here, he’s immediately seen as a negative right off the bat,” Newman says.

Even if Trans Mountain does go ahead, Newman worries that tensions may keep growing, as climate change becomes an increasing priority elsewhere, to the detriment of a fossil fuel sector striving to make itself greener.

But everyone here seems more anxious about the short term—how they can hang on if the half-decade slump keeps going. A federal Conservative win was supposed to provide a pick-me-up to the many local Trudeau skeptics; other material changes seem even further beyond Lloydminster’s influence. “People are Canadians, but they’re against the wall and they’re running out of options,” Lake says. “And they’re running out of time.”

Clarification, Dec. 10, 2019: The original version of this post suggested that the name Buffalo was for a proposed unification of Saskatchewan and Alberta; in fact, the Buffalo idea predated creation of the two provinces.

This article appears in print in the January 2020 issue of Maclean’s magazine with the headline, “A cold front forms in ‘Saskberta’.” Subscribe to the monthly print magazine here.