The Morning Playbook: The wild world of oil

April 9: Or up, then down, then down again. It's the wild world of oil – plus, Greece pays its bills, and legislating a balanced budget.

Let’s overlook everything else going on in the economy today and just look at oil, oil, and more oil (a lot more oil.)

Yesterday, amidst news of the third-largest oil and gas merger ever (between Royal Dutch Shell and BG), oil prices hit a swift high for the year –  and then promptly dropped nearly six per cent, on news that U.S. stockpiles hit a 14-year record. In fact, stockpiles were about three times bigger than analysts expected. This morning, oil is about $51.66, and we’ll have a closer look at this volatility below.

Today, we’re also looking at the influence of the U.S. Fed’s notes from their latest monetary policy meeting, where Fed officials agreed to disagree on when a rate hike would come. In Greek news, this morning the country successfully paid a debt bill due to the IMF for 450 million euros, allowing investors a sigh of relief – but there are many more such deadlines to come. The payment comes a day after Alexis Tsipras met with Putin in Moscow, and called sanctions on Russia “economic war,” pledging to restore the trading ties between the countries – in 2013, Russia was Greece’s biggest trading partner. While Russian assistance to an ailing Greece has been ruled out, as the country is facing its own recession over sanctions and oil prices, the move was seen as a blunt bit of political manoeuvring.

It’s a busy day in Canada today, with Statistics Canada releasing numbers on building permits and the new housing price index, Nova Scotia releasing its budget, and media earnings  from Corus and Postmedia. In the U.S., we’ll see numbers for initial claims, continuing claims, and wholesale inventories for February. Today is the second day of the Bank of England meeting, as well as the day the country releases its trade deficit numbers, while Germany releases news of its trade surplus – and German industrial expectations edged up once again, as European markets climbed this morning.

The wild world of oil. Yesterday was another big oil day, as the markets reacted to both news of a massive oil industry acquisition – and then fell six per cent on news that U.S. oil stockpile numbers once again broke records, adding almost 11 million barrels of oils to stockpiles just last week. Right now, stockpiles are more than 100 million barrels higher than they typically are this time of year, hitting more than 480 million barrels. Where’s all this oil coming from? Even as U.S. oil producers shut down wells, they’re still pumping at a brisk pace, as Saudia Arabia announced they pumped at a record 10.3 million barrels last month. That’s a lot of barrels.
As we noted yesterday, this pace is having a long-term impact on the shape of the industry, including speculation of a new era of major industry mergers after Royal Dutch Shell bought BG. The company had been on their radar for years, but with oil falling so substantially, the deal was sweet: even after paying a 50 per cent premium on the market price, the company said. The deal could put them ahead of ExxonMobil within a few years, but the biggest jump is in Brazil, where they will now be the largest foreign oil company in the country, and it will also give them a massive advantage in liquefied natural gas, even as they could also face antitrust regulations in certain markets.
As for when this situation will turn around? At Maclean’s, Jason Kirby takes on the idea of a quick rebound to task as volatility rocks the price of oil, arguing that you can’t take the current price out of context from 2008 — just as you shouldn’t take the 1986 crash out of context from declines in price that started six years earlier.

Legislating your way to a balanced budget. The Conservative government has pledged to present a balanced budget this month, even as the sudden drop in oil prices plowed a hole in Alberta’s budget and caused the federal government to delay announcing their own. Now, Finance Minister Joe Oliver has said he will propose a bill to require future governments to present balanced budgets – unless a crisis (with costs above $3 billion) forced them to do otherwise. This will be this government’s first balanced budget, with the budget at the height of the financial crisis including a $56-billion deficit to fund economic stimulus. You can read the whole speech on Maclean’s here. Balanced budget legislation is actually quite common: a report from the Parliamentary Budget Office in the autumn notes 28 out of 31 developed countries have some form of balanced budget rules (the three that don’t are Canada, the U.S. and Iceland), but what’s less common – particularly during and after the financial crisis – is countries sticking to those rules. Global has a useful summary of that report here.

The split inside the Fed. The release of the FOMC’s latest meeting minutes – the one where they dropped “patient” – shows there’s disagreement within the Fed about when the next interest rate should come, between those officials who think June would be an ideal time to hike rates, and those who are looking toward the end of the year, or even 2016. Agreement behind dropping the key “patient” was apparently unanimous, opening the door to hike rates by mid-year, but Yellen has pledged to watch the data, and last week, that included an underwhelming jobs report, as well as a strong U.S. dollar, which could have a negative impact on exports.

The euro sculpture needs a bailout. If you’ve ever seen a story on the euro and the European Central Bank – not typically a source of rousing visuals – you’ve seen Frankfurt’s “euro sculpture,” a big blue euro sign surrounded by stars. But you probably haven’t seen the close up of the 46-foot-sculpture, where stickers and vandalism litter the bottom, the lightbulbs are burnt out, and protesters occasionally camp out. (Although it could be a great opportunity for illustrating stories on exhausted eurozone negotiators.) The sculpture was installed in 2001 as a marketing tool, according to the Wall Street Journal, one of two euro sculptures in the city to promote the common currency – the other was in the airport, and has since been removed. The statue is owned by a local group, who say they pay from 15,000-30,000 euros to maintain it every year, but as its lightbulbs burn out, so the costs increase – and they’re asking local banks to chip in. Unsurprisingly, local artists hate the thing, although they may appreciate the irony. And now, for your viewing pleasure: 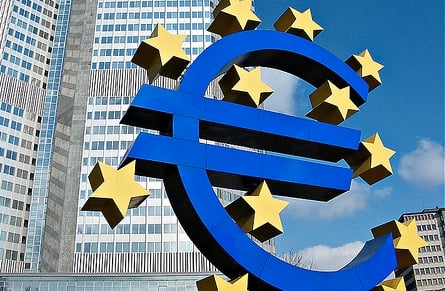