NAFTA talks should stick to helping consumers and taxpayers, not pet clauses

Opinion: Free trade agreements like NAFTA have massively benefitted people. Here are three principles negotiators should keep in mind to ensure that continues. 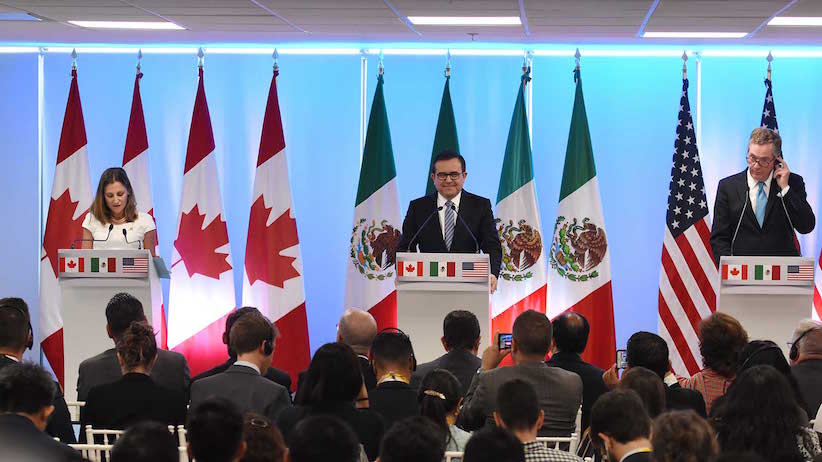 With the U.S. under Donald Trump, a mostly positive trade agreement in effect since 1994 is about to undergo a re-think. The North American Free Trade Agreement (NAFTA), which followed up an earlier Free Trade Agreement between Canada and the United States, has mostly served Canada well. That’s because open trade and the growth of free enterprise around the world in general has lifted hundreds of millions out of poverty, and increased employment in North America specifically.

Which is to say, before Trump and Prime Minister Justin Trudeau set about to re-do an otherwise successful agreement, they and those acting on their behalf might well remember the point of free trade agreements. Otherwise, they risk cratering that which has benefitted entire populations, including their own.

Consider as a primer what freer trade accomplishes: In the post-war era, and especially with the collapse of the Soviet Union in December 1991—and with it the notion that governments could centrally direct an economy—a growing number of economies rejoined the normal human preference and practice of free enterprise.

READ: Patriotism is a disastrous way to make trade policy

Those nations reaffirmed what men and women have done since the first fisherman in ancient Mesopotamia sold his catch and later, with the proceeds, bought fruit from some Babylonian vendor: both the fisherman and the fruit-seller acted voluntarily in exchanging goods based on mutually agreed-upon prices.

That simple reaffirmation of human behaviour in ever-more countries in the post-war period led to a dramatic increase in wealth creation in real terms, and a significant reduction in the world’s poor. It includes east Asia in the 1970s (recall China’s late-70s market-friendly reforms under Deng Xiaoping), former Soviet central and eastern European countries in the 1990s, as well as other countries that for much of the 20th century were highly interventionist, such as India.

The worldwide poverty decrease included dramatic reductions in India, Indonesia and East Asia. (The late British economist Angus Maddison credited open trade as one of three factors that mattered to income growth and poverty reduction, along with innovation and settlement of relatively sparse areas.)

For NAFTA countries, free trade has been beneficial, not harmful, as the increase in employment demonstrates: 40 million more people are at work now in Canada, Mexico and the United States as compared with 23 years ago at the start of NAFTA.

To be sure, not all of that North American increase is due to NAFTA. Before the three-country trade agreement came into effect in 1994, much of the trade between the three nations was already free. But what the original free trade agreement and NAFTA did was solidify a rules-based trading system, which is something that should continue. As such, here are three principles for the negotiators to take forward and for everyone to remember.

Principle one: NAFTA negotiators should give preference to taxpayers and consumers over producers.

An example: In trade agreements, governments usually agree not to prefer so-called domestic companies over foreign ones. Part of the reason is that in a world in which companies are widely owned by shareholders, including pension funds in multiple countries, it makes little sense to even conceive of companies as “domestic” or “foreign.”

Even where a workforce is mainly local, openness to competition is a major benefit for taxpayers and consumers. Without it, any preference for at-home companies in procurement leads to cartel-like higher pricing and lower quality goods and services. Instead, free trade prods local companies to up their competitive game.

Also, for smaller countries such as Canada, unimpeded access to larger markets—the United States, the European Union or Asian countries—allows Canadian-based firms to diversify their risk away from just the domestic Canadian market, which also shields their Canadian employees from such risk.

Both the Trump and Trudeau governments have their pet hobbyhorses, and both are antithetical to actual free trade.

For Trump’s negotiators, it is attempts to demand “Buy American” exceptions. For the social engineers within the Trudeau government, its attempts to require so-called “pay equity” or gender equality issues—neither of which is about unequal pay for equal work, which has long been illegal in both countries. Instead it is about the more nebulous concept of equal pay for work of equal ‘value’, between ostensible mainly female jobs or mainly male jobs. Both sides’ demands would harm free trade, and with it the prosperity and poverty reduction which has thus far occurred.

In the original Canada-U.S. Free Trade Agreement, domestic protectionism that had long made Canadian wine nothing more than expensive plonk was done away with. Beyond initial, temporary subsidies for Canadian wine producers to re-plant vines, allowed in the 1980s-era deal, the wine industry was on its own. It has since flourished precisely because governments stopped coddling it.

There is another sector today that ought to be negotiated out of protectionism in any new trade talks: the supply-managed dairy and poultry sectors. Defenders of the current approach oppose opening up dairy and poultry farmers to competition.

That’s the wrong tack. They should instead think big: Press the Americans to end subsidies for their farmers and reach a deal beneficial to the taxpayers and consumers in both countries.

The irony of protected sectors—wine in the 1980s or dairy and poultry now—is that such protection does nothing for the long-term efficiency of an industry. It is anti-free trade and, of course, unfriendly for consumers; it only preserves a cartel approach to a tiny market (Canada’s) instead of opening eyes to the potential of much bigger markets for goods and services outside Canada’s borders.

Free trade is fundamentally a force for good, from poverty reduction to better-priced and superior goods and services. That’s what negotiators, a president and a prime minister, as well as the public, should all remember and seek.