Premier Kathleen Wynne says if the owners want to challenge Ontario's new minimum-wage policy, they should come directly to her and not take it out on workers 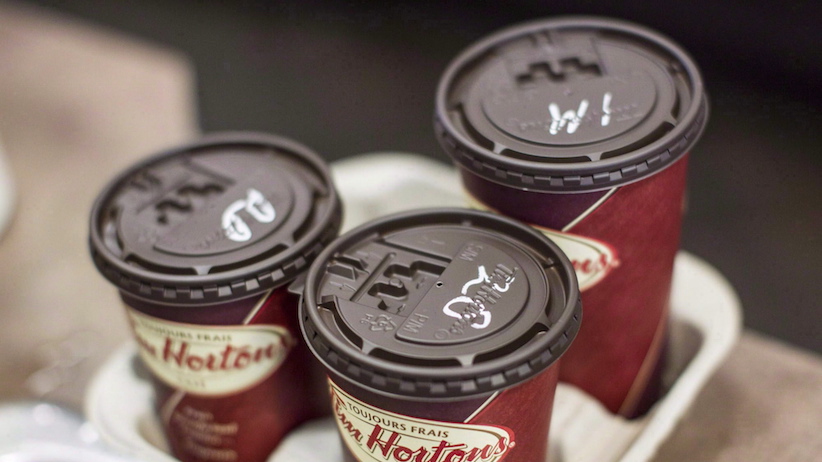 Cups of coffee sit on a counter in a Tim Hortons outlet in Oakville, Ont., on Sept. 16, 2013. THE CANADIAN PRESS/Chris Young

The premier of Ontario is accusing the children of Tim Hortons’ billionaire co-founder of bullying their employees by reducing their benefits in response to the province’s increased minimum wage.

In a letter to workers at two Tim Hortons restaurants in Cobourg, Ont., Ron Joyce Jr. and Jeri Horton-Joyce said that as of Jan. 1, staff would no longer be entitled to paid breaks, and would have to pay a portion of the costs for dental and health benefits to offset the $2.40 jump in the hourly minimum wage.

Employee breaks will also no longer be compensated, the letter dated December 2017 read. For example, those working nine-hour shifts will be paid for eight hours and 20 minutes, while those on three-hour blocks will be paid for two hours and 45 minutes.

“We apologize for these changes,” the letter, widely circulated on social media, read. “Once the costs of the future are better known we may bring back some or all of the benefits we have had to remove.”

Premier Kathleen Wynne says if Joyce Jr. wants to challenge the Ontario government policy, he should come directly to her and not take it out on his workers.

While the changes announced in the letter are not a violation of Ontario’s Employment Standards Act, Wynne says she wants Joyce Jr. to reverse his decision.

A spokeswoman for the Great White North Franchisee Association, a group created last year to give voice to the concerns of some Tim Hortons franchisees, confirmed that the couple penned it.

The cutback in benefits and wages at their two locations, which came into effect Jan. 1, follow the rise in Ontario’s minimum wage from $11.60 an hour to $14 this week. The couple also wrote that the changes come in anticipation of another $1 bump at the start of 2019.

The owners also pointed to “the lack of assistance and financial help from our head office and government” in the letter and said their decision follows “intense discussions with management and numerous small business owners in the area and other franchise owners.”

A Tim Hortons spokesperson declined to comment on the couple’s statement, but said franchisees are responsible for handling all employment matters, including benefits and wages, at their restaurants while complying with all applicable laws and regulations.

“Our focus continues to be on supporting our restaurant owners by growing sales and profitability through a balanced and multifaceted strategy while ensuring we provide our guests with great experiences,” the spokesperson said in an emailed statement.

Ontario’s Employment Standards Act, which requires employers to give workers a 30-minute eating period—or two shorter breaks that add up to 30 minutes, if the employee agrees—if a shift lasts more than five consecutive hours. These do not have to be paid.

Additional breaks only have to be paid if the employee is required to stay on premises, said an Ontario Ministry of Labour spokeswoman. A nurse who must stay in a hospital lounge during his or her break, for example, would have to be paid, she said.

The minimum wage hike and other new franchisee costs, like vacation pay, have put Tim Hortons franchisees in “a difficult situation,” said a statement from the GWNFA’s board of directors.

The GWNFA, whose membership hit half of all Canadian Tim Hortons franchisees last October, said its goal is to mitigate job losses.

But without help from their parent company in lowering food costs, raising prices and reducing couponing, the association said franchisees have been forced to take steps to protect their business.

“While other competitors have received concessions from their franchisors, unfortunately our chain has not,” the GWNFA said. “Many of our store owners are left no alternative but to implement cost-saving measures in order to survive.”