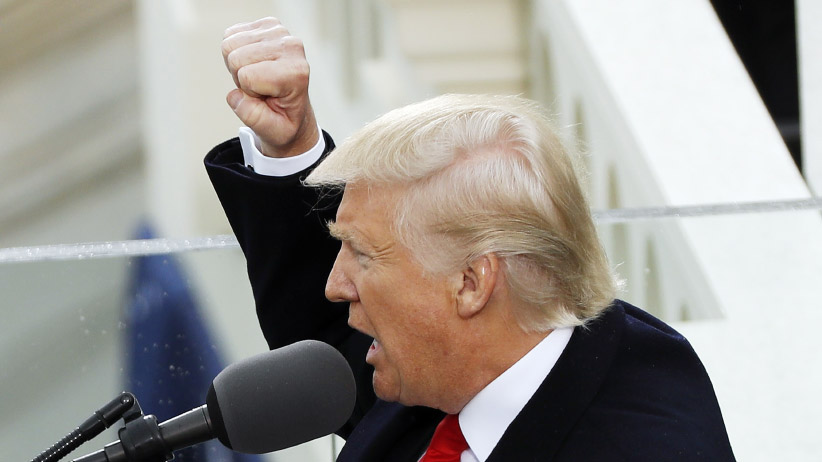 US President Donald Trump speaks after taking the oath of office during his inauguration at the U.S. Capitol in Washington, U.S., January 20, 2017. (Kevin Lamarque/Reuters)

VANCOUVER – As the latest Trump hotel gears up for its official opening in Vancouver on Tuesday, some experts are expressing doubts about the fate of the newest addition to the city’s skyline thanks to billionaire businessman Donald Trump’s polarizing behaviour as president of the United States.

Simon Fraser University’s Lindsay Meredith predicts Trump’s actions, which include a foiled executive order to ban visitors from seven majority-Muslim nations as well as lewd comments about women that surfaced during the presidential race, will take a toll on the bottom line of his luxury hotel brand.

“We know it takes a long time to build brand awareness and brand value, and we know you can blow it away in seconds flat if you’re not careful,” Meredith, who teaches marketing at the Vancouver-area university, said Monday.

“Any CEO better give his head a shake if he thinks he can get away with doing or saying absolutely anything and that there’s not going to be repercussions for either the corporation or the many brands that it encompasses.”

Trump’s adult sons, Donald Trump Jr. and Eric Trump, are expected to attend the grand opening of the Trump International Hotel and Tower Vancouver. Hundreds are expected to protest outside the downtown building.

Meredith explained how powerful a hotel’s reputation can be, regardless of how well it is run, especially when serving an extremely affluent clientele, which he described as “the 0.1 per cent.” He likened the business of catering to the ultra rich as an intricate dance, where the slightest misstep could mean disaster.

“You can’t afford to have errors when you’re dealing on this really, really high-end markets. All the pieces have got to work well. You can’t just have an outstanding hotel. it’s got to have a crystal-clean image as well,” he said.

Fellow Simon Fraser University business Prof. Steven Kates offered a different opinion, speculating that the Trump brand wouldn’t suffer thanks to the ambivalence of the hotel’s target market, or even their outright support.

“I don’t think the effect on the Trump brand will be all that profound, unless there’s a major scandal and people actually turn against him,” Kates said.

“And considering what he’s done in the past, that’s not happened, so in the future it’s hard to imagine a scenario under which he would lose his broad base of support.”

June Cotte, a marketing professor at Western University’s Ivey Business School in London, Ont., said that while the greater public may not be able to afford to stay at a Trump hotel, they can still have a powerful impact on the enterprise.

“The high-end, exclusive clientele does not necessarily want to deal with protests and demonstrations and police presence, etc. They’re usually looking for a discreet, high-end experience,” Cotte said.

“If I’m going to choose between another luxury brand, like a Four Seasons, for example, and a Trump brand, why wouldn’t I choose the one that does not have riot police in front of the property?”

In terms of reversing a negative image, Cotte said undoing damage is especially challenging when the brand is attached to a particular person, as is the case with Trump.

She pointed to Martha Stewart as another example, citing the lifestyle guru’s fall from grace following a conviction for insider trading, and the painstaking effort to rebuild.

“Given the level of public interest in (Trump) right now, I don’t think that would be easy,” Cotte added. “I think people would label a rebranding effort as sort of a sham.”