Trump's America actually has a trade surplus with Canada

The U.S. trade deficit is a major reason President Donald Trump promised to renegotiate trade agreements, including the North American Free Trade Agreement (NAFTA). There is near unanimous consent among economists that tying trade deficits or surpluses to trade talks is either baffling or just plain stupid, but this has not dissuaded the U.S. administration from making a reduction of its trade deficit a priority in the NAFTA negotiations.

The U.S. continues to use arguments about trade deficits to beat up on Canada and Mexico in the NAFTA negotiations. If President Trump and U.S. Trade Representative Robert Lighthizer can’t be convinced by economic consensus, perhaps walking them through the numbers would work. First, the U.S. has an overall trade surplus with Canada. Second, by importing discounted Canadian crude to refine and export, the U.S. benefits from jobs and wealth.

The U.S. has an overall trade surplus with Canada

It’s true the U.S. has had a consistent trade deficit in its total trade with the world since 1976. But taking the trade in both goods and services into account, it actually has an overall trade surplus with Canada.

While the U.S. has a trade deficit with Canada in merchandise trade (the trade of goods), its surplus in the trade of services like transport, logistics, tourism and finance between the two countries bumps the combined trade into a surplus in the U.S.’s favour.

If the U.S. is going to come to the table adamant about reducing its trade in-goods-deficit, maybe Canada should push back just as adamantly about reducing our trade-in-services deficit.

The U.S. relies on Canadian crude

The second largest component of the trade in goods between Canada and the U.S. is mineral products, thanks to crude oil in particular. If the Americans are going to insist on reducing their trade deficit with Canada, it stands to reason that reducing the amount of Canadian oil flowing into the U.S. would be part of that equation.

This is great example of the old saying, “be careful what you wish for.”

Thanks to the shale oil boom, the U.S. recently began to produce more crude oil than it imports. Yet, as indicated in the figure below, it is still reliant on crude imports. Last year, the U.S. imported nearly as much crude as it produced domestically.

In fact, the U.S. Midwest and Rocky Mountain regions—known as PADDs 2 and 4—are completely reliant on Canada as a crude import source. Ninety-eight per cent of PADD 2’s crude oil imports are from Canada, and Canada supplies all of the crude imports to PADD 4. 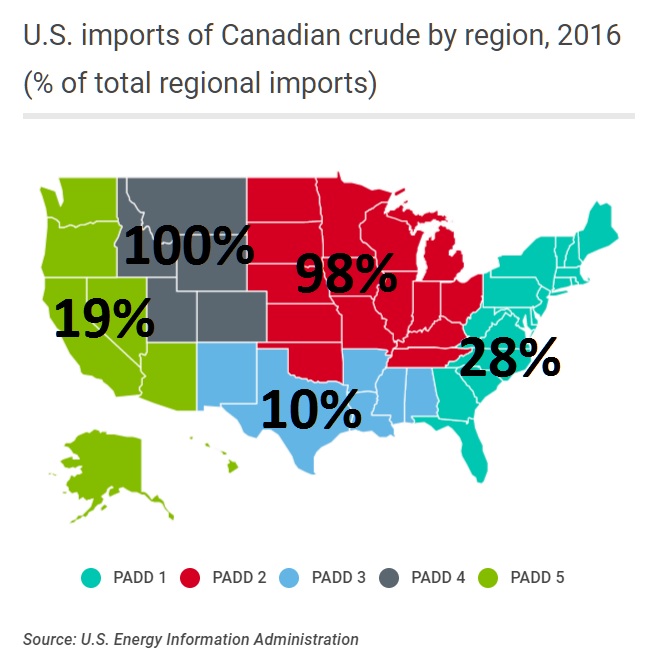 The U.S. refines crude oil—including the imports from Canada—both for its own consumption and export. And this is where things get interesting.

Since 2011, the U.S. has exported more refined products than it imports. In 2016, of all the countries in the world, the U.S. exported the highest value of refined oil, earning more than US$64 billion. Using the average Canada-U.S. exchange rate in 2016, this converts to nearly C$85 billion—$9 billion more than the value of Canada’s merchandise trade surplus over the U.S. A significant portion of that crude oil the U.S. refined into products to export—and make money off of—were sourced from Canada.

The U.S. benefits from importing discounted heavy crude from Canada

The majority (74 per cent) of crude oil shipped from Canada to the U.S. is heavy crude. There are a couple reasons why Canadian heavy crude sells at a discount. The average price of heavy crudes is lower than lighter crudes, and Canadians also get dinged on the cost of transportation. Shipping Canadian crude by pipeline or rail can cost producers $10 to $20/barrel. Producers in Mexico and the Middle East have the advantage of being able to ship their crude to the U.S. via tanker for just a few dollars/barrel. That’s part of the reason Maya crude from Mexico, which is extremely similar to heavy oil from Canada, sells at a higher price than Western Canadian Select blend.

Because Canada is a landlocked market with infrastructure that only allows for the export of crude oil to the U.S., the U.S. does not have to compete with any other customers for discounted heavy oil from Canada. It doesn’t have to offer a higher price to ensure it receives the supply it requires.

Canadian heavy oil is perfectly suited for the refineries in the U.S. Gulf Coast (PADD 3) configured to process heavy oil. While Canada supplied only 10 per cent of Gulf Coast crude oil imports in 2016, imports of Canadian crude to the region are increasing as crude imports from Mexico decline.

In the last two years, for the first time, the value of U.S. energy exports to Mexico (mainly petroleum products) has been greater than the value of energy imports from Mexico (mostly crude oil). Last year alone, the value of U.S. energy exports to Mexico (US$20 billion) was more than double the value of its energy imports from Mexico (US$8.7 billion). Mexico’s demand for U.S. gasoline is expected to increase. Mexico’s gas consumption is rising while its refineries can’t keep up with demand, due to production difficulties that include frequent outages. In 2016, U.S. refineries provided more than 50 per cent of the gasoline consumed in Mexico in multiple months.

The conditions precipitating this change—lower volumes and value of crude oil from Mexico, and increasing demand from Mexico for refined products from the U.S. as prices rise—may not be the new normal. But while these conditions do exist, the U.S. pocketbook is clearly benefiting. Yet, the U.S. Administration paints its trade relationship with Mexico with a broad brush in decrying the trade deficit with that country that “steals jobs and drains wealth.”

While the U.S. frets over its various trade deficits with its NAFTA partners, it misses a critical point by looking only at the highest level of data. NAFTA eliminated tariffs on crude oil, gasoline and some other refined products, enabling greater and more flexible trade in energy products between the three partner countries. The example of crude oil alone shows how the U.S. makes money off buying a product from its NAFTA partners, processing it, and selling the finished product at a higher price—back to its NAFTA partners. NAFTA created a web of supply chains in the trade of countless goods and services. If the U.S. starts to unravel it, they could soon find some real negative consequences to complain about.