What do Trump's tariffs mean for Canada?

Steel industry expert Peter Warrian explains how badly this will hurt steelmakers, what the knock-on effects will be and why dark times loom 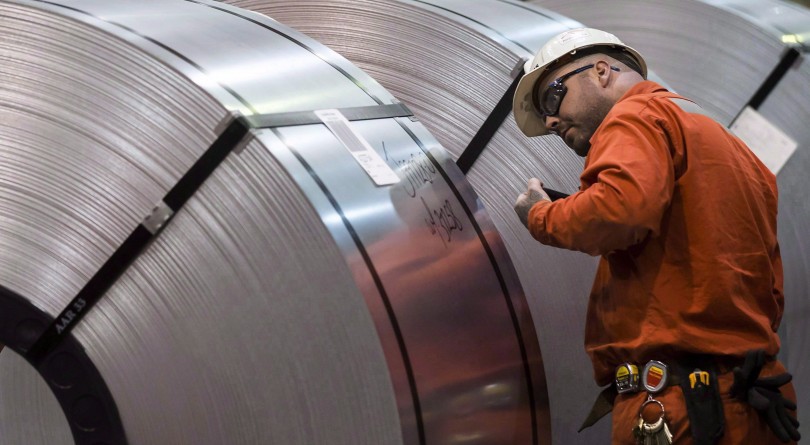 On Thursday, U.S. Commerce Secretary Wilbur Ross announced that as of midnight, the Trump administration would subject Canadian steel imports to a 25-per cent tariff and aluminum to a 10-per cent tariff.

The reaction came fast and furious, with Prime Minister Justin Trudeau declaring the tariffs “totally unacceptable” and announcing retaliatory duties on a broad range of goods from the U.S.

Maclean’s talked to Peter Warrian, a steel industry expert and senior research fellow at the Munk School of Global Affairs at the University of Toronto, about what exactly these tariffs will mean, what effect they will have on jobs and the economy and whether trade wars are, in fact, good and easy to win (spoiler: they are neither).

Q: Can you walk briefly through the sequence of events that led to this point?

A: The Trump administration gave notice they either wanted to end NAFTA or renegotiate NAFTA, which is a huge, complicated deal.  And then—not unrelated, but separate from that—was the steel and aluminum tariff initiative.

The big story on NAFTA is really the automotive sector. But automotive is the biggest consumer of steel, therefore it gets linked into the larger piece.

Q: Can you put into perspective what a 25-per cent import duty on Canadian steel actually means?

A: First of all, it’s movement of steel into the States, and most of that is by truck. So you can imagine a truckload of steel that’s got an order in Chicago pulling up at Detroit, and as of midnight, whatever the value of the order is to the customer in the United States, there’s going to be a demand for an extra 25 per cent cash in advance before that truck can enter the United States.

Q: On what end would that 25 per cent end up being paid?

A: It’s going to be something of a ping-pong game. Ostensibly, the American purchaser, if he wants to get the steel delivered, has to pay the extra 25 per cent, but of course that person’s going to say, “I bought this steel for $600 a tonne, what do you mean it’s $750? You pay it.” You’re probably going to start to see trucks backed up at the border.

Q: Are we going to see pressure for Canadian suppliers to knock down their prices to compensate?

A: Absolutely. And also, steel is ordered in cycles that are often from six weeks to six months, so now you get uncertainty in the market for what it’s going to be down the line. The normal cycle would be you’re ordering your steel six weeks in advance of whatever you’re manufacturing, and sometimes it’s longer.

Q: What option does that leave for Canadian producers if they’re told, “Give me a 25 per cent discount or I’m not taking it”?

A: Well, you can return the steel to your delivery yard, or you can see all of your profits go away.

Q: What about for the American purchasers, do they have other options?

Q: How big is the steel industry in Canada right now, and what is its relative importance in the Canadian economy?

A: It will produce about $16 billion worth of goods a year. It would employ about 30,000 people directly, but there would be at least 70,000 more indirectly. And (a large) percentage of consumer products have some steel in them—even the iPhone. It’s much broader than just a bunch of old smoke stacks around Hamilton.

Q: How has the size or robustness of the industry changed over time?

A: We still consume as much steel as we used to—in fact, it goes up about one per cent a year. But it’s become so productive, it doesn’t employ as many people. So if you backed up the clock 25 years, into the heyday, it took seven man hours to produce a ton of high-quality steel. Now, it’s 1.25. So you’re consuming as much steel as you ever did, but the number of direct jobs is not what it was.

Q: What proportion of Canadian steel is going to the U.S.? How much of our industry is directly affected by these tariffs?

Q: What are the ultimate product uses for Canadian steel in the U.S.?

READ MORE: Aluminum and steel tariffs: How Canada should react to Donald Trump

Q: Does that mean we’ll see prices rising in the U.S. for those products or is the effect going to be on the supplier side in Canada?

A: The near-term is going to be an increase in prices in the United States: prices rise in the States, production probably falls in Canada.

The question is what’s Canada going to do? The government has a very difficult situation, because under international trade rules, if somebody hits you on steel and you want to retaliate or reply back, you’re not restricted to steel—you can reply to anything. That’s how trade wars start.

Q: The government is talking about “defending” the industry and taking retaliatory measures, what realistic options do they have?

A: I think there’s still enough common sense out there—and self-interest—that they have to finish these NAFTA negotiations. If that takes place, then I think the steel and aluminum stuff gets solved within that context relatively easily. But if the whole thing comes unstuck, then we’re looking at some very dark times for everybody.

Q: Foreign Affairs Minister Chrystia Freeland has emphasized that Canada sees S. 232 as entirely separate from NAFTA—can you explain what that is?

A: There are a set of rules that apply internationally in the NAFTA rules. The Americans have this 232 rule, which is a feature of U.S. law. It says the United States can take action against tariffs if “national security is threatened.”

It’s pretty tough to think that Canadian steel is threatening U.S. national security. But they’re saying the NAFTA rules were grandfathering in all the U.S. trade rules. I think they’re wrong on that, Freeland’s making the right argument, but the [Americans] could say, “Yes, we agreed to NAFTA, but we always reserved the right, because of our position in the world, to use 232 against anybody.” I think it’s baloney, but that’s the argument.

Q: Freeland has also pointed out repeatedly that the U.S. actually has a trade surplus with Canada on steel. What does that mean?

Q: What does that mean for President Trump’s stated justification for this move? He’s talked a lot about the U.S. getting a raw deal.

A: He’s trying to say that all the world—and Canada is among the sinners—have these huge trade surpluses with the States, and that’s destroying American jobs and it’s unfair, and it was all these lousy trade agreements from the past. Like most things he says, the factual basis is nothing like that. But that’s the political rhetoric for him to invoke 232, because 232 is actually an issue about politics more than about economics.

If the Americans simply declared an end to NAFTA, the biggest industry effect would be automotive. A Canadian-made car has got about 40 per cent U.S. content in it. A Mexican-made car has about 35 per cent U.S. content in it. So if you shut it all off and end NAFTA, there will be a direct loss of about 37,000 American jobs, which is not exactly what Trump is telling his base—and there’s indirect jobs on top of that. But that’s not how it’s being broadcast.

Q: What actually happens in a trade war? Who ends up suffering?

Let’s be humble Canadians for a moment: we are a small piece of a much larger pie, so the Europeans and the Chinese already have their lists: “You want to slap us with that stuff, here’s what we’re going to do.” The Chinese are smart, they’re going after soybeans, because there are about four or five U.S. states that are major exporters of soybeans and agriculture products to China. The Europeans already have their lists. So we can look at that as entertainment value, but it’s actually dangerous.

A major cause and effect of the Depression, when we went from a booming economy of the 1920s to a Depression in the 1930s, was a trade war. Everybody started to raise tariffs against everybody else. That’s the risk: everybody loses.

Q. Is it difficult even to back down from the point they’re at now?

A: There will have to be some face-saving stuff. That’s what Minister Freeland has to work out. My guess at a high level is some of that will go on and they’ll declare victory. Secondly, there’s some very complicated deep stuff where we’ll get some concession on goods, but the Americans will get some long-range troubling things on intellectual property.

We’re at the mercy of the chaos of the White House. It doesn’t make any logical sense. It has more to do with American domestic politics than it does with trade and economics.