What’s the impact of Brexit on London? 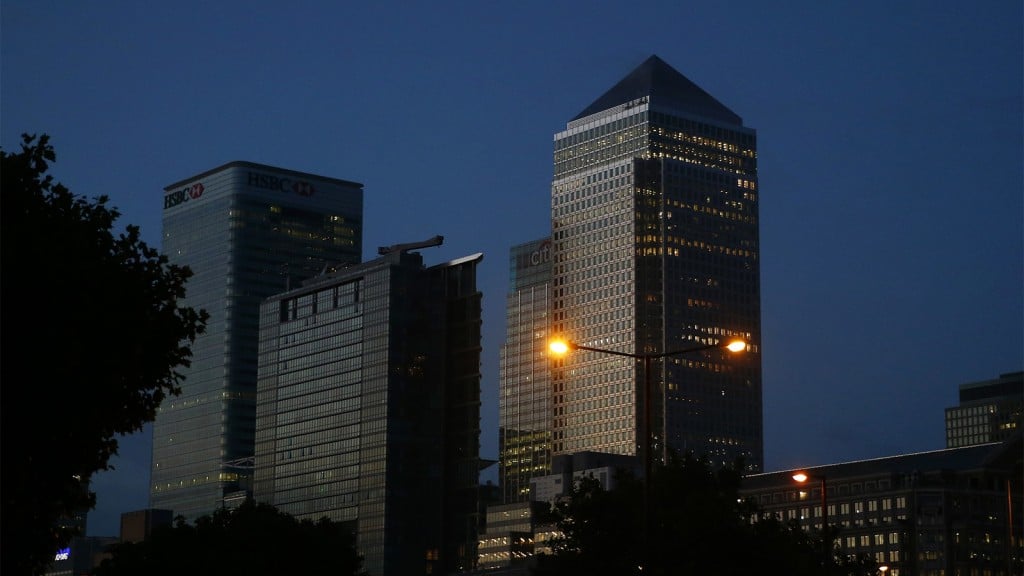 Office lights are on in banks as dawn breaks behind the financial district of Canary Wharf, in London, Britain June 24, 2016. (Neil Hall/Reuters)

Home to more than 250 foreign banks and the world’s largest foreign exchange market, London has grown into a glittering global financial hub that, according to a 2015 ranking, now tops New York. But following the U.K.’s vote to leave the European Union, the British capital’s status as pinstriped powerhouse is suddenly being called into question—along with tens of thousands of high-paying jobs.

Foreign financiers gravitated to skyscrapers in the City of London and nearby Canary Wharf over the past four decades for two main reasons: London is an English-speaking European capital (English is the language of global finance) and, thanks to the EU’s “single passport” system, all U.K.-headquartered banks are permitted to seamlessly open branches or offer services throughout the 28-member—soon to be 27-member—block. “Without these ‘passports,’ U.K.-headquartered banks can still open branches,” wrote Bank of Montreal senior economists Jennifer Lee and Benjamin Reitzes in a report released Thursday, “but they will be subject to more restrictions and regulations.”

Already JPMorgan Chase & Co. has said it could slash as many as 4,000 positions while HSBC, a British bank no less, has suggested it could move 1,000 jobs to Paris, according to the Financial Times. Other financial institutions have similarly indicated they may move jobs to Frankfurt, Lisbon or elsewhere in Europe. A big factor in determining the size of the exodus will be the U.K.’s success in negotiating a new deal with the EU over the coming months and years, that maintains a similar level of access to the EU’s market of 500 million people. Some estimates have pegged the total potential job losses in the city as high as 100,000.

With that many people packing up their desks, there are bound to be knock-on effects throughout the capital. Some are predicting a sudden end to London’s hot housing market, which has grown by double-digits in recent years, and a downturn of as much as 18 per cent in commercial real estate prices.

There are, however, a handful of finance types who believe “Brexit” will be better for business. Edmund Truell, a private equity investor and an adviser to Boris Johnson, the former London mayor who campaigned to leave the EU, told the Wall Street Journal the result was “phenomenal” and that the City “will be freed from the stranglehold of directives, blizzards of rules and costly regulations” that came with EU membership.

But given the British pound lost 10 per cent of its value at one point Thursday, its worst performance ever, and several European banks saw their stocks hammered, along with most of the world’s indexes, few in the City have much to celebrate—nor will they any time soon.