This country is 'a flea on China's shoulder,' says one expert, and is best advised to ride the rough patch out 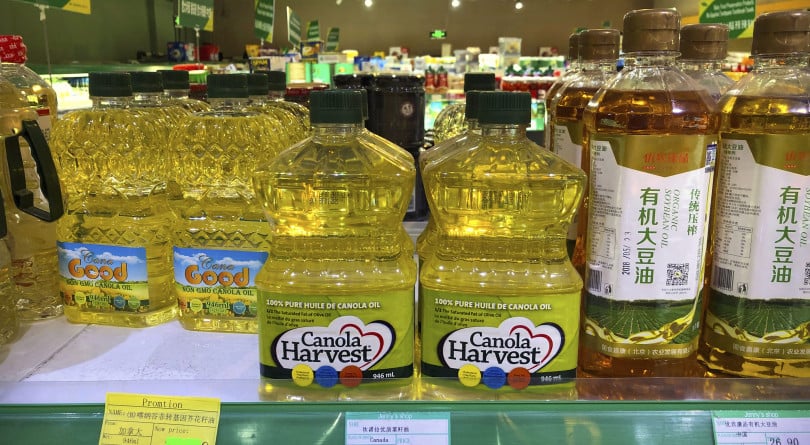 One year ago, Canadians couldn’t grow enough canola to meet Chinese demand. Between canola seed, canola oil and canola meal, the Chinese imported roughly $4 billion worth of the oilseed crop from Canada, according to an analysis from the Canada West Foundation. Couple that with an escalating trade spat between the U.S. and China, and market analysts were predicting record canola shipments from Canada to China in 2019.

Then, in March, China suddenly reversed course—blocking shipments from two of our biggest exporters because they were supposedly contaminated with pests. It mattered not that Canada said otherwise. Prairie farmers were left wondering what do with no access to their primary market.

It didn’t stop there—which is why most observers believe the action had more to do with Beijing’s anger over the arrest of Meng Wanzhou than with defective Canadian crops. Canadian exporters then reported roadblocks as they tried to send peas, pork and soybeans to China. The delays ranged from unusually long inspections to newfound paperwork problems. There’s no reason to think other products won’t soon be targeted.

So, as China seems to be targeting Canadian exports, acting as though the two countries are locked in a trade war, why isn’t Canada retaliating? The answer may simply come down to a matter of size.

RELATED: The five stages of China’s fury towards Canada

“We need China—and China doesn’t need us,” says Sarah Pittman, a policy analyst with the Canada West Foundation. “Retaliating would probably be satisfying, because we’re definitely being jerked around, but it might not be what’s best in terms of the Canadian economy.”

Take canola. Canada really only exports in serious amounts to five countries, according to Pittman: China, the U.S. Mexico, Japan and Pakistan. Over the last decade, however, only the U.S. and China have dramatically ramped up their intakes. China became Canada’s biggest market, buying upwards of $4 billion worth of product in 2018, according to a Canada West analysis.

But if it wanted to cut out Canadian canola entirely, China could simply find another market from which to buy, Pittman says. Canada, on the other hand, would be hard pressed to find anywhere else to sell the product—especially in such quantity.

Nor could Canada do much damage to the Chinese economy by engaging in a trade war—even if Saskatchewan Premier Scott Moe is calling on Ottawa to consider ““reciprocal” trade tactics as his province’s farmers feel the negative effects.

“If we hit China with a tariff on, let’s say, auto parts, we’d then import it from Vietnam from a firm owned the Chinese,” says Daniel Trefler, a professor of economic analysis and policy at the University of Toronto’s Rotman School of Management. “As far as the Chinese elite are concerned, they don’t care.” The Chinese elite, who are Communist Party members, own those factories, too, Trefler continues, and if a little bit of employment is lost in China for the sake of the Party, they won’t consider it a huge deal.

Canada can take some small comfort, though, knowing it is not alone. “This is something the Norwegians and South Koreans have experienced. It’s something the Japanese have experienced,” says Loren Brandt, a professor of economics at the University of Toronto. “It’s the way China decides to use trade to address political issues.”

RELATED: Who lost China? And how was Canada supposed to win it?

After 2010, for example, the Chinese government implemented what was effectively an unofficial partial embargo on Norwegian salmon, in what appeared to be a retaliation to Norway’s parliament for awarding of the Nobel Prize to a Chinese dissident. The ban was finally lifted last year—and Norwegian salmon exports to China quickly tripled.

“What does Canada have that’s incredibly important to China?” asks Brandt. “There’s a lot of other countries from where you can import canola or pork bellies or raw materials. Canada just doesn’t have a lot of leverage here. You can say all the things Canada should do, but it’s hard to see how this would play out.”

Some experts have floated out the idea of targeted sanctions—freezing assets or imposing travel bans on specific individuals, rather than trying a trade embargo. Conservative leader Andrew Scheer suggests Canada pull the hundreds of millions the country has invested in China’s Asian Infrastructure Investment Bank.

But if we try to escalate, says Pittman, “China can do a lot more damage to Canada than we can do to them. It should be framed more in how to limit harm to Canadians rather than retaliating.”

She instead suggests Canada engage China in a non-tariff barrier agreement, meaning when China says some Canadian canola has pests, and Canada’s producers claim otherwise—as is currently happening—there’d be set resolution process in place that would forestall the disruption of trade.

Of course, Pittman will be the first to agree it’ll be tough to get China to sign on with such an agreement—given the current political climate.

RELATED: Is Canada addicted to Canola?

Says Trefler: “We’re a flea sitting on China’s shoulder. The only reason we have their attention at all is because a very important person from China is suffering because of the extradition proceedings.”

That VIP is Meng, the Huawei chief financial officer—and daughter of the telecom company’s founder—who remains out on bail in B.C. as she awaits her U.S. extradition hearing, confined to her multi-million-dollar Vancouver mansion after daylight hours, among other surety and monitoring requirements.

Since her arrest, Canadians Michael Spavor and Michael Kovrig remain detained in China—having not seeing their families since they were apprehended under dubious charges before Christmas. Abbotsford, B.C.-native Robert Schellenberg had his 15-year prison sentence for drug-related charges in China appealed—by the state—and was later sentenced to the death penalty in a rushed re-trial.

On Tuesday, a second Canadian was given to a death sentence for drug-related charges, according to the South China Morning Post—six years after his trial first began.

Prime Minister Justin Trudeau recently announced financial aid for canola farmers. Trefler says he approves of Ottawa avoiding any tit-for-tat with China—difficult as it might be; the government is instead emphasizing at every juncture that Meng’s extradition hearing is a judicial process, not a political one.

“You try to ignore the day to day and you wait until the most important date: the extradition date for the Huawei executive,” he says. “We have no leverage on China, unless we wanted to go nuclear and eliminate all Huawei activities in Canada, including their funding in our universities.

“We can’t end all manufacturing trade with China. All these would be huge blows to the Canadian economy—and minor blows to China.”