Why Covid-19 finally makes the 'essential economy' impossible to ignore

Economist Armine Yalnizyan on what the economy will look like after the pandemic, and how decades of spending cuts left Canada ill-prepared when the crisis struck 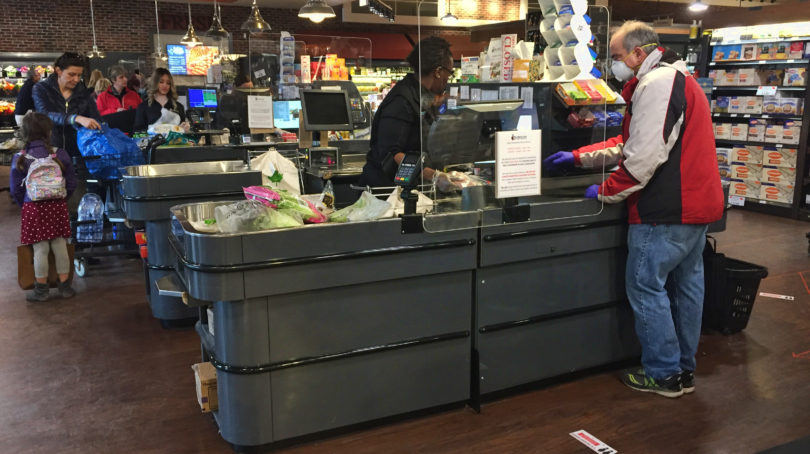 Cashiers behind newly installed plexiglass (acrylic) shields to protect them from the novel coronavirus (COVID-19) at a grocery store on April 03, 2020 in Toronto, Ontario, Canada. (Photo by Creative Touch Imaging Ltd./NurPhoto via Getty Images)

Armine Yalnizyan is an economist and author based in Ottawa. She is currently a fellow with the Atkinson Foundation, working on a project on the future of workers. She recently served as senior economic policy advisor to the deputy minister of Employment and Social Development Canada, and was previously senior economist of the Canadian Centre for Policy Alternatives. Yalnizyan spoke to Maclean’s for a feature in the latest print edition on the end of growth. This is an edited transcript of that interview.

Q: Is it fair to say that in the longer term, what we’re facing is not just a coronavirus-triggered economic crisis—that this crisis sort of highlights and compounds existing economic problems?

A: Yes, it does kind of cleave open the fissures that were already there, though it also opens up brand new ones. It’s like the new class struggle is going to be between people that think that they’re beyond the rules and the people that realize that their wellbeing is a function of other’s wellbeing.

Q: You’re talking about social differences rather than economic?

A: No, social and economic. Have you seen the GIF that was designed by a New Zealand epidemiologist for how Covid is transmitted and how social isolation works?

I explain what level 2 of NZ’s #Covid_19 Alert System is in my latest @TheSpinoffTV piece. In her briefing @jacindaardern listed what we all SHOULD do now. I need you to understand that you MUST do them otherwise we’ll be at level 4 before we know it. https://t.co/xQSJo9coKN pic.twitter.com/rkUazZhao5

That’s exactly how the economy works. I get money and then I share my money, via the things I have to buy, with others. And that multiplies. And when I lose money, there’s this cascade of lost income to the system.

READ: The end of economic growth

I think we are starting to see how health and wellbeing has got a connecting effect. [It’s the same for the economy.] My economic wellbeing is a function of others of economic wellbeing. Whereas for the last 30, 40 years it’s been very self-interest driven, very Darwinian, survival of the fittest. Our responses to economic downturns is bootstraps—get yourself better skills, develop your resiliency, fit right back in. It hasn’t been system driven. But now we’re starting to see much more clearly the way in which economies are interdependent, so that when one part of the economy starts to sag, it has ripple effects. The biblical image is how different parts of the body are still all parts of the body and when something happens to your left hand, you’re going to feel it through the whole body. So this epidemiological model offers a way of understanding that economic interconnectedness as well.

Q: There’s obviously the disruption that this crisis has caused, and it’s going to have devastating short term economic impacts, and longer-term impacts. But does it also perhaps present an opportunity for a reset and for rethinking some assumptions that we’ve made economically?

A: Not only that, for rethinking the architecture of our social security system. Don’t forget in the early to mid 1990s, we went through several rounds of cutting back all of the supports for working-age adults through unemployment insurance, through jobless benefits and through social assistance benefits, and at the same time cutting health services. What did we get in return? Budgetary surpluses. And what did we get for our budgetary surpluses? Tax cuts. So we never have fixed the problems we created in the early 1990s with respect to resilience in the event of a very serious economic downturn.

Q: And this highlights some of that.

A: Oh yeah. And at the federal level, they basically MacGyvered a whole new architecture for social security in six days. And it had elements of what some of us have been talking about for decades—those of us that said, you’re making a huge mistake cutting the way you’re, you’re cutting, you’re going to leave an awful lot of people exposed and those exposed people are going to bring down the house. I have tons of colleagues who’ve been talking about how to fix the system to make it recession-ready.

We talked about it in the wake of the 2008-09 global financial crisis, which for Canada was shockingly brief. The first nine months of that crisis look like the great depression of the 1930s in terms of joblessness. But it was a very sharp, V-shaped recovery because China was the ox that pulled our cart. So we didn’t notice the same fault lines that existed 10 years ago and everything we did in response to that—and we did a lot—was, as Mr. Harper would say, timely targeted and temporary. But now we’re seeing this isn’t something that is timely, temporary, and targeted. This is everywhere and for a long time. It’s going to require cash distributed with speed to an unprecedented number of people. So the Canada Revenue Agency is going to save our bacon. Which is hilarious, right? Because we all hate it.

READ: Could the coronavirus financial crisis lead to another populist storm?

Q: So we have a number of initiatives aimed at helping citizens and businesses to not go into free fall. But what happens down the road? After 2008, 2009 there was an expectation that there would be this V-shaped curve and that growth would go back to pre-2008 levels. And that didn’t happen. So is it even less likely that it will happen this time?

A: So on the other side of this, there’s a couple of unknowables and a couple of knowables. One knowable is that the economy will be more demand-driven than export-growth-driven. So whatever growth is going to happen is going to come from Canadians demand for goods and services, more so than whatever emerging economies are looking for. Exports will return, but they will not be driving growth. It will be driven by demand more than it has for the last 40 years.

Q: And is this because of political reasons or because things are changing on the ground in those emerging markets as well?

A: It’s partly because the emerging economies are also hit by the pandemic. Some emerging economies have got better healthcare systems than the United States, but they have less access to resources. Even though they’re younger, we don’t know whether they’ll get sicker. We don’t know whether they’ll have more deaths of the working-age population. We know that they could be harder hit by the pandemic than even we were. So that’s point number one.

Point number two is what’s been going on in the last few months, courtesy of Donald Trump, has been more production at home, less reliance on exports. The pandemic will double down on that. We don’t know now whether we can rely on our trading partners. So that will boost manufacturing activity at home. One example of technology accelerating that is 3D printers. We always knew that the potential for 3D printing is to relocalize production. You could get your intellectual property from anywhere. You could design something from anywhere, but the actual manufacturer could be at your local library, at your local hardware store . It could be literally in your backyard.

My point is, we are reconfiguring the sources of growth to be more rooted in domestic conditions. It’s not the end of globalization by any stretch, but what we’ve done for the last 40 years may not continue at the same pace going forward. So domestic demand matters. And the number one thing that happens to domestic demand in Canada is that a bigger proportion of the consuming public is old and getting older, and they’re going to move from working age to post working age, which will mean that their incomes will fall, which means they will consume less.

Q: That demographic question of course predated the current crisis.

A: Something big is about to happen in terms of slower growth rates that had nothing to do with the pandemic. That was the organic setting for it. Now post pandemic there will be a bunch of factors that are not predictable: How long this goes, how many businesses it knocks out, how many people are able to come back. That is all a function of policy— and our social behaviours.

And then the final unpredictable element is this experience is teaching us that there is something that I have dubbed—along with “slowth”—the essential economy. When we are told that we may not undertake nonessential travel or trips out of our home, we stop and think what is the essential part? It’s food, it’s shelter for those who don’t have it, medical supplies, healthcare if you need it and making sure you have access to electricity, water and communications, which would be by and large phone and internet. That’s the essential economy. And of course dealing with waste, right? And essential childcare for frontline responders who have nobody to take care of them. That’s the essential economy.

READ: People are risking death so we can stay home. We need to pay this debt.

A: When you break it down, what does it take for an economy to function, for society to function? It’s not a terribly long list. So what part of the essential economy do we take to the other side? How do we pay undervalued workers in grocery stores that you know, deliver our meds to us, to the door, through the postal service and through deliveries? How do we, how do we pay in value these people that are essential to our wellbeing? We know we’ll need more healthcare, more elder care, and more childcare on the other side of this. We know that the caring sector of the essential economy will be more needed. Where do those people come from? Are they paid or unpaid, and paid well or paid poorly?

And every element of what I just said has got a for profit and a not for profit element to it. It has a public and a private element. And it’s that combination, the mix that we choose, that will determine what kind of growth is on the other side of this. And if we choose to have women do more unpaid stuff, that will have an implication too on how the economy grows. Because women are actually a huge part of the essential economy, both paid and unpaid. This recession is completely different from anything else we’ve seen. And one element of it is that it’s a she-session. The role of women in both losing jobs as well as doing jobs and unpaid work has never been more important.