Why did Donald Trump bring up the Chevrolet Impala? 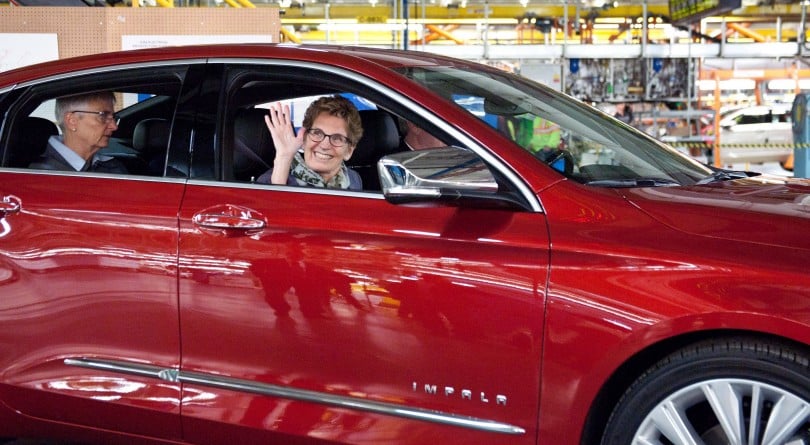 Former Ontario premier Kathleen Wynne in a Chevrolet Impala during a tour of the General Motors Oshawa Assembly Plant in 2014. THE CANADIAN PRESS/Galit Rodan

“Off the record, Canada’s working their ass off. And every time we have a problem with a point, I just put up a picture of a Chevrolet Impala.”

Those were the words President Donald Trump spoke during an off-the-record moment with Bloomberg News reporters, which was leaked to the Toronto Star. The inflammatory remarks suggesting his outright refusal to compromise unleashed shockwaves amid the high-stakes NAFTA negotiations between Canadian and American officials.

But why did Trump bring the Chevrolet Impala into this?

It may, in fact, be an instance of the U.S. president exhibiting at least a partial grasp of facts. This full-size sedan has been one of Chevrolet’s most iconic and best-selling models and a staple of the Canadian automotive manufacturing sector for the last half-century.

General Motors does the final assembly of the Impala at its plant in Oshawa, Ont., where it employs 2,485 unionized workers. The Impala was first assembled here when the car launched in 1958 until it was discontinued 1985. GM brought back the Impala in 1994, but production of the model didn’t return to Oshawa until 2000. The car currently retails for $31,245 and up and continues to be a popular choice for fleet purchases, which make up the majority of Impala sales.

Still, GM’s American executives could not have been thrilled to hear their president tossing the model about like a poker chip.

Because of shared supply chains, large parts of the Canadian-made Impala come from the United States. According to data from the National Highway Traffic Safety Administration, the U.S. federal agency responsible for motor vehicle regulations, 60 per cent of the value of the Impala’s content is either American or Canadian and 21 per cent is Mexican. For the 2.5 L versions of the car, the engine comes from the U.S. The transmission for all versions also comes from the United States, with the exception of the six-speed version, which is made in Mexico.

The number of car models produced at the Oshawa assembly plant, though, has also been on the decline. The Chevrolet Camaro was also built in Oshawa until 2015, when production shifted to Lansing, Mich. Same goes for the Buick Regal which is now built in Germany as of 2017.

Alongside the Impala, General Motors manufactures the Cadillac XTS (which uses the same platform as the Impala) and the GMC Sierra and Chevrolet Silverado pickup trucks.

RELATED: What happens if Donald Trump slaps a 25 per cent tariff on Canadian-made cars?

It’s unknown for how much longer the Impala will be made in Oshawa. General Motors also makes the car in its plant in Detroit. Because of the declining popularity of sedans in favour of SUVs and crossovers, sales have been slumping. In 2017, 75,877 units were sold in the United States, down from 97,006 in 2016 and 116,825 in 2015.

Still, Trump’s jab hit the spot, suggesting he’d done more research on the point than he appears to on other trade irritants, such as softwood lumber or dairy supply management. As for whose benefit he’s putting up pictures of the Impala, though, is an open question: he is not personally participating in negotiations.