Why is David Dodge arguing for deficit spending?

David Dodge lays out the economic case for a new national infrastructure program. 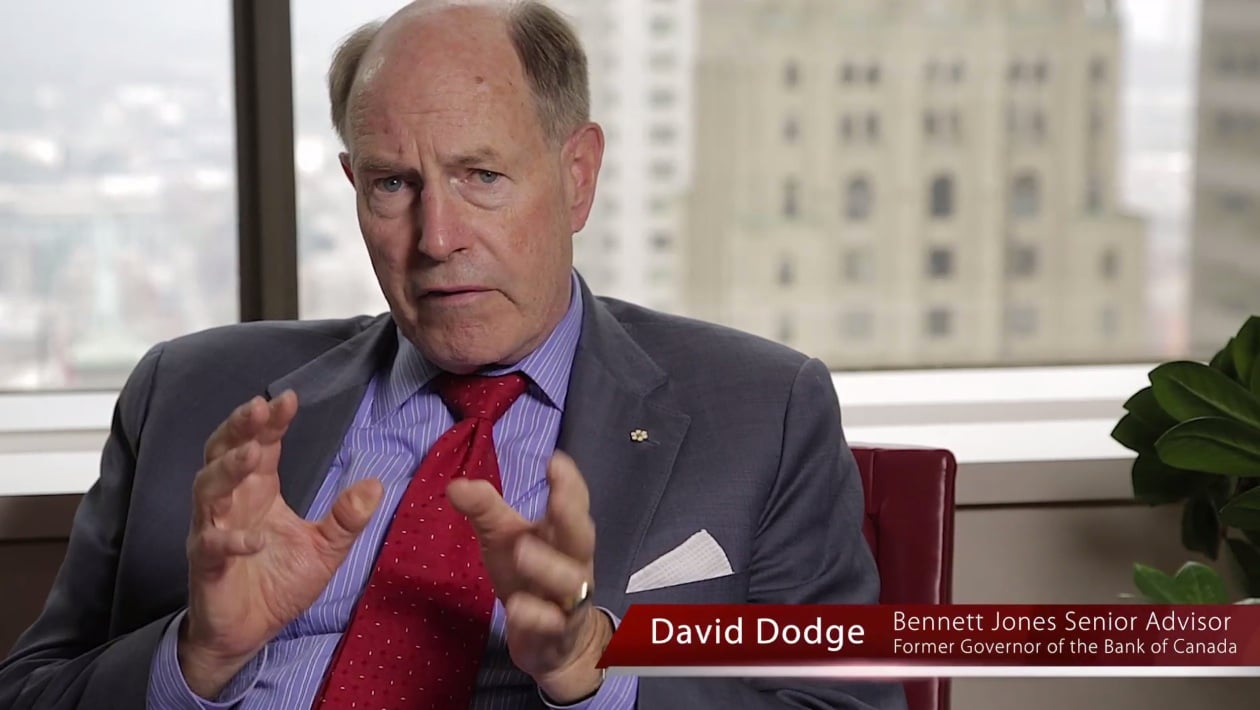 In the 1990s, David Dodge was a senior Finance official steering the federal government budget toward balance during the Paul Martin “Come Hell or High Water” era. The same Mr. Dodge has a new article (written with Richard Dion and John M. Weekes) arguing for slowing down today’s drive to budget balance in order to make room for greater infrastructure spending. What are the economics behind Dodge’s claims? What other challenges might confront more federal infrastructure spending?

Economists typically focus on the debt-to-GDP ratio as the best measure of our ability to pay the national debt. Any ratio increases in size when the numerator on top grows more quickly than the denominator on the bottom. So, in the case of a debt-to-GDP ratio, the ratio will shrink so long as the deficit (the change in the top of the ratio) is smaller than the growth in GDP (the change in the bottom of the ratio). Dodge argues that there is room to take on new debt sustainably since the deficit is a lot lower than annual GDP growth. With this in mind, even a large increase in infrastructure spending could be consistent with an ever-decreasing debt-to-GDP ratio.

Would such investments be productive? Dodge argues that more investment should be undertaken when interest rates are low. According to standard theory, investments are productive when the future flow of benefits generated by the investment are worth more than the initial outlay of cash. With high interest rates, few projects will overcome that hurdle; with lower interest rates more projects become economically viable. That’s as true for the public sector as it is for the private sector.

Some might be concerned that other future needs—like growing health costs or public pension benefits—require us to keep the budget balanced now in order to prepare for those future expenses. Others may argue that the focus on “zero deficit” is more tangible to voters, and therefore “zero deficit” slogans are a necessary concession to political marketing. Those criticisms are sensible to the extent we let politics intrude on an economic argument, but as pure economic math, Dodge’s reasoning is hard to question.

While the economics may be solid, there are several challenges confronting anyone wanting to implement a substantial public infrastructure expansion in Canada. Here are three that come to mind.

First, how do we choose the projects? Given our political history, it is only natural for concern to be raised about partisan interference in large infrastructure expenditure decisions. Any new infrastructure plan needs to begin by installing confidence in Canadians that tax dollars will be invested wisely. It’s also important for a federal program to focus on projects with a credible national or at least cross-provincial span of benefits. If projects are only local in scope, levels of government closer to the action should make tax and spending decisions rather than faraway Ottawa.

Second, how do we control the costs? It’s not hard to recall examples of public sector infrastructure projects that blow through their budgets. In recent years, innovations in project management through public-private partnerships (P3) have made some progress, but any expansion of infrastructure spending needs to be tightly focused on getting the most infrastructure we can for every tax dollar spent.

It is worth noting that Dodge does not argue the case for infrastructure on Keynesian grounds of anti-recessionary stimulus. This should please my colleagues Stephen Gordon and Andrew Leach, who often argue that “costs are not benefits” and that the number of jobs created (the infamous “bucket brigade“) is a poor measure of the benefits of an infrastructure project. It is true that with some continuing slack in the Canadian job market (as argued by my colleague Mike Moffatt), some of the dollars spent on infrastructure will employ new resources. But Keynesian stimulus is not fundamental to Dodge’s analysis—he makes the case for more infrastructure spending without it.

The third challenge for a new infrastructure program is how to account for the spending in a clear and transparent way. With the move to accrual accounting in 2003, major capital expenditures by the federal government are now amortized over decades rather than immediately expensed. However, this distinction between capital and operating expenditures invites much confusion: you can see a full discussion from the C.D. Howe Institute here or simply recall the ongoing controversy about budgetary accounting in Alberta. Some provinces, like British Columbia, already have a capital expenditures budget listed separately on budget documents. Things might be different for the federal government though—especially if they are making contributions to assets owned by other levels of government which might need to be expensed by the feds immediately. For Canadians to know what they’re getting from new infrastructure spending and how it changes the fiscal bottom line, transparent accounting is a must.

Does Canada need a new infrastructure program? Joseph Heath argues that most people would benefit more from a few dollars spent on public infrastructure like transit than they would from the extra private consumption afforded by those same dollars left in their pockets as tax cuts. I imagine some others might quickly take the other side of that argument. For me, I’d need to see the list of projects and associated benefits to make that call—but I’m open to being convinced.

In aggregate, Stephen Gordon has noted here in Maclean’s that public infrastructure has been growing for a decade, so we’re not starting from zero. That said, Dodge’s article presents a convincing argument that lower interest rates mean we should be investing more than we have been, and that there is fiscal room to invest more without endangering Canada’s long-run budget prospects.