Why Ontario's balanced budget is no cause for celebration

Even as big provinces tame their deficits, their debts are piling a huge burden on future generations 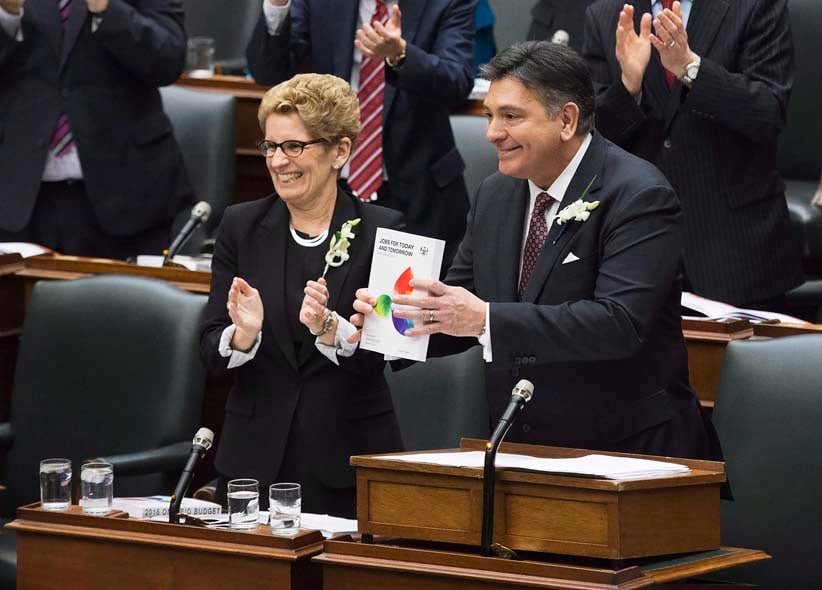 Ontario ended its nine-year deficit streak by tabling a balanced operating budget Thursday, and we can expect applause for what Finance Minister Charles Sousa calls “the start of a new era” of fiscal stability in the province.

The surplus places Ontario among the handful of other provinces, including B.C., Quebec and Nova Scotia (whose Liberal government tabled a balanced budget today, on the eve of an election), who this year have managed to buck the long running deficit trend. But celebrations aren’t in order just yet. Balancing the operating budget—salaries and other day-to-day costs of the running government operations—is one thing. Paying down debt is another, more important thing altogether, and it doesn’t necessarily follow a balanced budget.

In Ontario, for example, the government is still expected to add about $9 billion in new debt this year to finance capital spending on things like long-term infrastructure projects. And according to its own fiscal accountability office (FAO), that trend won’t let up any time soon. By FAO estimates, Ontario’s current $318 billion debt—often cited as the biggest debt of any non-sovereign jurisdiction—will balloon to $370 billion by 2021.

“That’s nothing to celebrate, says Charles Lammam, director of fiscal studies at the Fraser Institute, the conservative think tank. “They’ve built up such a large fiscal problem over the years, balancing the operating budget is just a small step, but the heavy lifting is well ahead of the province of Ontario.”

Ontario isn’t the only one deep in debt. Canadians are becoming more comfortable with personal debt in an age of cheap borrowing and slow economic growth. For many, the worry of bankruptcy is muted by a sense that they can “manage” their debt indefinitely. Provincial governments have similarly adopted a nonchalance around building debt.

That attitude persists in part because provinces have never been barred from borrowing, at least not recently. Taken together, the provinces’ debt-to-GDP ratio—the measure of debt burden relative to the resources available in the economy to sustain that debt—has doubled since 1990, standing now at around 30 per cent. Still, there’s been little change in province’s credit ratings even as they get deeper into the hole.

That’s not to say it can’t happened. In 1993, the S&P lowered Saskatchewan’s credit rating from A+ to BBB+, making it difficult for the province to sell bond issues. The province never defaulted, but was reportedly on the brink of bankruptcy before the federal government stepped in with emergency funds. Newfoundland and Labrador likewise experienced a credit crisis in the early 90’s spurred by their growing debt level, while five provinces received federal government bailouts during the Great Depression.

In a 2012 paper for the Macdonald-Laurier Institute, Marc Joffe predicted that if provinces continued building debt and running what he deemed unsustainable fiscal policies, they too could face government bailouts or default on their bonds within three decades. Alberta, he determined, was most at-risk, with a 84 per cent chance of defaulting within 30 years, followed by Ontario with a 79.3 per cent chance of defaulting in that same period.

“I think that the odds of a provincial debt crisis are much lower than they were when I did that analysis,” says Joffe, who’s the director of policy research at California Policy Centre. “One of the core assumptions in that analysis was that interest rates were going to revert to long-term post-WWII averages. In the five years since that analysis, that hasn’t happened.” Joffe adds that while interest rate will likely rise, at least until the next recession, they won’t reach the rates he projected back in 2012.

Whether or not a provincial credit crisis is likely, Lammam urges there are other reasons Canadians should care about their provinces’ debt. “When governments rack up debt, taxpayers have to pay interest on that,” says Lammam, who calculates that each Canadian pays $1,750 each year to service government debt. “It means the tax dollars we contribute are going to pay interest on government debt, and not to programs that Canadians value, whether it’s health care, education or what have you.”

The irony, of course, is that lowering debt often requires spending cuts that mean services take a hit, anyway. When the federal government cut transfer payments to the provinces in the 90s, provinces responded with austerity measures and by downloading certain responsibilities, many concerning social welfare, to local governments. During the same time, the economy grew and debts stabilized as provinces had funds to pay them off. When the financial crisis interrupted that period of prosperity in 2008, governments responded with stimulus spending.

“There’s a lot of debate about whether that was successful,” says Lammam. “Some of our research shows there was negligible impact on the economy from the stimulus spending.” What is certain is that the recovery strategy has made debt worse without offering practical solutions to reverse the trend. Both Lammam and Joffe agree that governments should make a greater effort to run substantial surpluses during flush times and put those funds towards their capital spending and debt payments. Alberta’s post-oil boom economy is a prime example of provinces’ failure to do that. Nova Scotia, meanwhile, is expected to use this year’s surplus to pick away at its $15.2 billion debt.

Now nearly a decade removed from the last recession, and experts think another is imminent. This time, however, we’re in a much more precarious financial situation. “If we hit another economic road bump and recession happens, there’s some real concerns that we won’t be prepared to deal with those issues,” says Lammam. “And it’s a real possibility.”