The minimum wage hike will cost Kathleen Wynne. But how much? 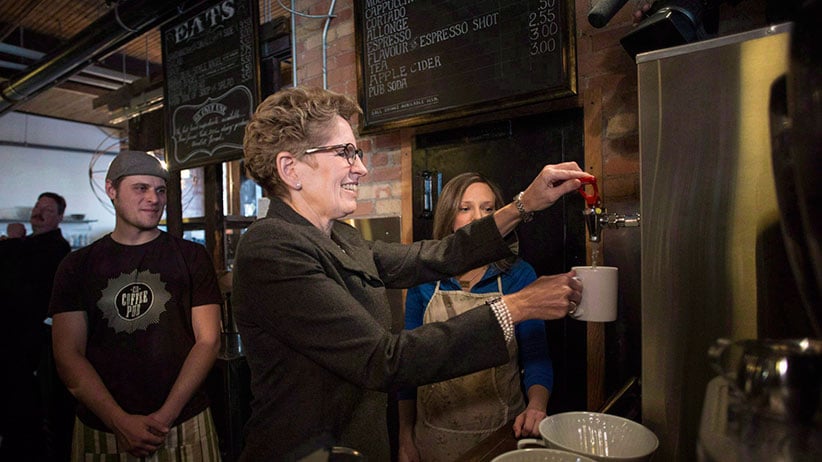 Back in 2014, the Ontario Liberals introduced legislation to tie the minimum wage to inflation. The idea came about after study by an expert panel of labour, business and youth representatives, and it was designed to be both fair to workers and predictable for companies. The government was keen to emphasize that the move would take the politics out of the contentious minimum wage issue.

Three years later, the Liberals put the politics right back in, opting to raise the minimum wage from $11.60 an hour to $14 as of January 2018, and to $15 the following year. The scale and pace of the jump is virtually unprecedented in Canada and the U.S., making the long-term impact tough to gauge. Businesses have warned that wage hikes could result in a decrease in hours for employees, a slowdown in hiring, price increases and job losses. Those complaints are par for the course when a minimum wage increase is proposed, but some actions by businesses appear to have taken the province by surprise. In the wake of revelations that some companies may have violated workplace rules in response to the minimum wage hike, the Ministry of Labour said this week it’s hiring up to 175 new inspectors to investigate complaints and ensure compliance.

The past week has been messy, with accusations that businesses are behaving unethically, but also that the provincial government’s policy is to blame. Still, the policy could prove advantageous for Premier Kathleen Wynne in the upcoming provincial election—even with turmoil in the business community.

Minimum wage remains, for better or worse, a topic freighted with political symbolism—some of which is divorced entirely from economics. “It’s about the issue of state intervention,” says Geneviève Tellier, a professor in political studies at the University of Ottawa. “It’s really a philosophical debate, and economists almost don’t really have a say in terms of what should be done, since it’s often a question of personal preference rather than having hard facts.”

Naturally, that’s something political parties will exploit. In this case, a $15 minimum wage appeals to the progressive element of the Liberal party’s base, as well as that of the NDP. Indeed, wage fairness is a hallmark issue for the left, and the Liberals have positioned themselves front-and-centre, tapping into the angst and anger around income inequality and precarious employment. “The Liberals’ concern is where there are gains to be made, and they think those gains are to be made on the left side of the spectrum,” Tellier says.

The Progressive Conservatives, meanwhile, have been conspicuously quiet on the issue. “It’s popular enough that the Conservatives don’t want to be looking like grinches,” says Henry Jacek, a political science professor at McMaster University. As a result, the PCs have been left to criticize the speed at which Wynne implemented the change. Leader Patrick Brown lambasted the premier’s approach as “careless” and “reckless,” trumpeting concerns from business owners about the dire consequences to their operations. Yet even the business community isn’t necessarily united on the subject. A poll by Campaign Research conducted last year found 47 per cent of small- and medium-sized business owners said a $15 per hour wage is “about the right amount” while another 15 per cent said it was too little.

The fallout and opposition in the business community has actually benefited Wynne so far. News about Tim Hortons franchise owners who eliminated paid breaks and banned tips have dominated headlines for days, leading to calls for a boycott as well as protests Wednesday. The public backlash provides Wynne another opportunity to present herself as a champion and defender of the working class, which, of course, she did with gusto.

The timing works in her favour, too. The Ontario economy is performing well, and the unemployment rate is below the national average at 5.5 per cent. A sudden downturn in the economy or an uptick in the unemployment rate could allow critics to attempt to pin the blame on the minimum wage hike, but with only a few months before election, that’s an unlikely scenario. It will take some time for the effect of a higher minimum wage to show up in employment data, if at all. Says Jacek: “There’s not a lot of time for things to go bad for the Liberals.”

Nevertheless, the unprecedented nature of the increase carries some economic and political risk. “We’re moving into uncharted territory,” says David Green, a professor of economics at the University of British Columbia. “Even the more left wing economists are saying, ‘Whoa, this is a little fast.’” There have been double-digit percentage increases in the minimum wage in the Canada in the past, but typically when a province has fallen behind its peers and needs to catch up. That’s not the case in Ontario. The minimum wage is typically between 40 per cent and 50 per cent of the average wage. The bump to $15 an hour takes Ontario above that threshold, in a province where 30 per cent of workers make less than that wage.

Typically, the restaurant sector relies on low-wage workers and, as a result, is heavily affected by minimum wage increases. Over time, the sector has learned to accommodate these changes. But leaping to a $15 minimum wage will affect a wider range of industries, such as low-end construction work, that are less used to dealing with fluctuations in pay. Business operators, especially inexperienced ones, have a track record of overreacting to minimum-wage changes by slashing hours or even reducing headcount. “Some firms make decisions, like laying off workers, that in the long run they don’t need to do,” Green says. “In industries where firms are not used to this, there’s a chance firms may overreact.”

RELATED: In a fight over minimum wage at Tim Hortons, the worker loses

If that happens and a wave of stories about companies having to let employees go hits the headlines, that would pose a much more difficult scenario for Wynne to navigate than standing up to Tim Hortons. And it would allow the Conservatives the chance to double-down on their charge that the minimum wage increase was hastily implemented.

All that said, with the election five months away, the minimum wage changes may soon be overtaken by other issues. And while it may prove popular, it could still be insufficient to overcome Wynne’s approval rating, which stood at just 17 per cent last fall. “She could do everything right,” Jacek says, “but she may not win the election because people have already made up their minds about her.”