A notorious Canadian party school attempts to sober up 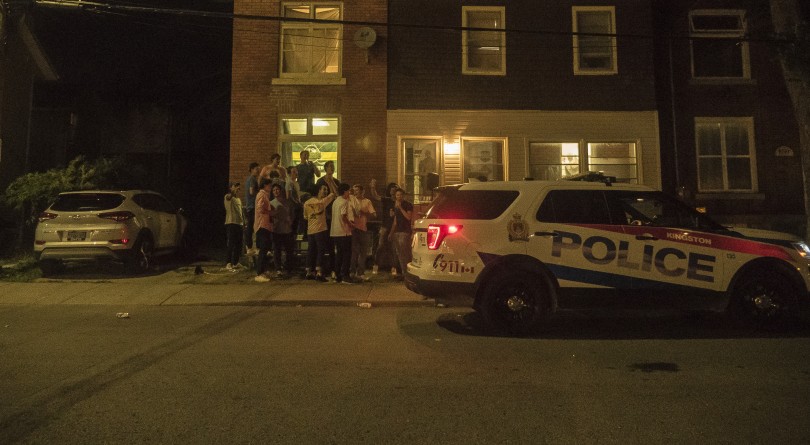 September 21st 2018 — Kingston, Ontario Students are seen being stopped by the local police and if ticketed students are then summoed to the Courts where their name is disclosed to the University. A pilot program named the University District Safety Initiative and rolled out by the City of Kingston, Kingston Police and the Queen’s University aims at curbing public drinking and large street parties in the University district. (Photography By Jalani Morgan)

It’s a balmy yet windy Friday in late September in Kingston, Ont.—deﬁnitely not ideal weather for drinking games, but Andrew and 10 of his friends are filing out onto their front lawn, funnels in hand, nonetheless. The (reasonably priced) canned beer is flowing as 11 third-year Queen’s students carouse (a responsible amount, of course) to Shake It Off, Taylor Swift’s ode to carefree revelry, as it permeates the night air (at a respectful decibel level, of course). And then the cops show up.

“Are we doing anything wrong, officer?” asks one partygoer in a totally wholesome, not-at-all-suspect tone. The ensuing exchange happens at head-spinning speed: A female officer barks at the students to turn down the T-Swift and gives David (a beer-less attendee who admittedly “doesn’t like cops”) ﬁve seconds, complete with countdown, to step off the sidewalk. Five, four, three, two, one. The undergraduates begin arguing. The police SUV hops the curb. The officer collects IDs and returns to her cruiser to deliberate whether she’ll hand out tickets. “Honestly,” says Andrew, “this is a typical Friday.”

A police presence on a weekend in the Queen’s University District—or any university district for that matter—isn’t exactly shocking. But students say something’s different this year: the fun’s over. In fact, due to escalating concerns—expressed by school administrators, city and police officials, and the area’s long-suffering neighbours—about the district’s history of sprawling, unsanctioned street parties, the rules have changed. In March, Kingston City Council green-lit the Nuisance Party Bylaw, which allows police to disperse large, out-of-control parties, like the infamous homecoming gatherings on Aberdeen Street. Moreover, they can slap rabble-rousing partygoers with fines starting at $500 for behaviours ranging from public intoxication to fighting to public urination. Such bylaws are old news in other university towns, like Guelph and London, Ont., but—just in time for the fall 2018 term—Queen’s is doubling down with an extra, first-of-its-kind deterrent: under the new University District Safety Initiative (UDSI) enacted in June, residents (and out-of-towners) ticketed under the nuisance bylaw are no longer allowed to pay their fines online, hungover, from the comfort of their twin bed. Instead, they will be required to appear, in person, before a justice of the peace in a Kingston courthouse. In addition, Queen’s students identified on the public docket by the university could find themselves charged under its student code of conduct, potentially resulting in a loss of privileges—academic, athletic or otherwise.

If these measures seem extreme, Kingston Mayor Bryan Paterson (a Queen’s alumnus), suggests they have been a long time coming. “It’s fair to say that large, unsanctioned street parties have been a difficult issue for the university and the city to grapple with for many, many years,” he explains. One need look no further than the “student ghetto” homecoming celebration in 2005, which saw a proud alumni tradition morph into what can only be described as a Dionysian riot. Five thousand revellers spilled onto Aberdeen Street, pelting police—outnumbered 50 to one—with beer bottles, and engaged in acts of rampant vandalism, including flipping a car and setting it ablaze. Overtures to the community were made in the aftermath: homecoming was cancelled from 2008 to 2013, and the university’s Alma Mater Society attempted to entice partiers away from Aberdeen’s boozy clutches—with food, drink and a Serena Ryder concert—to the much tamer ReUnion Street Festival, thrown in time for its annual alumni weekend. In 2017, Queen’s invested in more on-campus alcohol education, joining the Canadian Post-Secondary Education Partnership—Alcohol Harms and hosting events like “Rethink the Drink,” a panel discussion on the ills of binge drinking and party culture.

One might have thought Queen’s had done enough to lose its Animal House reputation for good, but St. Patrick’s Day 2018 proved otherwise. Queen’s principal, vice-chancellor and alumnus Daniel Woolf says the Irish holiday has crept up to Aberdeen levels of debauchery in recent years and now rivals move-in weekend, frosh and orientation weeks, and homecoming. “Suddenly, it was just there,” he says, referring to the 5,000-strong crowd of partiers that flooded the University District in March. “This one concerns me more: an all-day drinking fest, starting early in the morning.” Indeed, in addition to some relatively tame drunken displays—a man narrowly escaping electrocution after scaling a hydro pole and students passing a stolen boat across a teeming mob—a garage roof holding 40 people collapsed, somehow without causing any injuries. “By the grace of God, nobody was killed,” says Woolf. Fed up with students blocking ambulances, harassing paramedics and hogging beds at Kingston General, Woolf called the mayor, and a new initiative was born.

MORE: What a wild weekend is like at St. FX, Canada’s top party school

Paterson—who is up for re-election in October—says that during Kingston’s quieter summer months, police were encouraged to give new and returning students “lots of warnings” about the newer, stricter regulations that awaited them come move-in weekend. In late September, he also met with representatives from Queen’s student government to solicit feedback, reminding them the UDSI was “just a pilot project” and could always be augmented in the future. In a statement, Munro Watters, the Alma Mater Society’s vice-president of university affairs, said that since the body had “not been involved in the ideation and implementation of this policy, [we] don’t have any information on the intent,” but that the society will be soliciting student sentiments on the safety initiative until it’s up for review in April 2019.

Other students, like Andrew of William Street, have opinions now, and they’re not nearly as diplomatic as those of his campus representatives. “In my opinion, it’s just excessive,” he says, cradling his can of beer in the middle of the road. “If people are falling off a roof, I get it, but I feel like the cops don’t want to be doing this minor [patrolling]—it’s a waste of their time and ours. Plus, we’ve had parties where we were kicked off our friends’ properties for playing drinking games on the porch. That’s our right!” Across the way, his housemate, Jason—a geography major—phrases it more succinctly: “F–k me, I guess, for being 20 years old and singing to Jack and Diane on a picnic table.”

Woolf categorically disagrees with student claims that the UDSI is heavy-handed. “Let’s be realistic: we’re not talking about [using] water cannons,” he says. “Nobody’s saying, ‘Don’t have fun’—not the mayor, and not me. There’s a line between safe and responsible [partying] and doing things that are unsafe, discourteous and disrespectful. To those students who are worried that this [measure] is going to be inconvenient, it’s very simple: don’t get yourself summonsed.”

Other undergrads, like Anna—a fourth-year biology student and varsity athlete—have more misgivings about the UDSI’s academic consequences than, say, lowering the volume on John Cougar Mellencamp. “I think the idea is right, but the way they’re going about it has a lot of flaws,” she says, sipping water at the on-campus pub. “I know someone who got their court date and it’s in early December. Now they have the problem of missing time to study for exams, or time they should be in class. It’s also not nothing to have your name on a docket; it’s not nothing to have your academic standing or athletic eligibility be called into question for making a small mistake, when, in the past, you could move on from it. Is this really in our best interest?”

Hearing complaints about the UDSI’s misconduct rules, Woolf is, again, unmoved: “We don’t see this as double jeopardy; we see the students as part of two communities. We wish to educate them in responsible drinking and, I would say, responsible fun.”

Later in the evening, across from Stooley’s Bar & Grill (a known student hangover haunt), still more dwellers of the University District have dragged their sturdiest flip cup tables out onto their front lawn. (The wind, mercifully, has vanished.) A strobe light flickers red and blue, one shade shy of Queen’s trademark tricolour. Kanye West can be heard rapping something about loving “hoes” as two unimpressed female students give the tournament’s participants a disgusted once-over and continue walking. Jeremy, a fourth-year student on his third house, seems unfazed at the prospect of his bungalow being raided by cops. “We don’t want more people going to hospital, and for the few days that we get really out of control, it’s good to have extra security.” He pauses. “But people aren’t going to stop drinking.”

Per a media release issued Sept. 4 by Kingston Police, 115 charges were laid under the UDSI during its first official weekend, the vast majority of which were for open liquor. And according to an official in Queen’s media office, the police have optimistically indicated—anecdotally, at least—that this marks “a drop.” But Jeremy says the students may have already schooled them: “Last week, there was a huge party on Aberdeen,” he reveals. “Just like during HoCo [homecoming], the streets were ﬂooded.” The cops warned them of the coming crackdown, he said, so the students simply moved their neighbourhood parties to a less controversial weekend. Returning to, presumably, flip more cups, he passes a row of beer bottles strewn on the grass, just shy of the sidewalk.