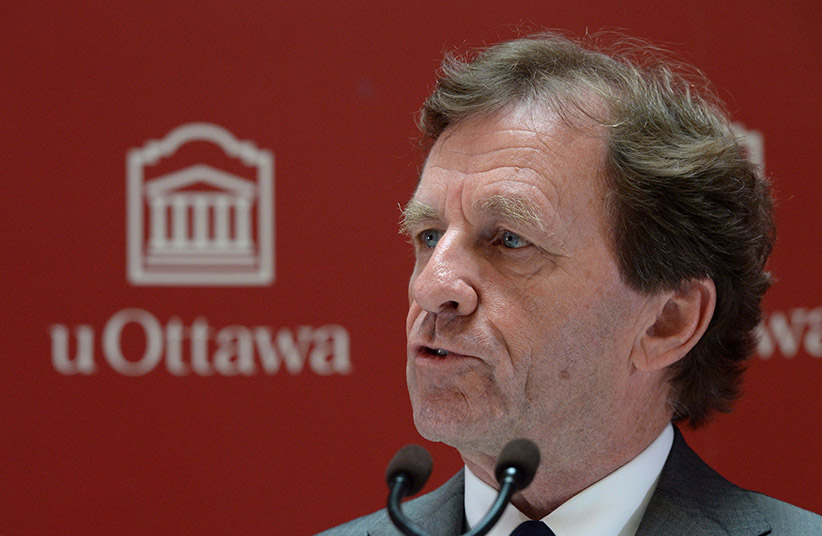 After Allan Rock became president of the University of Ottawa in 2008, he noticed the counter jobs—the employees who helped students with admissions and other bureaucratic tasks —were the lowest paid and the least desirable. “And if you showed any promise, you were [promoted] right to the back office,” he said, adding that it made for a miserable student experience. Not anymore. “We flipped that around now and we made the counter the preferred position. It pays more [and] you get special training. That’s the way it should be.”

When it comes to promoting the importance of research and innovation, Rock is similarly flipping the script. As he tours Toronto this week, including a talk at the Economic Club of Canada, Rock’s message has the ring of the research-intensive bent promoted by new UBC president Arvind Gupta. In an interview with Maclean’s, Rock stressed the importance of forging partnerships between the private sector and the university, in which students can collaborate with industry professionals on campus on real-time business problems.

Pointing to an Association of Universities and Colleges of Canada (AUCC) conference that referenced the innovative economies of Israel and Germany, “one of the lessons they gave us was, ‘Relax. Bring [private sector] onto the campus. They’re not going to deny your academic freedom. They’re not going to establish your priorities for the university,’ ” Rock said. “Those partnerships will lead to an increased pace of commercialization.”

In his former role as Canada’s minister of industry, “I was learning about how you stimulate economic growth through competition, productivity, innovation,” Rock says. “It all came back to research.” Research benefits students in the classroom, too, because the best teachers are those fresh out of the labs with the most up-to-date studies.

And yet Canada isn’t keeping up with other countries in terms of research and development investment. The nation ranks near the bottom of the Organisation for Economic Co-operation and Development (OECD)’s list of business spending on R&D, Rock points out, currently less than one per cent of GDP.

And while he focuses on research, not to mention maintaining steady funding from the provincial government, he also wants to raise the profile of the University of Ottawa in the Greater Toronto Area. With the number of people in the coveted 18-to-21 demographic projected to decline by 10 per cent between 2011 and 2020, according to Statistics Canada, Rock says the Ottawa school will be shopping for students. “We also have relatively modest penetration in the Toronto market, where there is going to be growth.”