Are private training companies like Juno College an alternative to a computer science degree? 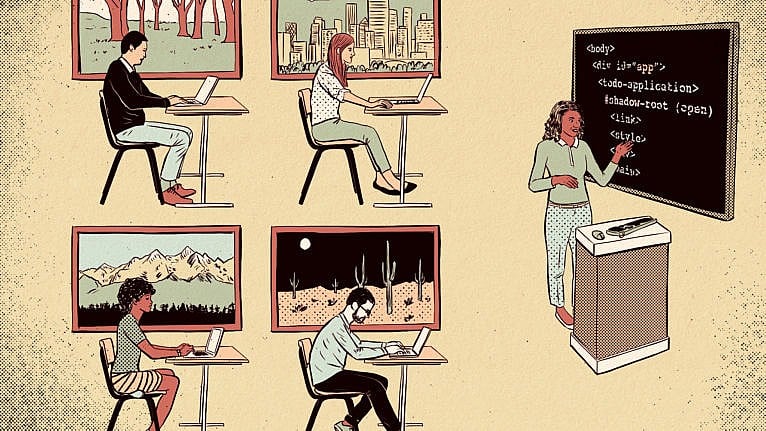 Anna Liang was 12 when she began exploring computer programming. “I was pretty much coding without realizing it,” says Liang, who taught herself the basics of HTML and CSS programming languages while designing her own virtual world inside the online game Neopets—an heirloom of the early internet days. “I’d create designs on Photoshop and then bring the graphics and layouts to life through code.”

But her love for programming came to a standstill in Grade 11 computer science. “There were two girls in the class,” she says. “It felt like the lesson was created for someone else.” By the time she reached university, Liang decided to go a different route, delving into focusing on business and social sciences. But after graduating with a sociology degree from York University in Toronto and then working in a small law firm, she felt no closer to a career that she was passionate about. “I’m a very creative person—it just wasn’t doing it for me,” she says. In February of last year, Liang enrolled in a web development bootcamp at Juno College. Five months later, she landed her first job as a front-end web developer.

Recent university graduates like Liang are turning to bootcamps to grow their skills in some of the most in-demand areas of tech, and to do it fast. Private training companies such as Vancouver-based Lighthouse Labs offer bootcamps to people with no previous experience or education in IT or computer science, and graduates have been very successful when it comes to finding work in their new fields, be it coding, UX (user experience), data analytics or cybersecurity. Lighthouse Labs boasts a job placement rate of 95 per cent within 180 days of graduation, while General Assembly in Toronto reported a 91.4 per cent in-field placement for graduates of its full-time program in 2018-19. Not to mention, bootcamp graduates in North America experience an average salary lift of 59 per cent, according to Course Report, an online hub for information on bootcamps in North America. The average starting salary for grads, it says, is US$69,079.

Students have been flocking to bootcamps at a steady rate since around 2012. In Canada, the programs graduated 1,057 students in 2019 and brought in $12,056,406 in revenue, according to Course Report. On average, a full-time program costs about $12,000 and runs anywhere from four to 12 weeks. Prospective students have to apply, but it’s open enrolment—if you pay, you can attend.

In the early days, the question was raised as to whether bootcamps fell under the purview of post-secondary regulators like the Ministry of Colleges and Universities (MCU) in Ontario, where the Private Career Colleges Act governs private vocational training. “Before a private institution can offer vocational training to a paying student, it must register as a private career college under the act,” says MCU’s Tanya Blazina. “Registration and program approval ensure accountability and quality and protect a student’s investment of time and money.” However, programs shorter than 40 hours or those that cost less than $2,000 are exempt from the requirements of the act, and many bootcamps have received such exemptions. Some companies, such as Juno and Lighthouse Labs, have nevertheless chosen to register with the ministry. “It’s important that students feel supported and protected by a body outside of any school so they have somewhere to go to in case they feel unfairly treated,” says Jeremy Shaki, CEO of Lighthouse Labs, which has a location in Toronto. There is the added benefit, he points out, that a school’s registration with the relevant ministry allows students to access student loans.

With their emphasis on accelerated learning, and having migrated entirely online during the pandemic, bootcamps would seem to have plenty in common with MOOCs—massive open online courses—available from university extension programs like HarvardX or Coursera. In addition to offering courses in everything from digital marketing to creative writing, MOOCs offer tech-focused training in fields like data science and web development. They’re also free. So it’s reasonable to ask why bootcamps and their hefty price tags should be the preferred option.

Indeed, Ben Walters, a former student at Vancouver-based BrainStation, says you might be better off with a DIY model. “Bootcamps are only valuable to help hold ourselves accountable,” he says. “For anyone with the motivation and a desire to learn, they’re just more money spent.” But other students argue that the structure bootcamps offer, including deadlines and interactive student communities, is worth the money. Liang initially began revisiting her passion for coding through MOOCs, with free online courses and countless YouTube tutorials. And it did help a little. “But you don’t have classmates you can bounce ideas off of,” she says. “You don’t really have that accountability. You have to set it all up yourself.”

Bootcamp courses include live lectures, code-alongs and real-world projects such as app building or web interface design. Completed work can be converted into tangible material for students’ portfolios when they apply for jobs. “It’s being able to go to your hiring managers and show [them], ‘I actually rolled up my sleeves and did the projects and here is a sample of the work I have done,’ ” says Kirk Werner, vice-president of content at Udacity, a provider of “nanodegree” bootcamps with program offerings ranging from autonomous systems to cybersecurity to cloud computing.

The programs also offer career prep and resumé building. And then there’s the networking that comes with being part of a bootcamp community. “People will post jobs almost every day on Slack. And they might say, ‘Oh, I know they’re hiring grads from Juno, I can connect you,’ ” says Liang.

In fact, many bootcamp providers have partnerships with major employers like IBM and Telus. These connections can include everything from the bootcamps offering corporate training for the companies’ employees to the companies participating in career development events and even designing course content. Udacity’s programs are co-created by software engineers and developers from Google and AWS. “You’re incentivized to take this class because you’re thinking, ‘Okay, this is the quality of knowledge Google wants you to have and be able to apply,’” says Jasmine Lawrence, a Udacity graduate.

Some major employers are creating distinct pathways for candidates with bootcamp credentials. IBM has championed what it calls the “new collar” career movement. “These are employees from diverse backgrounds who didn’t necessarily get to the ‘important and well-paying’ jobs with the usual credentials and pathways,” says Jennifer Roynon, IBM Canada’s corporate social responsibility lead. “Almost half of IBM’s North American job openings do not require a four-year degree, and participants in the ‘new collar’ programs account for around 15 per cent of IBM’s total U.S. hiring,” she says.

In general, employer attitudes toward online and accelerated education have undergone a notable shift. “If you go back and look at some of the surveys that were done, I don’t know, 20 years ago, where they would ask employers [their] view of an online degree, or even online coursework, the opinion was very negative,” says Brett Caraway, associate professor at the University of Toronto’s Institute of Communication, Culture, Information and Technology. “Over the last 20 years, the rate of technological change has advanced exponentially and changed that.”

In addition to bridging connectivity gaps in online education with tools like virtual classrooms and digital whiteboarding, technology has itself increased demand for rapid upskilling. “What you have to do in today’s labour market, whether you like it or not, is continuously update your skill set,” says Caraway. “In order to do that flexibly and quickly, you need certification systems with lots of flexibility, which is what online programs offer.”

Still, even after landing their dream job, some bootcamp grads find their colleagues questioning their credentials. “I know people at work who look at me and say, ‘I don’t know how you’re doing this job without a computer science degree,’ ” says Matt Zaitley, who worked as a news writer and producer at CBC for five years before completing a bootcamp in front-end web development. Today, Zaitley is a senior engineer at the San Francisco-based company Scribd.

Some employers also have reservations. “I need people with a master’s or Ph.D. to work in AI,” says Marie-Eve Drouin, talent acquisition manager at Coveo, a Quebec-based software company. “I’ve never encountered someone with a bootcamp certification that could create or work on these algorithms.”

Beyond their authority to confer degrees, universities see themselves as providers of a well-rounded, formative learning experience. “The mandate of a university is much greater than just teaching jobs skills. Its role is to produce critical thinkers, to give you options to decide what you want and grow. They have to hold the line on that,” says Tracey Bowen, experiential education specialist at the University of Toronto’s Institute of Communication, Culture, Information and Technology.

But bootcamps and universities need not be seen as competitors. Udacity’s Werner says his school’s programs tend to serve people who have been in the workforce for some years and want to gain skills in a specific area. Universities, he says, “are serving those who are still exploring what they want to do and finding themselves, and giving them broader experiences in multiple topics.” Some traditional institutions, though, are starting to get in on the bootcamp bandwagon. The University of Toronto School of Continuing Studies, Concordia, Carleton and Mohawk College, to name a few, have recently launched part-time coding bootcamps. Ranging from 14 to 24 weeks, the programs teach programming languages and computer science basics through market-driven coursework.

Periklis Andritsos, professor at the University of Toronto’s iSchool (Faculty of Information), says bootcamps can teach traditional education providers a thing or two about optimizing online education and leveraging data to continuously upgrade students’ learning experience and job readiness. “What bootcamps are doing is gathering data to constantly improve their programming,” he says. “This is an area that universities can still catch up in.”

“We are not trying to replace universities,” says Shaki. “There is a reason those long-term educational experiences give you a chance to discover who you are, build connections, know your opportunities. Our goal is to support that with continuous learning, getting you flexibility within your job, and growth.”

This article appears in print in the July 2021 issue of Maclean’s magazine with the headline, “A techie is born.” Subscribe to the monthly print magazine here.