University of Windsor: I came here for an argument

A new Ph.D. aims to prove that arguing isn’t about bullheadedness. Instead, it can bring people together. 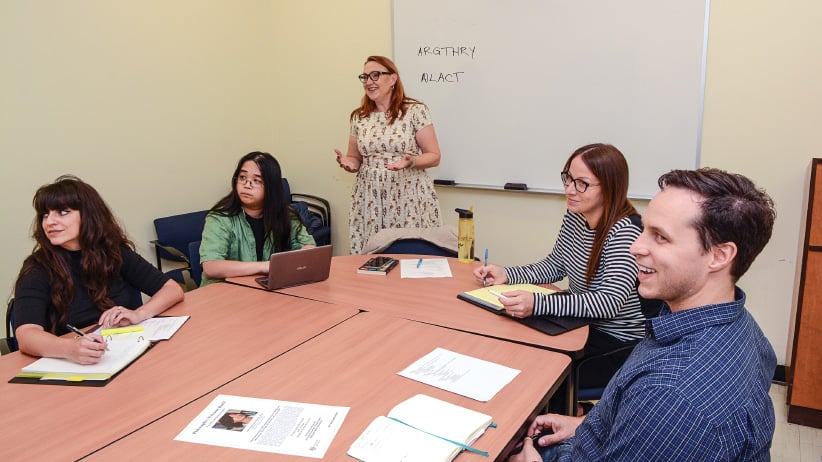 At the University of Windsor, you can now get a Ph.D. in argumentation.

That might sound like the ultimate weapon for future Twitter fights, but it’s not quite the intention of the course. The first cohort of students began the program this fall, and their work is decidedly broader than becoming credentialed experts in squabbling. “When we talk about argumentation, we are not talking about verbal fighting. We are talking about working through disagreements verbally, using persuasion—most importantly, using reason,” says Catherine Hundleby, the program’s graduate coordinator.

Argumentation studies draws from a variety of other disciplines, notably philosophy and rhetoric, and can be applied to any area where there might be conflict over what is—and isn’t—true. The University of Windsor’s Ph.D. program is the first in North America dedicated specifically to argumentation, and the school’s Centre for Research in Reasoning, Argumentation and Rhetoric (CRRAR) is an interdisciplinary hub for argumentation theory and practice.

CRRAR director Christopher Tindale says argumentation is often understood narrowly as diatribe, but it also provides the tools for analyzing polarizing ideas objectively. His current research focuses on defining and analyzing extremism, and understanding what needs to happen for argumentation to successfully change people’s positions, especially in difficult cases of disagreement.

“You get a different reaction [to argumentation studies] now that Donald Trump is in the White House,” he says, noting that Trump’s style stands in stark contrast to his predecessor’s. “Barack Obama was an excellent argumentation practitioner . . . You can use his speeches to teach a range of things in argumentation to students, and they can appreciate the theoretical application of ideas in his speeches.”

Observing how ideas can be communicated is important at a time when some complain the quality of public discourse is hopeless and talk about politics being “post-truth” or “post-reason.” Argumentation can help define what’s at stake when people disagree and set principles for how to work toward solutions, in everything from personal conflicts to governmental policy negotiations.

The University of Windsor has long been at the centre of the philosophical movement of informal logic, which analyzes how people argue and reason in real-world situations. The informal logic school contrasts with other forms of philosophical reasoning, which can be almost mathematical in their approaches. Faculty members at the school were pioneers in conceptualizing the informal logic movement, and the first symposium on the subject was held in Windsor in the late 1970s.

That laid the foundation for thinking about argumentation in academia in a way that wasn’t cut off from people’s everyday reasoning. Today, as a comparatively young branch of philosophy, scholars are still setting the agenda and exploring the ways argumentation can be applied to a huge range of ideas and problems. More recently, the intersection between argumentation studies and computer science is facilitating mass analysis of arguments in a bid to identify patterns in reasoning and logical fallacies.

“Informal logic makes us look at how people really talk, and not only be careful about the truth of our premises . . . but also recognize that, a lot of the time, our conclusions are not necessarily true if the premises are true. They’re often probably or possibly true,” Hundleby says.

Argumentation predictably plays a key role in law and public policy; it allows us to test evidence in court or analyze rhetoric in a political campaign. But the field of study also includes models that aim to resolve disputes. Overall, the goal of argument is less about winning and more about learning about different points of view, finding points of commonality and moving forward in a negotiation process.

Ultimately, Hundleby says, a better understanding of argumentation is crucial to holding people accountable. “Democracy depends on the public having a high quality of reasoning,” she says. “If we don’t have good practices of argumentation—if we fall back on name-calling or yelling or we make up data—if we allow those kinds of bad argumentation practices to persist, the people who have the most political power now can only cement their power.”