Athletic students find a home away from home 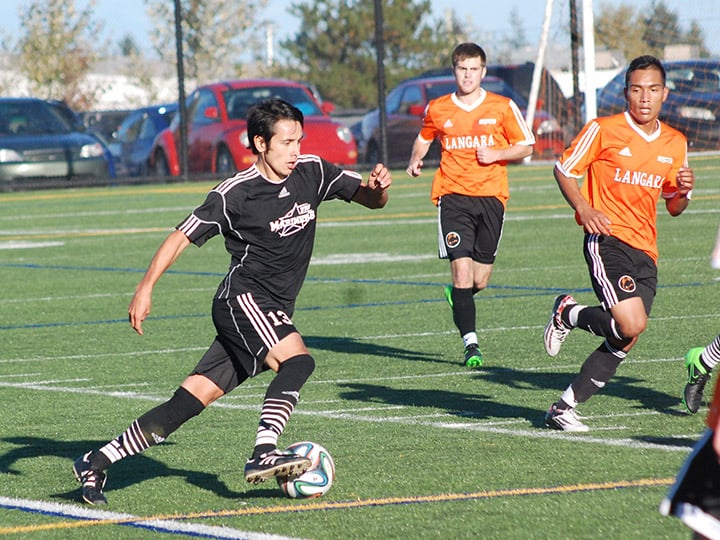 On the pitch: First Nations in the area are a hotbed for sports, VIU athletic director notes (Brent Dunlop)

There are two things you need to know about Vancouver Island University, which overlooks Nanaimo and the Georgia Strait: not only do 1,500 Indigenous students attend classes there, Indigenous athletes have also long had a strong presence on the VIU intramural teams. “There are a lot of First Nations in our catchment area, and many of them are hotbeds of basketball and soccer. We often scout their tournaments,” says athletic director Bruce Hunter. Indigenous athletes tend to be polite, quiet, bordering on shy, Hunter says. But they are aggressive, competitive athletes. “Some of the best players throughout our teams’ histories have been Aboriginal.”

Nine Indigenous students play on VIU basketball, volleyball and soccer teams this year, including Mateo Kostering. He’s wanted to play collegiate soccer “likely since I started walking,” he says. He and his father Doug used to kick the soccer ball around in their backyard on the Namgis First Nation. Today, the 24-year-old fourth-year physical education student is a midfield centre for the VIU Mariners, the men’s soccer team.

Key to this is the Aboriginal University Bridging Program, a one-year prep course that combines prerequisites, tutoring, support and life-skills training to help Indigenous students transfer into various programs, including physical education, providing the student meets entry requirements. Bridging Aboriginal students into university-level courses was identified as a need in 2001. Two Indigenous athletes are in the bridging program this year, in addition to 24 Indigenous students from other vocations.

Kostering is from the tiny village of Alert Bay—a four-hour drive north of Nanaimo. Forget the archetype of lacrosse—soccer is huge on Namgis, as on many other First Nations, likely introduced by Indigenous kids who were taught in church-run residential schools and then brought it home. Alert Bay hosts open tournaments, where Indigenous and non-Indigenous teams compete, in addition to a range of other game levels. Growing up, Kostering’s hero was Matt Mehrassa, who played with the Baha’i Twin Arrows. Mehrassa was also a member of the VIU men’s team, and later played in the 2012 CCAA national championship.

“He was an incredible soccer player to watch—just really talented. He set an example I wanted to follow,” says Kostering, who began to yearn for more. “I wasn’t happy when I wasn’t playing . . . and soccer is the only thing that brought that out in me.” So he headed to university in 2012.

When he got there, he struggled with isolation, missing his close-knit family and culture. College staff referred him to the bridging program, where he received help with academics and managing college life and learned to maintain VIU’s athletic academic standard. (He failed two classes in his first year but later made them up.) “It was tough for me to reach out for that, but I did,” he says. “The [staff] really made a difference and helped me through that lonely period. I never forgot that.”

After university, Kostering wants to return to Namgis and work with children at the local recreation centre. “All it took for me to succeed was for one person to give me that opportunity when I was younger, and I want to be that person in another kid’s life.”