Bioinformatics at the University of Calgary: The healthy crunch of data

In the University of Calgary’s bioinformatics program, students combine health and computer sciences 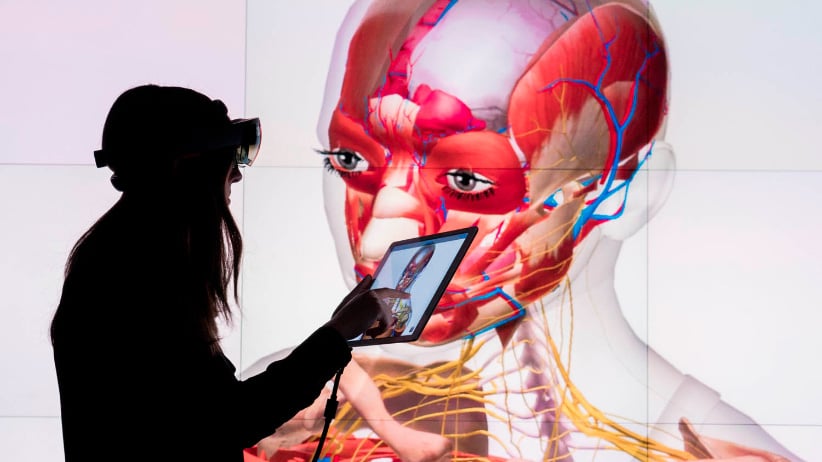 Student Nicole Ewert uses VR glasses and iPad in the The Visualization Studio. The display’s 34.5 million pixels allow for insight and overview that is impossible to achieve with a desktop monitor or standard projector. (Photograph by Chris Bolin)

As a successful student in high school with an afﬁnity for science and math, Nicole Ewert was torn between studying health and computer sciences in university. When she came across the bioinformatics program at the University of Calgary, it occurred to her that she didn’t have to choose. “Those two things seem quite separate,” says Ewert, now in her fourth year in the program, “but together, they can really be powerful.”

Bioinformatics is where biology and computer science collide. Or, as program director Christian Jacob puts it: “It’s the application of computer science to biological science.” U of C is one of few schools to offer an undergraduate degree in the subject. The inquiry-based, research-heavy program is unlike most bachelor degrees in Canada. After two years of general biology and computer science courses, the class size is typically whittled down to fewer than 12 students. The work is rigorous and hands-on, and by graduation, students have a solid theoretical and applied grasp of the program’s two foundational subjects.

Bioinformatics is by no means a new ﬁeld (U of C’s program is some 30 years old), but it’s one that’s gained relevance at an exponential clip in recent years. That acceleration started in the early 2000s with the advent of the human genome project, which sought to map our DNA. When it came time to read the billions of data points from the project and translate them into useful information for the health science industry, experts in bioinformatics proved invaluable.

Jacob notes that—genome project aside—the availability of data in general has been a boon for his ﬁeld. “We walk around with portable computers collecting data,” he says. “You can take that information from your daily life—ﬁtness data, health data—and combine it with your genetic information to understand how your body functions down to the genetic level.”

And that’s just one small aspect of the subject. Another major objective is ﬁguring out how to display information for the folks who then interpret it. It’s a question U of C students answered using virtual display technology. In the summer before her third year, for instance, Ewert worked in Jacob’s lab building a virtual body gallery. “It’s sort of like a video game,” she explains. “We brought in a bunch of models of human anatomy—the organs, the skeleton, the circulatory system—and displayed them in a virtual gallery that you can walk through [using a VR headset] and look at all the body systems and how they ﬁt together.”

The splashy immersive experience isn’t just to show off; it has practical—and potentially game-changing—implications for the medical and pharmaceutical industries. During the drug design process, for example, you can create a simulation to see how a new medication will function in the body. The approach will garner safer, more precise drugs, and it’s a cheaper design process, too. Scientists can run a large number of virtual experiments before bringing their concept to a chemical lab, where testing is expensive and time-consuming. “It’s similar to how we build cars these days,” says Jacob. “We still have to build them at some point, of course, but cars are crashed against walls in the computer before they’re actually built.” Similar concepts can be used for training medical students or helping surgeons prepare for a complicated procedure.

The health industry is just now starting to apply these techniques to R&D and training. Jacob predicts they’ll be pervasive within the next ﬁve or so years. By then, Ewert expects to be wrapping up graduate studies in bioinformatics or working for a biotech company. “That’s what we’re telling our students,” Jacob says. “We’re training them for the future.”