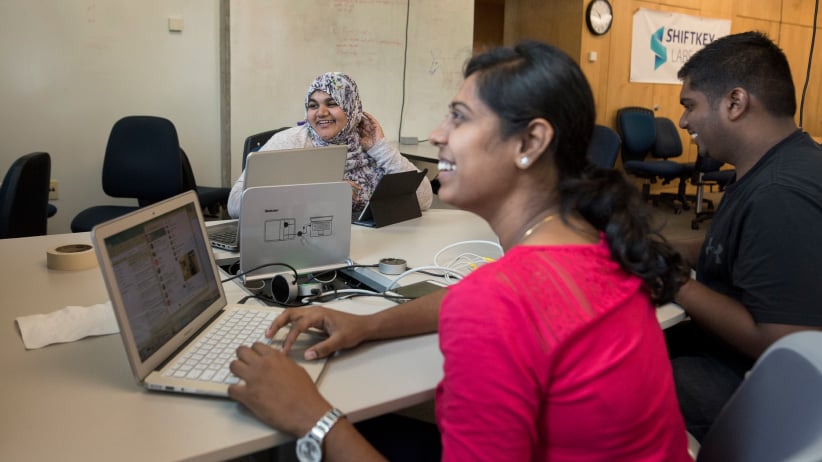 RovBOT co-founders, from left to right, Ruhi Madiwale, Dhivya Jayaraman, and JeyaBalaji Samuthiravelu work in the Shiftkey labs at Dalhousie University where they share the space with other companies. (Photograph, Darren Calabrese)

Imagine you’re Ruhi Madiwale, a young Indian who’s been accepted to a prestigious Canadian post-secondary institution—say, Dalhousie University. Before you can head to Halifax for frosh week, there’s one crucial piece of paper you need to acquire: a student visa. The cut-off time for receiving applications at the local immigration processing centre is 4 p.m., but you have a question about how to complete one of the forms. A student advisor at Dalhousie might be able to help you, but it’s 6:30 a.m. in Canada. “My deadlines were over even before the day started [in Canada],” says Madiwale. “[And with visas], one single mistake in your documents and you end up being rejected.”

Advisers at the university spend as much as three-quarters of their time tackling visa-related questions, according to Madiwale. So she teamed up with two other computer science students at Dalhousie to build RovBOT, an artiﬁcial intelligence platform to provide answers to applicants’ most common questions about the immigration process.

The legal profession is a popular focus for technology start-ups, particularly AI ventures. Some are working to automate repetitive, mundane tasks like tracking changes in the law for law ﬁrms, while others seek to provide services to individuals and businesses that typically cannot afford legal representation. Immigration is an area in particular need of automation to make it faster and cheaper, says Hersh Perlis, director of Ryerson University’s Legal Innovation Zone, “because the [target market] doesn’t often have the type of funds that a large corporation does, and sometimes speed is of the essence.”

RovBOT’s Madiwale, and co-founders Dhivya Jayaraman and JeyaBalaji Samuthiravelu, are international students who struggled to navigate the visa process. The timelines and documentation required vary from country to country, and from candidate to candidate. The processing time in Bangladesh, for example, is currently three weeks, while in India—one country over—it takes twice as long. Madiwale had to provide ﬁnancial statements from her father to support her application, while her co-founder, a working professional before coming to Canada, had to send in her own income tax forms.

While these details are typically posted on the Citizenship and Immigration Canada (CIC) website, the complexity of the process—and the high cost of a mistake—leads lots of applicants to seek human help. In the case of students, that means reaching out to student advisors, who often get the same question posed multiple times in slightly different ways as application deadlines loom. RovBOT, which began development at a boot camp organized by Nova Scotia’s Department of Labour and Advanced Education, can comb through everything the CIC publishes and generate appropriate responses to applicants’ questions. The team is starting with information for the two most common countries of origin for international students, India and China. Their target clients are universities, which could integrate the product into their Facebook pages or websites. While the AI platform is not currently live, the team is seeking lawyers to work with and has received positive responses from educational institutions.

Amir Moravej’s start-up, Botler, also resulted from personal experience. Moravej earned a master’s in engineering at Concordia University, but was forced to return to Iran in 2014 when his work permit expired. Once there, he searched for information on immigration forums and in group chats among applicants. He then built a bot to surface the most relevant of the hundreds of cases being discussed. Originally unveiled in February as a way for users to test their eligibility for a speciﬁc Quebec program, the product is now being broadened to cover “the entire lifecycle of an application” for people applying for temporary or permanent residence. Lawyers and consultants can charge thousands of dollars to assist with such applications; Botler aims to charge a fraction of that.

Much of the information about the immigration process, along with tools for assessing eligibility, is already publicly available, says Sharry Aiken, an associate professor at Queen’s University’s faculty of law. “The people for whom any kind of value-added support is useful…with respect to economic immigration applications [in particular] are [those] who don’t quite ﬁt,” she said in an interview earlier this year. “They need assistance to massage their qualiﬁcations into the categories that will be accepted.”

Steering an applicant in the right direction on such subjective matters is beyond the ability of most bots. But Moravej says he encountered obstacles to the use of immigration technology well before the question of abnormal rule interpretation arose. His team recently followed up with some users whose simple cases had been deemed eligible by Botler for Canadian immigration programs. They found that the users had ultimately not applied, because they did not trust Botler’s determinations. “The whole process is more serious than just receiving information from a chatbot,” Moravej says they told him.

Still, there are plenty of applicants who would welcome assistance, human or bot, if only for the peace of mind. “I’m an engineer—I thought that I could understand everything, but I couldn’t,” says Moravej. “Even if you’re not one of those special cases, immigration is still a very difﬁcult process.”