How Seneca College trains the next generation of entrepreneurs 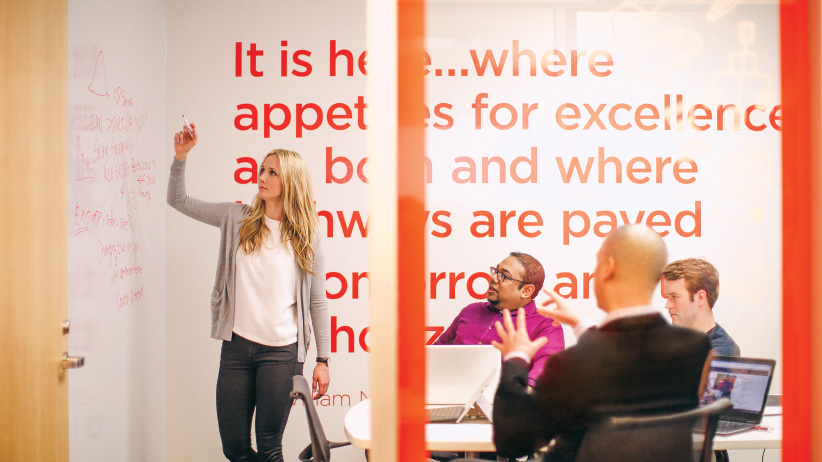 Since he was a kid, there was no doubt in Eric Dornan’s mind that one day he would run his own business. His father was an entrepreneur, so he could easily have taken over the family’s retail sales business. In fact, he was on track to do just that when he decided to follow a girlfriend to college.

“Truth be told, I didn’t think I needed a post-secondary education,” says Dornan. “I knew I was going to be an entrepreneur. But I thought, if I’m going to get a piece of paper, let’s get it from something I’ll enjoy.”

Dornan enrolled in Seneca’s business administration—entrepreneurship and small business program, expecting to coast through classes while working at his dad’s company. But once on campus, he was surprised at how engaged he was. Soon, he was participating in extracurricular pitch competitions and hatching a plan for his own business.

Seneca’s three-year advanced diploma program has long prided itself on arming students with the knowledge and skills they need to launch a company on graduation day. “We’re grooming them, getting them ready for what it’s going to be like in the real world,” says Peter Forint, the coordinator for the program and a professor. The school achieves that through a curriculum that blends in-class case study work with simulations, hands-on projects and pitch events. In one class, students get a feel for launching and growing a business using a SimCity-like software program. “It lets you learn and play and test your threshold for taking risks,” says Dornan. Meanwhile, students also learn traditional business management and accounting skills.

All the material builds up to a ﬁnal project in third year which students present at the annual “Shark’s Pond” event (“We’ve been calling it that for longer than [the TV show] Shark Tank has been around,” Forint says.) The event is Seneca’s version of Dragons’ Den, where students pitch a fully formed business plan to seasoned entrepreneurs and angel investors in exchange for criticism and sometimes funding. Some of the projects attract support from the likes of Futurpreneur, a non-proﬁt, or through the school’s partnerships with groups like Startup Canada or MaRS Discovery District. One student from last year’s class launched a company that imports fashion-forward hijabs and abayas into Canada. Someone else started a travel company for solo adventurers, and another student launched a line of snack bars made from the spent grains of organic breweries. “Students aren’t going to launch the iPhone 11 in my class,” says Forint. “We’re focused on things they can start themselves.”

Entrepreneur programs are gaining popularity at the university level, but the college model still offers a few distinct advantages: Seneca’s program is about half the cost of a university degree, it takes less time to complete, and students don’t need to make the high school honour roll to be accepted into the program. Like many successful entrepreneurs, Dornan didn’t have the marks to get into university. That never held him back at Seneca, and it’s not holding him back now as the co-founder and CEO of All or Nothing Brewhouse in Oakville, Ont. In their three years in operation, he and his brother Jeff have expanded into the spirits and mead business, they’ve bought up three more liquor licences and they’ve secured lucrative retail contracts with the LCBO and U.S. distributors. “Production is bananas,” says Dornan. “I can’t keep up with it.”

All the while, he says Seneca has remained an important resource. “Since graduating, the faculty and alumni have been really great at supporting us,” says Dornan.