Canadian universities are welcoming students back to class, residence and even karaoke events. But there’s still plenty of online instruction, and some schools have vaccine mandates. 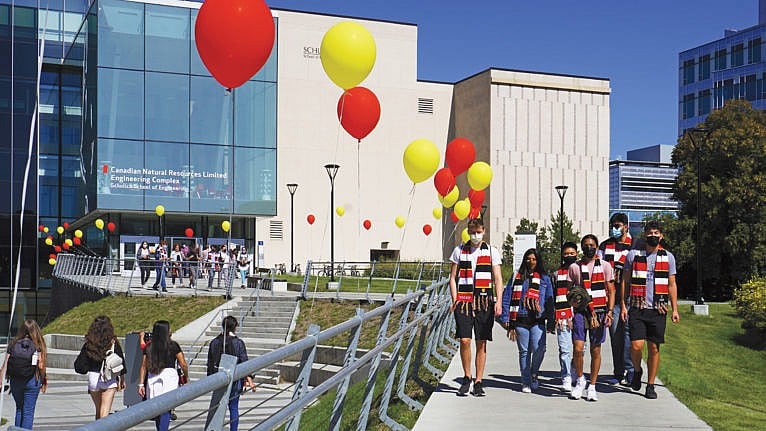 As provinces ease pandemic restrictions, most universities in Canada are planning for some sort of a return to campus this fall. Forget protocol on packed lecture halls, universities now have to crack down on house parties and homecoming crowds. *

Each school must abide by public health guidelines set out by their government’s ministry of post-secondary education to limit the spread of COVID-19, and some are going a step further by implementing vaccine mandates. So, for students who are looking forward to experiencing aspects of on-campus life, what’s in store? How will schools balance student safety with a semblance of the classic college experience?

We heard from seven Canadian universities about their plans for everything from vaccine mandates to air-filtration improvements to socially distanced orientations during this once-again-unprecedented school year.

READ: What happens to sexual assault report at Canadian universities? No one really knows.

Schools will return to classrooms in different degrees this September. The biggest university in the country, the University of Toronto (U of T) is planning to offer in-person activity for about 55 per cent of its 16,000 courses this fall, according to a school spokesperson; the percentage will vary significantly across departments and based on the nature of the program. At Dalhousie University, a much smaller school of about 20,000 students, most courses will be in-person with a small number online, according to Janet Bryson, associate director, media relations and issue management.

At U of T, students will have to upload proof of vaccination through the UCheck self-assessment portal, showing that they had their first dose by Sept. 13 and their second by Oct. 15. Those with an approved exemption or awaiting their final dose must participate in the school’s rapid screening program via free at-home testing kits. U of T will also require masking indoors and has made “significant adjustments” to their facilities, says the school spokesperson, including upgraded air filtration with a minimum of six air changes per hour in classrooms.

At press time, other schools, such as McGill University, hadn’t mandated vaccines this semester. “At this point in time, our view is that unless the government mandates vaccination, in the Quebec context we cannot legally require it,” says a statement from school spokesperson Frédérique Mazerolle. The Quebec government’s vaccine passport system mandates vaccination when accessing non-essential services, and McGill is implementing the passport for non-essential on-campus activities such as sports.

READ: More than virtual: How universities have embraced pandemic learning

McGill will return to about 85 per cent in-person teaching activity and is asking students to be in Montreal for the start of term, with the exception of those experiencing unavoidable travel, permit and quarantine delays. Accommodations will be available for vulnerable students and employees who have appropriate medical documentation.

The school’s safety plan for the upcoming semester “involves several layers of protection,” says Mazerolle, including mask requirements, distancing in non-classroom environments, contact tracing and optimized ventilation. McGill will continue working with the government to adapt plans and safety measures. 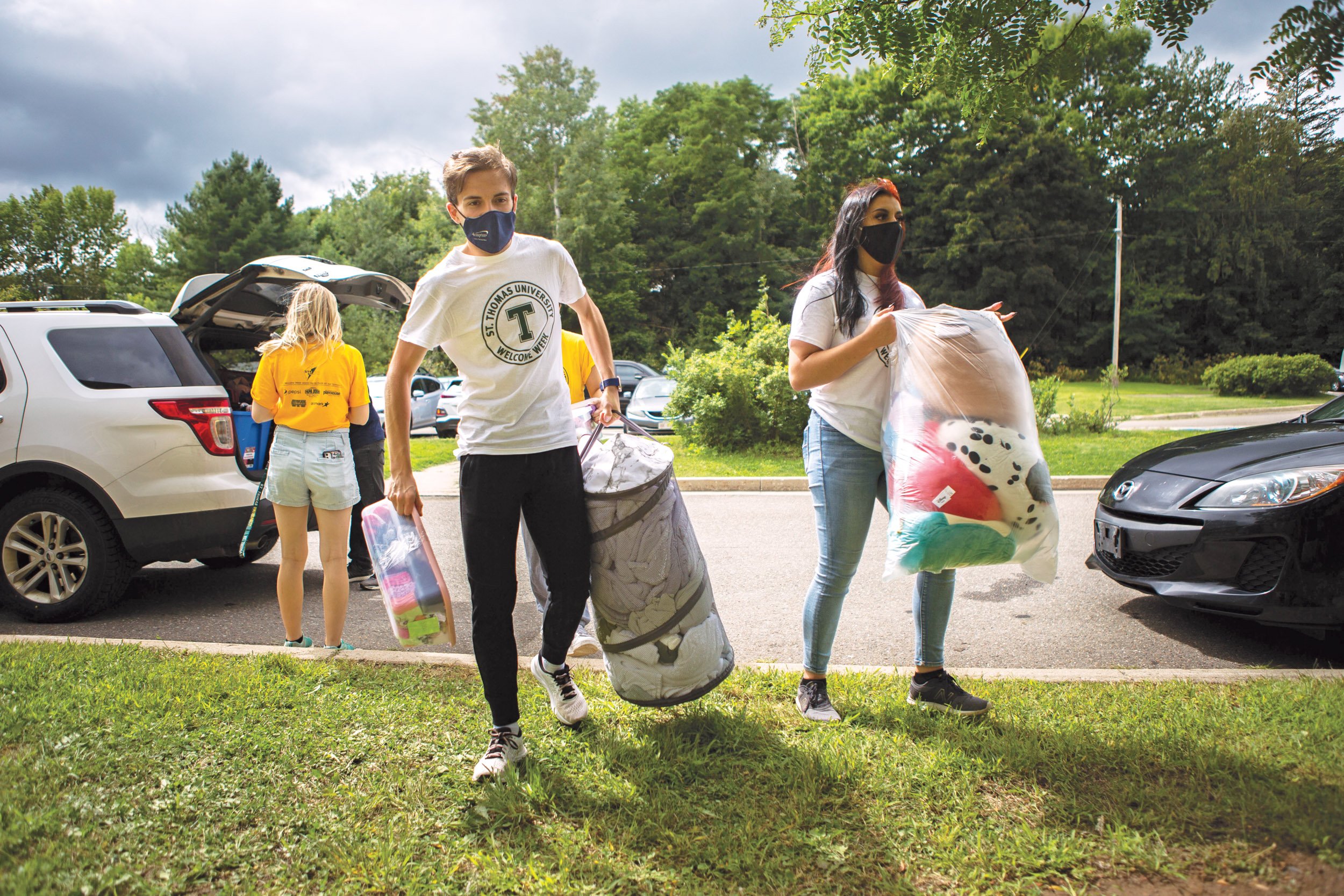 A volunteer helps a new student move into residence at St. Thomas University in Fredericton; universities are seeing an increase in demand for student housing (Photograph by Chris Donovan)

After months of reduced residence capacity, some schools, like the University of British Columbia, are opening their doors to more students. Matthew Ramsey, director of university affairs at UBC Media Relations, says UBC is seeing demand for student housing return to pre-pandemic peak levels and is prepared to meet the full capacity of 12,500 resident beds. “[Provincial] health guidelines indicate that the university can return to on-campus activities and that includes residences,” says Ramsey. “The Vancouver housing market is very challenging for students, and the university recognizes that demand.”

While buildings may operate at full capacity again, residence life will look a little different. As per B.C.’s guidelines, students living in residence must be fully vaccinated against COVID-19. They’ll also have to abide by a set of rules. Any parties, for example, that residents want to have must be “pre-registered for staff approval.” Ramsey says that students have received information about public health orders and UBC’s COVID-19 rules, as well as residence rules, through multiple channels and emails. If they choose not to adhere, they might face disciplinary proceedings that could include ticketing by the RCMP, investigation by the non-academic misconduct committee, loss of privileges, suspension and possible expulsion.

Other schools, limited by provincial health guidelines, are sticking with reduced residence capacities. Dalhousie residences will be open at 80 per cent capacity this fall under single-occupancy restrictions, says Bryson. In July, the CBC reported that, along with the University of Victoria and Queen’s University, Dalhousie had turned down some residence applications. 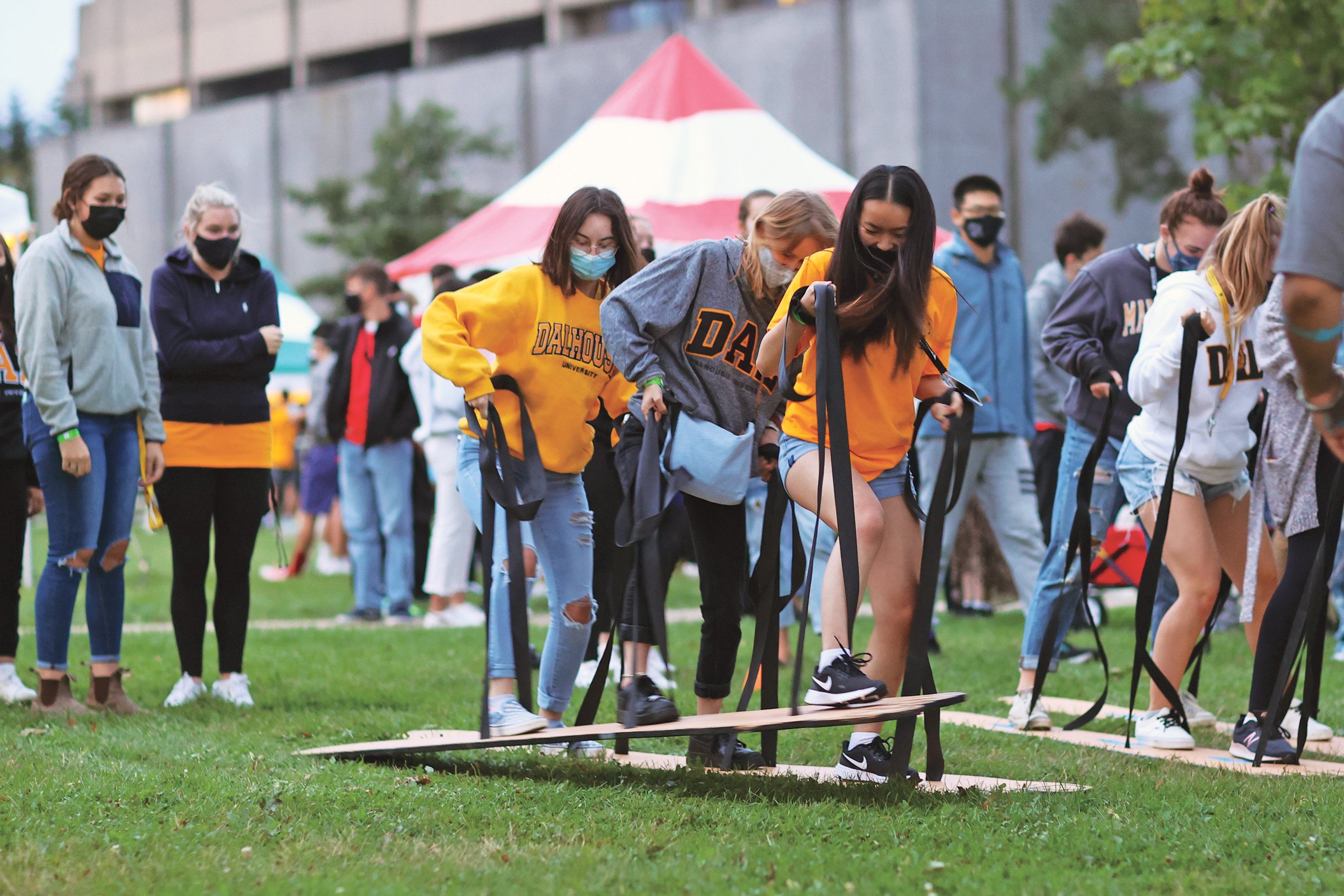 As long as health guidelines permit, Dalhousie’s “students can expect a return to on-campus events and programming,” says Bryson. The final week of August was a sneak peek into what that might look like. The school’s New to Dal program was developed for first- and second-year students to “discover everything student life has to offer with a mix of in-person and virtual activities.” The festivities continued into the opening week of school with in-person workshops on building skills for first-year students, as well as student-union-hosted trivia, sporting and karaoke events. The Dalhousie student union’s website makes it known that contact tracing will be mandatory to attend fall programming.

Students at U of T experienced a similar hybrid O-week, but with “more in-person activities in small groups for those living in residence,” according to the spokesperson. The school offered campus tours, meet-and-greets, scavenger hunts, outdoor movie nights and craft sessions, silent disco in the quad, carnival games and a video-games night on their roster of in-person events.

Other schools, such as the University of Calgary, opted to stay closer to the kind of programming we’ve seen over the past year, including a largely online orientation. Apart from an in-person scavenger hunt, the school focused on online workshops covering topics such as reintegrating to the physical campus, speed-friend-making, mental health, consent and equity, and diversity and inclusion. The student union also planned an in-person, self-directed scavenger hunt for the first week of school as well as free yoga classes later in the semester.

Many varsity athletes will return to fields, courts and rinks after a season away from competition. Most schools have mandated vaccines for athletes, the concern being that sports often require close contact. While many aspects of campus life depend on changing provincial health guidelines, athletics is one that takes into account other provinces’ rules as well.

READ: The lost year in education

“With athletics you’re not only talking about the students on your own campus,” says Ryan Sullivan, associate vice-president, enrolment management at St. Thomas University (STU) in Fredericton, STU athletes need to either be vaccinated or undergo regular testing, but Sullivan says testing won’t always be enough to compete. Anyone travelling to Nova Scotia from New Brunswick, for example, must be fully vaccinated or self-isolate for seven days upon arrival.

Some schools, including the University of Regina, are also implementing audience capacity limits, as per public health guidelines. According to an email statement, the university will allow audiences at indoor sporting events, but only at 50 per cent capacity and with an expectation that audiences follow university protocols, including masking.

*Correction, Oct 7, 2021: This story has been updated to include a recent reports of large crowds gathering at parties on campus and at university homecoming events.

This article appears in print in the 2022 University Rankings issue of Maclean’s magazine with the headline, “Meet you in the quad.”