Canada's drone industry? It's just getting off the ground. 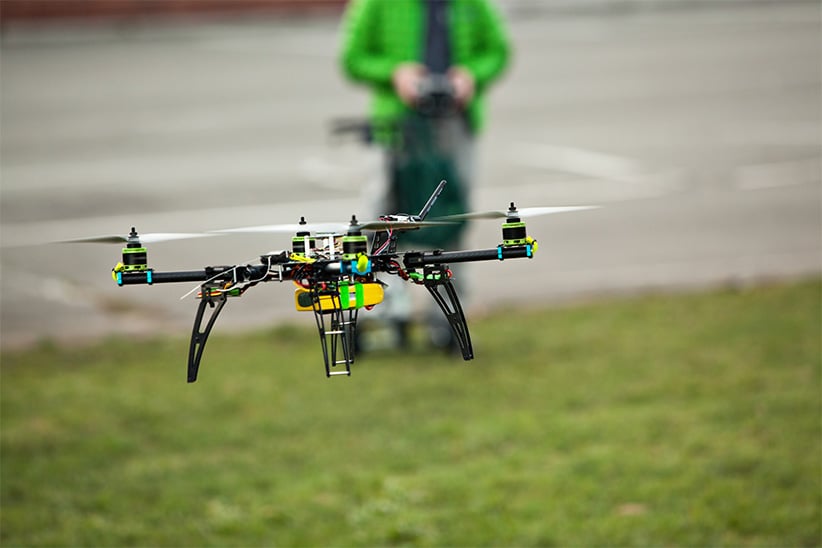 As someone who was finishing flight school when most teenagers are learning to drive, Alexander Harmsen comes by his aeronautic passion naturally. The 23-year-old just capped off a four-month internship at NASA’s Jet Propulsion Lab in sun-soaked Pasadena, Calif., where he helped to design a helicopter that may fly on Mars. Harmsen’s interests are a little more Earth-bound, though.

“Space is just very slow,” he says. “It takes a lot of money [and] there’s a lot of simulation involved . . . Unmanned aerial vehicles are a much better tool for a lot of these aerospace applications, because they’re cheaper [and] you can be a lot more risky with them.”

The University of British Columbia student—a few courses shy of an engineering physics degree—and many others are eager to leave the theory-intensive world of traditional aerospace behind and dive into the commercial UAV, or drone market. Drones, the whirring, high-tech descendants of toy-store remote-controlled choppers, may one day be dropping packages (among many other things) at doorsteps around the world. But the would-be engineers, pilots, programmers and technicians eyeing this growing industry are running into something of a hitch.

Until now, most Canadian colleges and universities have adopted a wait-and-see attitude because of skepticism about the drone market. Enthusiastic early adopters have had to do work-arounds, taking technology or engineering courses and toiling away on do-it-yourself projects. No training programs, as such, existed.

A handful of post-secondary institutions have seen the future, though, and are finally developing programs and offering credentials to the next generation of UAV workers.

Related: The drones have invaded

Professor Hugh Liu, founder of the Flight Systems and Control Lab at the University of Toronto, is one. He recently received $1.65 million in funding from the Natural Sciences and Engineering Research Council of Canada to train 150 grad students in unmanned aviation. The program, NSERC Collaborative Research and Training Experience (CREATE) on UAVs, will bridge the gap between research and industry.

Although the new courses will focus on grad students, youngsters may get the chance to enter the lab as well. “We have different programs, different projects involved and there will be a lot of room for undergrads . . . to participate,” says Liu, an expert on flight systems and control.

For eager underclassmen, Carleton University’s mechanical and aerospace engineering program’s fourth-year drone-design project offers another chance for UAV-savvy students to get acquainted with the miniaturized motors and intricate hardware. The program’s roots stretch back to a forest-fire-detection drone built in the early ’90s, and has more recently switched to UAVs for pollution detection and geophysical surveying. Its current project, the Corvus, a black-and-red wing-tipped UAV that looks not unlike the jackdaw that lends it its name, has thrilled students during test flights since the 2009-10 academic year.

Related: The rise of drones in movie-making

Meanwhile, the director of the University of Victoria’s Centre for Aerospace Research, Afzal Suleman, is training co-op, master’s and Ph.D. students in UAV technology, collaborating closely with the likes of Bombardier, Boeing and Meggitt PLC. Suleman, an aero-elasticity expert, says a number of his engineers have gone on to work with UAVs in a corporate setting, or have founded their own drone companies.

Which brings us to hitch No. 2. Drones are regulated by Transport Canada. That means, according to Suleman, that the regulation requiring operators to keep their drones where they can see them—what’s known as “visual line of sight”—makes it difficult for budding technicians or pilots to develop. “It’s too early for that,” he says. “If you cannot fly out of line of sight, there is no business model [for technicians].”

In fact, while drones have patrolled the skies over everything from Canadian college soccer matches to high-profile events such as Toronto’s Pan Am Games—and are being used to conduct flare-stack inspections, collect agricultural data on farms and perform a variety of law enforcement operations—the market remains constricted, largely due to the line-of-sight regulation.

In measured steps, however, Transport Canada is opening its airspace. The Canadian Centre for Unmanned Vehicle Systems’ Foremost Centre is a notable exception. The CCUVS training centre, just south of Medicine Hat, Alta., contains 2,400 sq. km of airspace dedicated wholly to drone research. (Transport Canada monitors the airspace to ensure operators have credentials and rules are followed.) Among other services, the non-profit offers training courses for pilots who apply for a special flight operating certificate.

Jeremy Laliberté, associate professor and fixed wing UAV project manager at Carleton University, agrees it’s somewhat early in the game to focus on training technicians and pilots, but points to a few institutions that already have programs in place. “I know there are lots of colleges that are looking at it, but there’s a lot of fluidity around the regulations,” Laliberte says.

Currently, CEGEP Chicoutimi, as well as Ottawa Aviation Services, through a partnership with ING Robotic Aviation, are both offering programs that teach students to pilot UAVs.

In Calgary, SAIT Polytechnic is in the early stages of investigating “the potential of a number of UAV initiatives,” as well as a pilot-training program, leadership in UAV regulations, and industry-based applied research to enhance commercial applications, says spokesperson Colleen Lavender.

Though Laliberté applauds the early adopters, he anticipates most colleges—the traditional go-tos for technician and pilot training for the aviation industry—will wait until Transport Canada defines clearer regulations before rolling out training courses. In the meantime, beyond tinkering in the garage on flyers of their own, future drone engineers and techs can prep with a heavy dose of physics, advanced functions and calculus. Once the training programs and drone industry truly get off the ground, engineers could earn $55,000 to $100,000, while technicians could earn between $45,000 and $80,000, as their peers in the aviation and aerospace industry do.