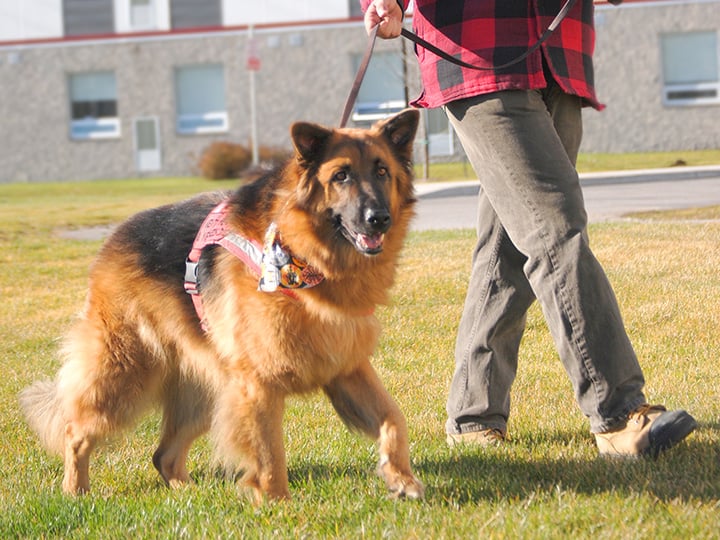 He is a little hairy, though.

“This year, we had a student who had made a big move across Canada,” says Rob McAulay, Niiji’s handler and the residence’s general manager. “She struggled a lot with homesickness, and she took Niiji for walks and played with him on a weekly basis. It gave her a sense that somebody was there, and [gave her] an outlet.”

Many of Canadore’s 3,500 full-time students move long distances to attend the school, located in North Bay, Ont. They’re drawn to a breadth of courses, from aviation to health care to drama. This year, they will be rewarded with a brand-new residence that includes private bedrooms and bathrooms, full kitchens and individual heating and air conditioning. “These little touches place control in the hands of our students, and let them maximize their comfort,” says Shawn Chorney, vice-president of student services.

The move can be even more difficult for the 15 to 20 per cent of the students who are are of Indigenous descent. “Culture shock, hundreds or thousands of kilometres between the college and home, and even separation from children, contribute to the challenges these learners face,” says Chorney. The school helps those students acclimatize in a number of ways: cultural spaces that include teepees and a smoke lodge, a decades-long pow-wow tradition, and an elder-in-residence program.

All students have access to traditional mental health supports, including counselling and a crisis hotline. But Canadore has also developed a more holistic approach, which includes a health and wellness lounge that offers massage therapy, yoga, meditation, talking circles and Zumba classes. “We’ve really expanded it out to addressing not just immediate needs [with counsellors], but also longer-term coping skills,” says McAulay. Niiji is part of that. “Animals have a very calming presence, and are able to soothe in a very different way. You can tell a dog something that you can’t tell another person. You know that’s not going to go anywhere.”

Third-year culinary management student Michael Campbell, 20, saw first-hand what a help Niiji (which means “friend” in Ojibwa) was when he lived in residence. “He came and watched movies with some of my friends,” he says. “That’s a simple thing, but it can be a big thing. Just the familiarity of hanging out with your dog and watching a movie and cuddling could help someone, if they were very stressed out in the first years.”

Canadore brought in the dog in 2012 after looking at the success of animals in hospitals and old-age homes. “We wanted to add something to our approach, to reach people on a level that other supports couldn’t,” says Chorney. In addition to booked playtimes, Niiji is also used to help de-escalate situations. When male students got into a fight, for example, the residence-life team who wanted to talk to the young men brought Niiji. As the dog approached the students, they began petting him and calming down.

The dog spends time on campus, giving students a chance to see him informally. His presence offers ongoing support and a connection—and, for those who come from families with animals, he’s another way to feel at home. “Students have said he was their first friend on campus,” says Chorney.