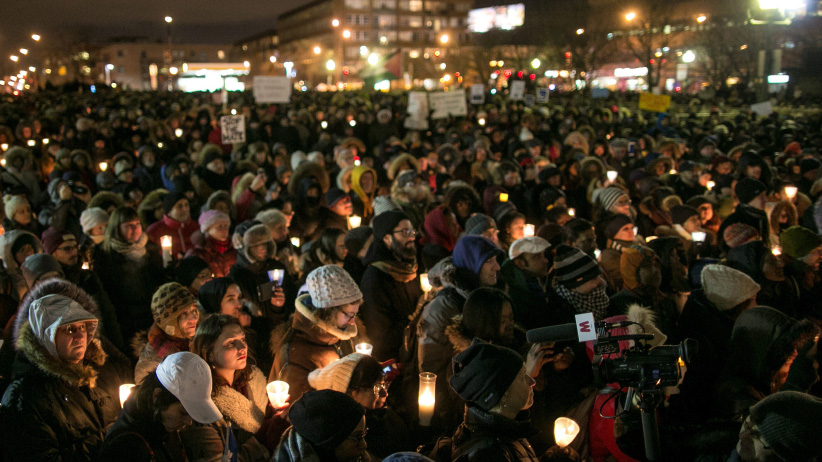 CEFIR is researching to prevent the type of radicalism seen during the terror attack at a mosque in Quebec City last January. (Amru Salahuddien/Anadolu Agency/Getty Images)

CEFIR is a program for polarizing times.

“There’s no global consensus on what radicalization means right now,” says program director Martin Geoffroy, a sociology professor with Cégep Édouard-Montpetit in Longeuil, Que. “But I would say I am much more interested in the processes leading to radicalization than a deﬁnition of radicalization itself.”

Even if he can’t deﬁne it outright, it isn’t difﬁcult for Geoffroy to point to what it looks like: men like born-again jihadist Martin Couture-Rouleau, who killed a member of the Canadian Forces in 2014; or Alexandre Bissonnette, charged in a shooting rampage at the Islamic Cultural Centre of Quebec City on Jan. 29; or neo-Nazis and bigots gathering en masse in Charlottesville, Va., in August 2017.

“As my colleague Gérald Bronner would say, we’re currently losing the battle on the cognitive market,” says Geoffroy, quoting a CEFIR research associate from the Paris Diderot University in France. On the internet, he adds, “the militants are taking over science and creating bias.” Geoffroy was among the ﬁrst academics to study the extreme right and Christian fundamentalism in the 1990s and was eventually motivated to begin teaching on the subject due to frustrations about the false assumptions and misunderstandings that surrounded it. Any religion or background can become extreme, he says. “For a long time, a lot of [the research] was linking radicalism with immigration and Muslim populations . . . [but] I’ve said it before and will say it again: there is no link between immigration and radicalism, no link at all.”

CEFIR and its academic partners are willing to bet the classroom will become a battleground for radical theories. So developing pragmatic approaches for exploring radicalization and religious fundamentalism, while teaching students about things like cognitive bias, helps prevent extreme ideas from distorting individuals’ thinking in the ﬁrst place.

With a mix of pedagogical, methodological and applied study, Geoffroy hopes to prevent fanatical attitudes from manifesting unchecked. The average age for an individual to become susceptible to radicalization, he says, is between 14 and 23, which is why intervention at the college level counts. The new research centre aims to help students approach this topic scientiﬁcally, “not necessarily to develop a critical thinking, which they already have, but a methodological way of thinking. That’s the main aim of CEFIR,” Geoffroy says.

The program’s three-year, $240,000 social innovation research grant from the federal government was matched by a coalition of participating colleges from the suburbs to the south of Montreal in the Montérégie region. CEFIR has plans to expand its footprint and impact.

In its ﬁrst year, CEFIR undertook a survey of students from its coalition—which includes Cégep Édouard-Montpetit, Cégep Saint-Hyacinthe, Cégep Saint-Jean-sur-Richelieu and the Royal Military College Saint-Jean. This data on students’ perceptions of radicalization and religious fundamentalism should be out early next year.

Next year, qualitative student interviews will add to that research, followed by the production of a pedagogical TV series and website on these subjects. “Maybe we’ll sell it to Netflix,” says Geoffroy.

Another research component of CEFIR, known as “mobility projects,” is also unique to Quebec in that it offers students an applied approach to this research at the end of a two-year social sciences diploma. “It’s a class where you almost have no class, but you and the prof must do a full research project,” the director explains. Last year, a group of students went to Bordeaux, France, to do work under CEFIR associate professors and academics. “It was not a simulation, it was a real set-up . . . we did the interviews and produced a full report, which we’re going to use in further research and present in conferences.”

The coalition plans to use this radicalization research to develop tools for use in school and training programs in the wider community. In its ﬁrst year, the collective published a document on the subject of Islamophobia, for example, that was designed to aid the education of not only students, but judges, police officers and military personnel.

“CEFIR goes so much further than research,” says Geoffroy. “It’s expertise and training. And we’re pretty good at training: we’re a bunch of college professors.”