As a child, Ren Louie learned traditional drumming. As a student, he learned the importance of storytelling. As an author, he found a way to bring them together. 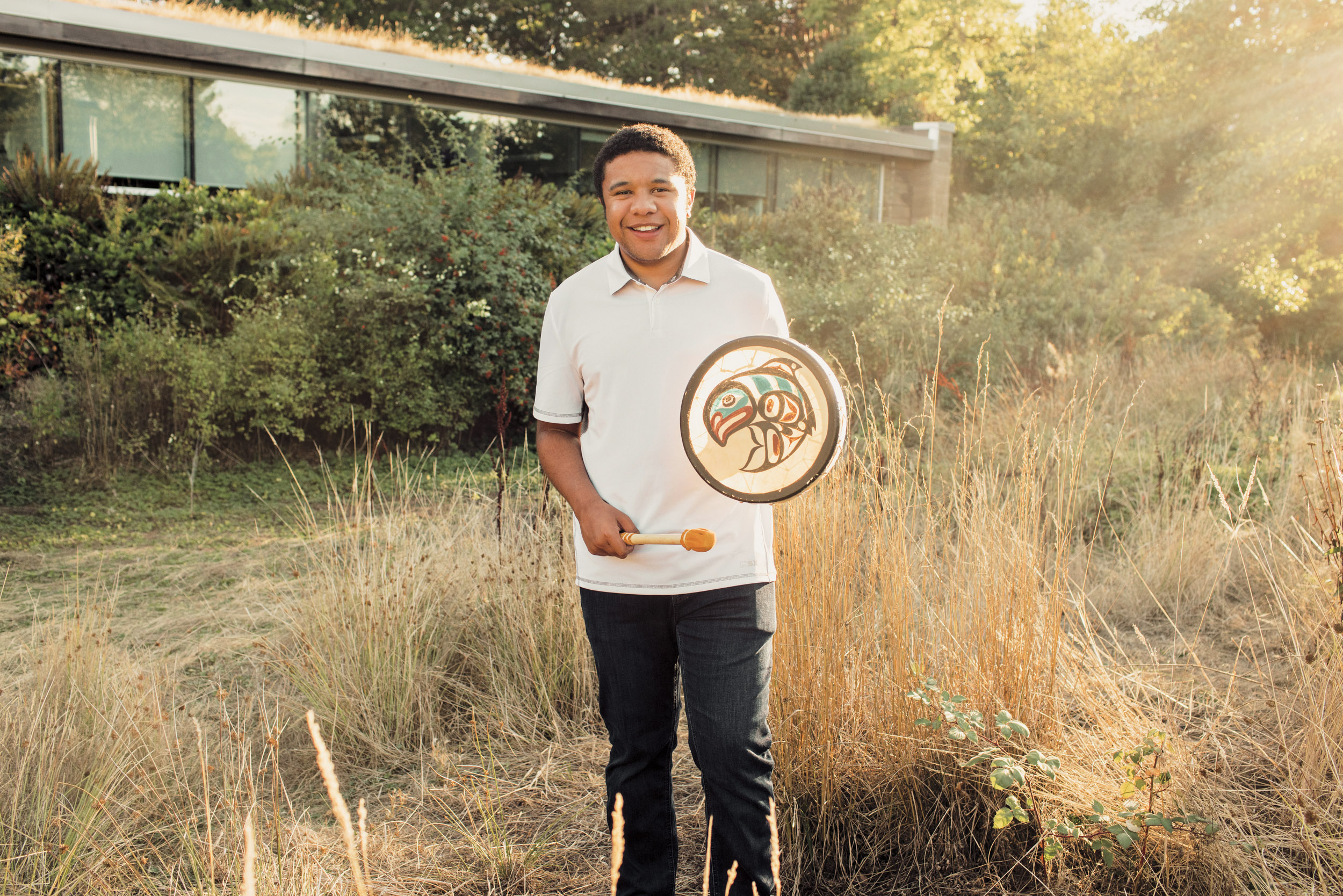 My traditional name is Wikinanish, which means “eldest son.” I come from the Nuu-chah-nulth people—specifically the Ahousaht—and was born and raised on the Coast Salish territories in Victoria. My post-secondary education started in the Indigenous studies program at Camosun College; after two years, I took a gap year before transferring to the same program at the University of Victoria, where I’m now in my fourth year.

There were very few Indigenous books in my classrooms as a kid and, of those, some were misrepresentations written by authors with little or no connection to the community. That problem was echoed by a librarian I became friendly with during my gap year. She talked about how challenging it was to find happy, positive Indigenous stories for kids that truly reflect the culture, since so many of our stories are rooted in trauma. That got me thinking, and I started journaling, just to see where it would take me.

One day, it occurred to me to write about an important part of my childhood—when I learned to play a traditional drum made by my mother, which she gave me on my birthday. In our culture, the first time we make something, we have to give it away. It’s part of our community orientation: you give before you take. I would take the drum with me everywhere. Even on the way to the grocery store, I would insist on listening to a CD with traditional singing, so I could practise my drumming. And that was the essence of the story I started to write: a shy Indigenous kid gets a drum, and that drum is a vehicle for him to express himself, understand himself and connect to his culture.

I wrote four drafts over the course of a year. I took a lot from my Indigenous studies education during the writing process. I was inspired by authors I’d studied—namely Eden Robinson, Richard Wagamese and Richard Van Camp. At UVic, I also learned about the importance of storytelling as Indigenous resurgence. Many Indigenous stories were never written down, and so were lost over time. We can’t replace those stories, but we can develop new ones rooted in the truth and reality of lived Indigenous culture.

When I showed my final draft to the librarian, she made me promise to submit it to a publisher. I figured if anyone knows a good story, it’s her. From the beginning, I wanted to work with Medicine Wheel Education, an educational publisher that bridges the gap between cultural stories and classrooms. They develop educational plans to go with their books to help teachers run appropriate activities around the story. This was crucial for me, since I wanted it to have a direct line to the classroom.

The folks at Medicine Wheel were really excited about the book and told me they were actually looking for a story about drumming. It was like it was meant to be. The editing process was pretty sparing—they stuck closely to my final draft, though the editor suggested adding a scene about when I played the drum at the Victoria Day parade with my mother and grandmother. It turned out to be one of my favourite scenes in the book.

For a long time in Canadian history, singing and drumming proudly was just not done, out of shame or fear. My grandmother’s generation knows that all too well, because of residential schools. And now, in her lifetime, I get to publish a story about just that—and listen to her read it out loud. It feels like coming full circle.

This story was told to Liza Agrba. Drum From the Heart is currently available for pre-order from Medicine Wheel Education. It’s slated for release in February 2022. This article appears in print in the 2022 University Rankings issue of Maclean’s magazine with the headline, “To make and to give.”