A Northlands College project is bringing hope to La Loche

As the Saskatchewan village of La Loche recovers from tragedy, a helping hand arrives in the form of adult basic education and skills training 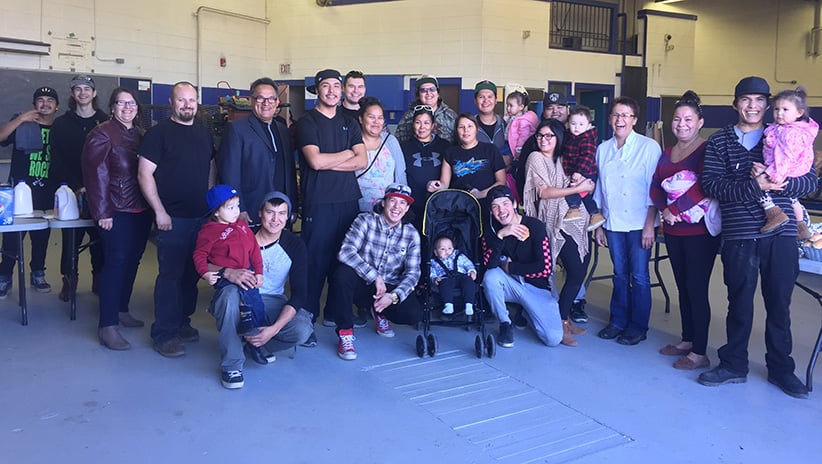 Teamwork: Staff and students at the Tri-Trades/ABE program in La Loche celebrate the new program

When Janine Boucher left her hometown to study at the University of Saskatchewan, she was wide-eyed and eager, but completely unsure of the way to her future. “I was a good student in high school, but when I got to university—once I’d made it—I didn’t know what I wanted to take,” explains the 31-year-old, who grew up in the northern Saskatchewan village of La Loche.

The remote community is known as much for tragedy—the horrific school shooting in January 2016, and issues such as a suicide epidemic and substance abuse—as it is for majestic lake views, boreal forest, and a strong cultural backbone. La Loche is steeped in Dene and Metis Indigenous tradition.

“When I left for university in 2003, I assumed that if I wanted to come back to La Loche to make a life, my choices were to become either an RCMP officer, a doctor, a dentist or maybe a nurse. I had no idea that any other opportunity existed,” says Boucher, who is proudly Dene. She attended the arts and science program at U of S for one full school year, but then dropped out, staying in Saskatoon another year, working odd jobs.

It’s a route that Boucher doesn’t want the next generation to follow. Now, as an administrator for the village of La Loche, as well as an area representative and elected member of the Northern Lights School Division board, she dedicates her career to her community and helping young people zero in on their educational path, sooner rather than later.

So Boucher is excited about the new educational programming being offered in La Loche through Northlands College, funded by the provincial government. Adult basic education (ABE) and skills training in heavy equipment, truck and transport and automotive mechanics launched in fall of 2016 for 15 young adults working to attain their Grade 12 credentials. It’s a pilot project, and according to Boucher, the village of La Loche is eager to see it continue. “The popularity has been undeniable,” she says, adding that more than 50 people applied for the 15 spots available in the 2016-17 year.

Armand Piche, 25, is one of those eager students. “I left high school just months before I was set to graduate,” he says. “I just gave up.” When he was a teenager, Piche was eager to take up carpentry and construction work. “My father is a really good handyman, he’s talented. He taught me a lot about mechanics,” Piche says. “But having an interest in carpentry wasn’t enough. I began to realize that I was going to need Grade 12.”

He signed up for online upgrading courses, but wasn’t motivated. Then a text message from his girlfriend changed everything. She had heard about the new ABE/Tri-trades program and pushed him to apply. “I thought, ‘Whatever.’ I’ll never get picked. When I found out I was accepted, I couldn’t believe it. I was so happy,” says Piche, who finishes in spring 2017 and then wants to pursue journeyman status in carpentry. “I love carpentry and it’s finally a possibility,” he says. “I want to live in La Loche and work here. It’s a beautiful place, and we are good people.”

Northlands College in La Ronge, Sask., 450 km away, delivers the curriculum and is responsible for hiring two instructors to teach in La Loche (classes take place at the Dene High School). The program is open to young adults over the age of 18 who are no longer in the K to 12 school system.

The program will cost the provincial government $315,000 for this school year, and that includes start-up expenses, equipment and instructor salary costs, according to Deb Young, spokesperson for Saskatchewan’s ministry of the economy. The ministry will monitor and evaluate the program before it decides whether it will fund future courses.

“The division has a high school graduation rate of about 21 per cent,” Boucher says, with a sigh. “That’s not very high at all, but it’s our job to make those statistics change for the better.”

When instructor Ruby Laliberte was hired by Northlands to teach in La Loche, she considered it her dream job. “My passion was to teach in northwest Saskatchewan and give back to my Aboriginal people,” says Laliberte, who is of Metis ancestry and grew up in Ile-a-La-Crosse, about 150 km south of La Loche. She teaches basic math and English as part of the ABE/Tri-trades program.

“These students are ecstatic for this opportunity to achieve [a GED],” she says. “One of my students would like to go into carpentry. Another wants to go into auto mechanics,” adding that most students are interested in trades or mining programs.

She is delighted that Northlands College is tailoring its approach to the needs of the students. “After the students brush up on the basics, we move on to Math Works 10 and 20, which is a math course that enables them to get into programs such as trade schools.” They also get GED preparation, and the first group will be tested in June 2017. Laliberte feels the classes will be successful in the long-term because it allows students to stay in the community, where they are connected to their family and culture. “Programs aren’t [usually] readily available, unless the individuals relocate to other communities,” she says.

Making education purposeful is an issue village leaders have wrestled with for years, but it became more urgent in the wake of the January 2016 shootings. Two teen boys were killed in their home, then a teacher and teaching aide were killed at the La Loche Community School, after a 17-year-old male opened fire on Jan. 22, shooting nine people in all. He pleaded guilty in October.

“There is not one person from La Loche that walked away from what happened in January without internal wounds. It’s the worst thing that has ever happened to us ,” Boucher says, explaining that in the small community of about 3,000 people (when you add in nearby Clearwater River Dene Nation), everyone is close-knit. “We have an obligation as community leaders to build local capacity and build a sense of hope.”

Boucher says sparking an interest in learning in people previously disillusioned with education cannot be undervalued. “Suddenly, people are thinking: ‘Okay, if I take these classes, I can stay in La Loche. I can have a future,’ ” she says. “The program is a gateway into entry-level jobs, but those entry jobs lead to better jobs and greater opportunities. A positive cycle is created.”