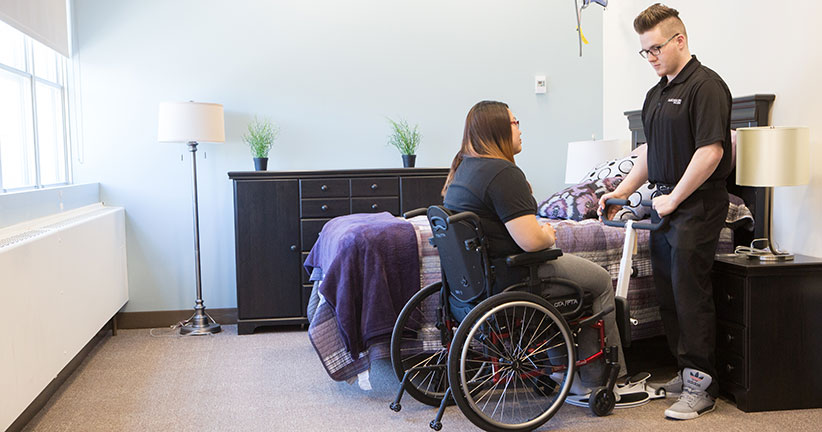 Tim Tosh opens the door leading into the Garbarino Girard Centre for Innovation in Seniors Care with the tap of a small card. Without it, it’s not only impossible to enter, but also impossible to leave the large apartment-like room, complete with a kitchenette, a bathroom and a bedroom. But it’s not a typical apartment for a couple of reasons. One: there are wheelchair-accessible countertops in the kitchen, a seat in the bathtub and a ceiling lift above the bed. And two: the centre is on the second floor of a college campus building.

“The clients we serve are early-onset dementia patients,” Tosh says, “which is why we have a lock on the door. Clients tend to have a problem with wandering.”
Tosh, a professor in Algonquin’s school of health and community studies, speaks in a hushed voice so as not to distract the class of about 20 nursing students who are using the room for a lecture on healthy eating. The centre acts as a classroom two days a week; the other three days are dedicated to providing respite care to more than 30 people with early-onset dementia—as many as 12 per day.

The one-of-a-kind adult day program, which opened in January 2016, was designed in collaboration with the Western Ottawa Community Resource Centre, a non-profit social services provider. Here, personal support worker students, as well as those studying to be massage therapists, chefs and physical therapy and occupational therapy assistants (PTAs and OTAs), work directly with the types of patients they’ll be dealing with in their careers. They organize games and exercises, and help them with whatever they need, from getting out of bed to re-teaching them how to do laundry. “We’re providing a space for [the patients], but also giving our students a chance to see what it’d be like to practise with somebody who has dementia,” says Tosh, a physiotherapist.

Suzanne Mondoux, 40, is a combined PTA and OTA student in her second and final year at Algonquin. One day per week she has a “hands-on, face-to-face experience with the seniors” at the centre. “It’s working on memory and on their issues of strength, endurance and range of motion. It’s quite rewarding.”

The lab is also a being used for applied research by groups such as AGE-WELL, a Canadian technology and aging network that researches memory, and Carleton University, which tracks patterns in seniors’ movements. “There’s huge opportunity at this point, especially with us being an aging society,” Mondoux says. “I don’t know if it’s even realized yet.”