Being a nurse in the North is challenging, but ‘there are salary perks’—big ones

For example, salaries of RNs in Ontario range between $21 and $40 per hour, while in the hamlet of Tuktoyaktuk, RN jobs can pay in the range of $70 per hour. 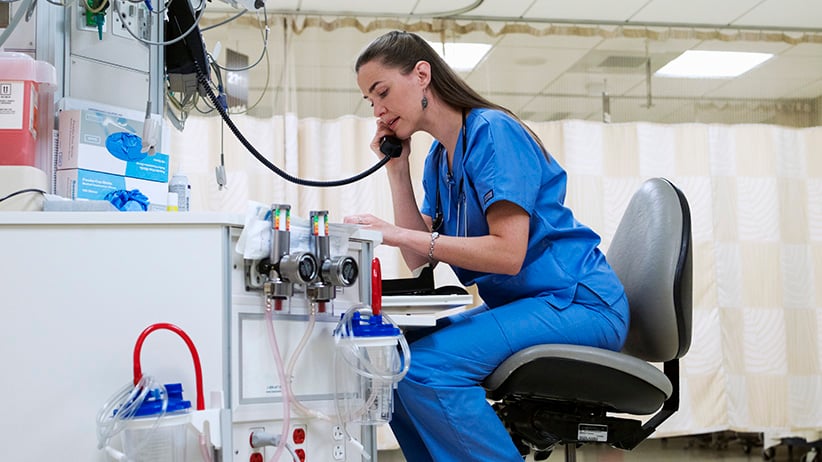 A nurse works in a hospital. (Dana Neely/Getty Images)

Retaining nurses in any remote community in Canada is a challenge, but it’s particularly true in the Far North. To ensure that the most basic health needs are being met, governments must fly registered nurses up a few weeks at a time, so that there is a rotation of nurses working with the local population. Some of these communities have only a few hundred residents, no road access, and only visiting physicians.

The rotation of RNs is essential to the community, and so they are paid generously. For example, salaries of RNs in Ontario range between $21 and $40 per hour, while in the hamlet of Tuktoyaktuk on the coast of the Beaufort Sea in the farthest corner of Northwest Territories, RN jobs can pay in the range of $70 per hour, a percentage of which is a northern allowance provided by the government.

“There are salary perks,” said Deirdre Jackman, president of the Canadian Association for Rural and Remote Nursing. “Because they have to deal with the harsher climate, isolation, [winter] darkness and the autonomy of practice that’s expected of them.”

Jackman, a clinical assistant professor at the University of Alberta, is conducting a study on the challenges of rural nursing, sending students on rotation to distant communities across Alberta. Though these places are not as remote as the Far North, Jackman is learning a lot about the benefits to both the nurses and the communities.

“If you’re an RN student, you’re known by everyone. You know how to wear the hats of nursing student, community member and professional,” she said.

Of the five nurses she and her research colleagues sent to rural communities as students, three of them chose to return for work (two in 2014 and one in 2015). The “students placed in larger and smaller rural facilities enjoyed the rural experience so much that they were offered and accepted a rural RN position,” said Jackman.

“Recruitment and retention is imperative in the rural and remote settings where the average age of an RN is older and there are less RNs per population.”

The best way to keep nurses in remote communities is to educate and train the people who already live there. This is precisely the role of Arctic College in Iqaluit, which offers both a two-year diploma for licensed practical nurses, and a four-year bachelor degree for registered nurses. Many of the students enrolled at Arctic College are Inuit, and some of the classes are being taught in Inuktitut. However, Arctic doesn’t graduate a high volume of nurses: in both 2011 and 2012, no nurses graduated at all.

Aurora College in Yellowknife, which only offers the four-year RN degree, sees a higher number of graduates. Sixteen students graduated in 2011, and 13 in 2012. But Aurora, which has three campuses and 23 community learning centres (CLCs) across the Northwest Territories, does not have the same emphasis on attracting First Nation students.

“We do have some Inuit, Metis and Dene students in the program, but not the numbers we had hoped for when we started,” said Pertice Moffitt, a manager and instructor of health research programs at Aurora, which has a total of 750 full-time students.

Moffitt studied nursing in New Brunswick but has spent most of her three-decade career living and working in the North. When she moved to Inuvik in 1982, she knew very quickly that the life suited her. “I fell in love with it,” she said.

In this environment, nurses must “be able to make really good assessments and develop protocols to follow.” They must also find creative solutions. Moffitt points to the time a nurse was unable to get a plane in fast for the medical evacuation of a child with an urgent need, so the nurse went to the lawyers and judge who were there for the court circuit. They let her use their charter to get the child out in a timely way. “The bottom line is that when you are in a remote location, you problem-solve with what is available to you.”

Moffitt has enjoyed working in small, underserviced areas, taking students on day-trips to learn traditional medicines from local elders, and she’s even learned some words in Dene to build stronger relationships. “It’s not for everybody. For some nurses who come, it’s overwhelming,” she said.

But, “if you’re looking for a challenge and you want to learn about another country, you don’t have to go to Africa or India, you have to go to our North.”