Canada's colleges need Chinese students. But it's not easy to recruit them. 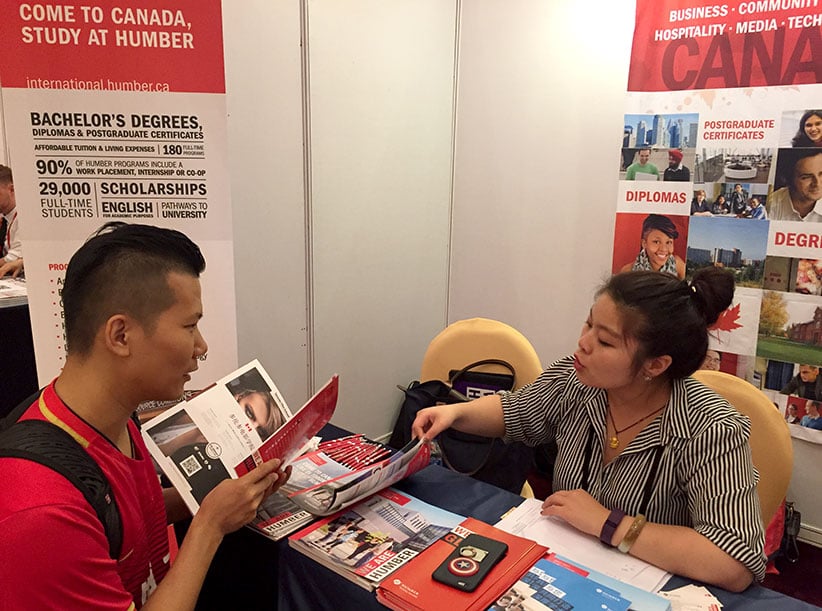 Jingdong Xue is disappointed that the University of British Columbia doesn’t have a representative at the massive China Education Expo in Beijing. There’s a sign advertising “UBC” in block type, but upon closer inspection it’s only a language school that rents space from the Vancouver university to deliver ESL in the summertime.

Xue is among thousands of newly affluent Chinese parents who attended this huge recruiting event in October 2016 at a former Summer Olympics venue, gathering information about where to send their children abroad for post-secondary education. He already had UBC picked out, after visiting Vancouver and touring the campus last summer with his daughter Linda. He came to ask about Linda’s chances of getting into the school, which came third behind perennial first-place finisher McGill University in Montreal and the University of Toronto in the 2017 Maclean’s University Rankings of the country’s big research schools. Xue says he can easily afford UBC’s international student tuition, which starts at $30,000, and may even buy a house for his daughter in pricey Vancouver.

Moments earlier, Northwest Community College recruiter Derek Lemieux tried to instead sell Xue on a diploma program at the college based in Terrace, B.C. His pitch: At a college like Northwest, students can build up their English skills in small classes and gain work experience through co-op programs. That could help Xue’s daughter land a job after graduation—a requirement for the permanent resident status many Chinese parents see as the ultimate goal of sending their offspring abroad. If Xue’s daughter is truly set on university, the credits can be rolled into a degree, Lemieux tells him.

Xue is not convinced. If his daughter can’t get into UBC, he’ll send her to another university in Canada, or maybe one in the Netherlands, which he was amazed to discover has hundreds of programs in English. “University first,” he says. “Normally colleges are regarded as a lower-level education in China.”

College representatives like Lemieux hear this all the time. Chinese high school students write a much-feared two-day exam called the gaoko that determines whether they go to a first-, second- or third-tier university. If their scores are especially low, college is the only option, so it’s seen as borderline shameful.

Canadian colleges are trying to explain to Chinese parents that it doesn’t work like that in Canada, where college is seen as a quicker route to a job, and credits can often be used toward degrees, even at universities.

The stakes are high. Canada’s 438,157 international students, most of them in post-secondary education, contributed an estimated $9.3 billion* in tuition and living expenses to the Canadian economy in 2014. They are shoring up struggling universities and colleges, filling seats at a time when demographics mean domestic demand is stagnant. Almost 57,500 Chinese students were studying at Canadian universities in 2014, while another 4,300 were attending colleges, according to the latest statistics from the Canadian Bureau for International Education.

But it’s about more than filling seats and keeping budgets in the black. It’s also about making sure potential new immigrants want to stay in Canada and have the skills to contribute. They’ll only want to stick it out here if they don’t feel too lost or lonely. And they can only legally stay in Canada permanently if they have the language and skills to land and keep a job. If things go badly, they might tell their friends to try Australia or Europe instead.

The key to success in this global competition is proper integration, and college officials argue that they do it best.

But there are pitfalls, and Qingqing Yao’s family learned this the hard way. Five years ago, they paid an agent in China more than $2,000 to help her get into a Canadian university. Yao accepted her agent’s advice to attend Algoma University in Sault Ste. Marie, Ont., which, she was told, had the best computer science program in North America. She would complete the first eight months of language training at a private school called Kennedy College in Toronto, then transfer to Algoma for computer science.

But when she arrived at Kennedy, she was shocked. “I did my research about what colleges look like in Canada,” she says. This wasn’t it. No cafeterias, no libraries, no study spaces, just a room in a squat suburban office building. Soon after paying her $12,000 tuition, she was informed by Algoma that it was no longer accepting students from Kennedy. An Algoma representative confirms they cut ties in March 2012, in part due to “questions surrounding the quality of instruction” and “misrepresentation.” In other words, students weren’t learning enough English to succeed. Kennedy “voluntarily surrendered its registration as a private career college” that May, according to the Ontario government.

Yao wanted to fight for a refund, but she couldn’t speak enough English to demand one. When she asked her agent for help, she says he just “disappeared.” Her parents suggested she return to China.

She stuck it out instead, starting her English training over again at Algoma, which required another tuition cheque for $18,000. A city girl from Nanjing (pop. eight million), Yao was in for another surprise when she landed at the airport in tiny Sault Ste. Marie (pop. 75,000). Not only did she find the town boring, but she felt lonely, and says the Chinese-speaking counsellor seemed too busy to help.

After a year, Yao transferred to a business management diploma program at Humber College in Toronto, which was much more like the colleges she’d seen in the brochures. Her small classes were focused on group work, which forced her to practise her English. After graduating with a diploma last year, she got a full-time job as an international recruitment representative for Humber. She now works with agents in China to help them see the value in what the college has to offer. As a polytechnic, that includes four-year honours bachelor degrees in everything from nursing and commerce to behavioural science.

Yan Wu says Yao is lucky she realized her mistake as quickly as she did. An engineer in China, Wu immigrated to Canada in 2000, but couldn’t get a job so she accepted an offer to a master’s program in human resources at Iowa State University. Even after graduating with high grades, she couldn’t find work in Canada, so she returned to China and worked as a headmaster at a school. Right before she was going to lose her Canadian permanent resident status in 2005, she gave up that job to take another crack at life in the land of clean air and maple leaves.

She ended up making burgers at a Wendy’s in Niagara Falls. The pay was $7.25 an hour. After a few months, she got a slightly better-paying job cleaning rooms at a Sheraton hotel. In China, says Wu, “I had people cleaning my house.”

Wu gradually worked her way into a job as an immigrant settlement worker, which forced her to learn about education. That led to a job as an international admissions coordinator at Sheridan College in Oakville, Ont., where she noticed that instead of vast lecture halls with rows of desks all facing the professor, there were small rooms with round tables. Then it dawned on her. “This is the table I really needed. This table encourages communication. It would have helped me improve my English.” A decade after graduation, she realized her master’s was a mistake.

Wu now works as a recruiter for Sheridan in China, where she tells this story to groups of students and parents in seminar rooms at events like the China Education Expo. She says parents’ ears perk up when she tells them her son makes $250,000 per year as a director at multinational insurance company after getting a degree in actuarial science at the University of Toronto.

Wu tells them she is convinced her son’s success happened because he was raised in Canada and built a resumé of real-world experience, starting with a job as a lifeguard at age 15 and including summer internships during his bachelor’s degree. She says his girlfriend, a Chinese international student who did the same degree and got higher grades, but has no work experience, hasn’t been able to find a job.

It’s a lesson on how Canada works. University is right for some people, but colleges like Sheridan, she agrees, “are the best fit when students are new to Canada.”

Correction: A previous version of this post said Canada’s 336,497 international students contributed an estimated $8 million in tuition and living expenses to the economy in 2014. The correct numbers were 438,157 students and $9.3 billion.
FILED UNDER: Colleges Guide 2017