A teacher has banished texts and lectures, and introduced a fresh, fun approach to business 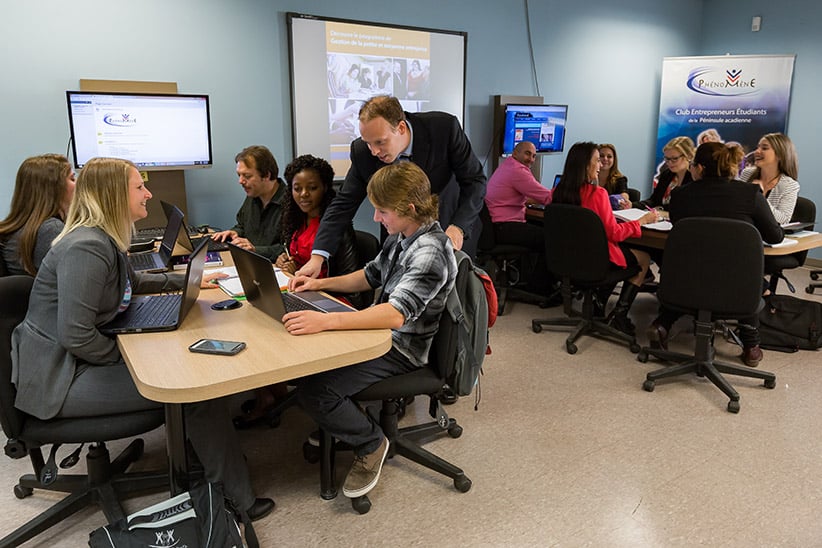 A business program at CCNB on the Acadian Peninsula campus is using a novel approach to education. The Gestion de la petite et moyenne entreprise (small and medium business management program) uses a classroom model called SCALE-UP, where students work in groups, interacting with each other, their laptops in constant whirr. Rather than learning from textbooks or lectures, the idea is that groups of students are given an interesting project to investigate, or problem to solve, on their own. No more paper, or individual work, says Gaetan Lanteigne, the teacher in charge of the program.

“Through this model, [we are] creating conditions for them to collaborate, to use technology, and to be creative,” says Lanteigne. And, he adds, “to gain real experience in the business field.”

Projects in his classroom of 12 students consist of helping a range of companies, such as agriculture firm J.B. Robichaud, or health-food shop Au Grain de Blé, among many more. For these companies, the students might draw up a marketing proposal, a human resources framework, or even a financial plan.

The teacher is there to act as a guide. “I coach the teams,” says Lanteigne, who introduced SCALE-UP in September 2012.

“[At first] there is a moment of adaptation because students are not used to being at the centre of their own learning,” he explains.

Lanteigne says he picked this model because he felt that lectured-based courses simply aren’t as effective anymore.

SCALE-UP, which stands for the rather unwieldy term Student-Centered Active Learning Environment with Upside-down Pedagogies, was invented by Robert Beichner of North Carolina State University in 2000. Since then, it has been adopted by schools all over the United States. CCNB is the first in Canada to try it.

CCNB won an award from Colleges and Institutes Canada in 2015 for introducing the concept to the business program along with other learning approaches such as Phénomène, an entrepreneurship club run by the class that has its own business where they sell firestarters.

Lanteigne, who has over 15 years of entrepreneurial experience, says that after the completion of the 40-week course, his students can develop their own start-up, or manage a business. He says he often has students who launch their own businesses in the region after graduating from the year-long program. To date, CCNB’s business grads have launched everything from a bakery to a construction company to a video production house. Talk about scaling up.