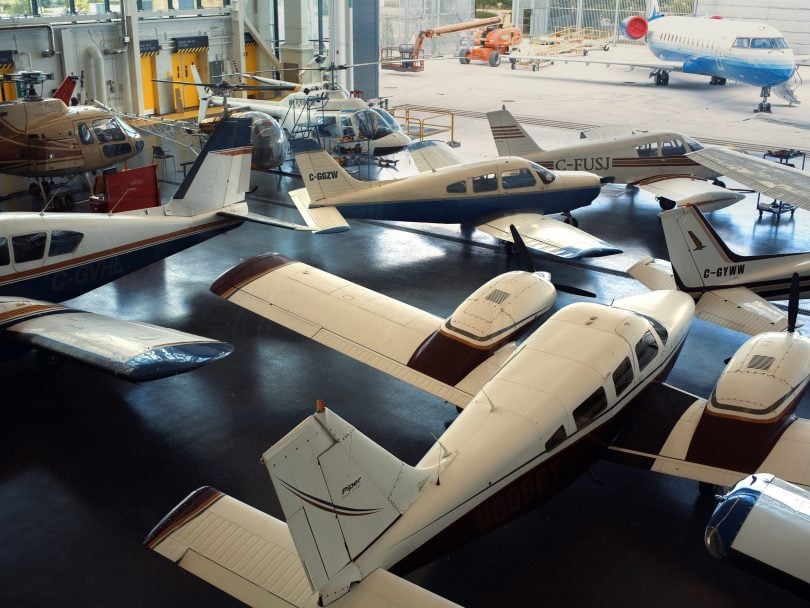 This article appears in print in the Maclean’s 2020 Canadian Colleges Guidebook with the headline, “Come land a job.” Subscribe to the monthly print magazine here.

A labour shortage looms over Canada’s aviation industry—by 2025, the sector is expected to see a deﬁcit of 3,000 pilots and 55,000 aircraft workers, such as engineers and technicians. Top aviation ofﬁcials said last year at a forum in Ottawa that if Canadians don’t ﬁll the gap, jobs will move offshore. Fortunately, Centennial College has come on stream with an ambitious project.

Welcome to the Centre for Aerospace and Aviation. The 138,000-sq.-foot campus, which cost $72 million to build, opened in January 2019 at Downsview Park. The new campus has two hangars—complete with an upgraded fleet of aircraft—and a suite of labs and learning spaces, a library, and beautiful student dining and study spaces, all flooded with light. The stunning glass facade overlooks an old military runway.

The space combines modern facilities with the redeveloped, historic de Havilland Canada building. (De Havilland manufactured aircraft there from the late 1920s to the 1980s, when the building became a museum.)

“Aerospace history enthusiasts take such pride in the site. Someone shows up every day to take pictures of the construction. That’s the kind of excitement that exists,” says Andrew Petrou, executive director of Downsview Aerospace Innovation and Research (DAIR), the consortium behind the project.

“It’s a marriage of traditional with modern capabilities. It’s about paying homage to the past while bringing the future in,” says Petrou, noting that the de Havilland building was derelict and in rough shape.

“We had world-renowned architects bidding,” he adds. “We kept the history, the natural life created by this building.” 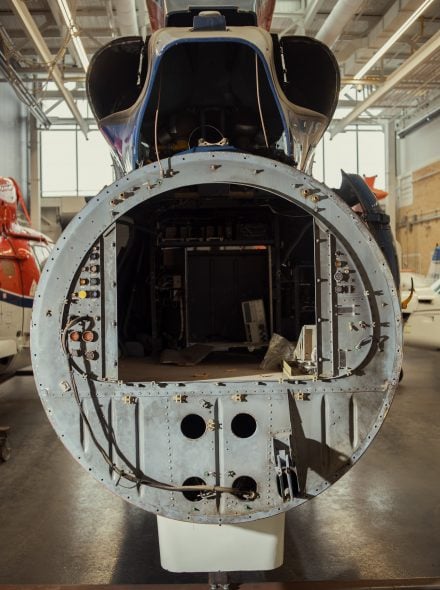 The large new hangars are central to the project. Together, they more than triple the space for aircraft from Centennial’s previous campus—which has allowed the college to expand its fleet. A brand-new commuter jet, four helicopters, two twin-engine Piper Seneca aircraft, and a CRJ-200 donated by Bombardier are just a few new additions.

“This past week, we had some executives come in from an aerospace company, and they said, ‘You can feel the spirit of this building,’” says Petrou.

Centennial College was the ﬁrst in Canada to offer Transport Canada-approved programs, in the 60s—but the modern facilities will signiﬁcantly expand students’ breadth of learning. In addition to transferring all the equipment from its Ashtonbee campus in Scarborough, Centennial has upgraded the teaching space with $9.4 million in tools, components and training aids: for instance, there is a fully functioning autoclave (an industrial pressure chamber) for curing composite products; the latest milling and lathe equipment; and an unmanned aerial vehicle (UAV) lab for drone studies and flying.

Overall, enrolment in Centennial’s aerospace and aviation program will expand from 300 to 900 students. At capacity, the campus will house 1,000 students—600 in aviation maintenance and engineering, 300 in engineering technology and 100 in airframe assembly programs.

There are two schools on campus: the School of Engineering Technology and Applied Science (SETA) and the School of Transportation. And of those, SETA has launched two new programs: aerospace manufacturing engineering technician and aerospace manufacturing engineering technology. Other programs on campus include aviation technician, avionics maintenance, aviation technician, aircraft maintenance and—starting in the fall of 2019—airframe assembly.

Further, the hub is strategically located near leading aerospace companies such as Bombardier and FlightSafety, Defense Research and Development Canada, and Canada Lands Company, which all have associations with the project. 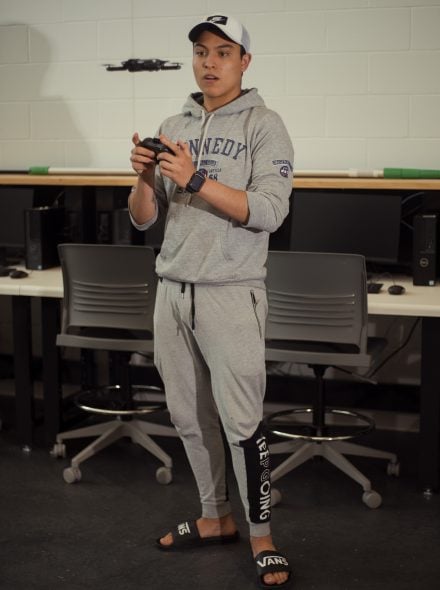 The Centre for Aerospace and Aviation is just phase one of the larger, national vision to create a renaissance in Canada’s aerospace sector. The DAIR consortium includes Centennial, York, Ryerson and the University of Toronto, as well as large aeronautics and space companies such as Bombardier, Pratt & Whitney and Collins Aerospace. (DAIR will eventually connect to other innovation centres in Canada, like the Montreal Aerospace Institutes (MAI) in Quebec, a partnership among major players in the aerospace industry and six Quebec universities. MAI serves as inspiration for the Downsview project.)

Altogether, their goal is to create a world-class aerospace hub at the Downsview site within the next ﬁve years. Both the provincial and federal governments have contributed $25.8 million and $18.4 million to the project, respectively.

Part of the plan is providing resources for small and medium-sized enterprises in the industry to scale up. So the hub will eventually have students, researchers and corporations working side by side in a tightly integrated ecosystem. The centre has already attracted attention from international researchers, as well as high-level Canadian expat companies, particularly in aerospace. “When they called, I was thinking they’ll just want to talk to us about the value we can bring to them,” Petrou says. “But the ﬁrst thing they say is: ‘We just want to come home.’”

Industry-driven research projects are already on the go at Downsview. Centennial has partnered with Safran Landing Systems—the world’s largest manufacturer of aircraft gear, headquartered in France—to develop electriﬁed landing gear (as opposed to current hydraulic systems). Ryerson has an aerospace lab at the site, where research focuses on aircraft interiors, space systems and wing development. In the coming years, the University of Toronto’s Institute for Aerospace Studies is set to move on-site.

“When it comes to aerospace in Canada, incubation can occur, but . . . what we need is dedicated infrastructure and scale-up ability, and Downsview is going to play a big role,” Petrou says.

Ultimately, this research and training centre will address the projected labour shortage in the aerospace sector. “One of the most exciting things about this project,” Petrou says, “is that it will encourage kids to dream about being involved in aerospace again. They can come to the site and say, ‘I want to do something in this world.’ And they can, because they’ll have the space and resources to do it.”

CORRECTION: Previously, the headline on this story referred to Centennial College answering to a shortage of pilots. In fact, they do not train pilots, but offers programs in aerospace manufacturing engineering, aviation technician, avionics maintenance, aircraft maintenance and airframe assembly.