Colleges are hiring mental coaches to pump up their sports scores 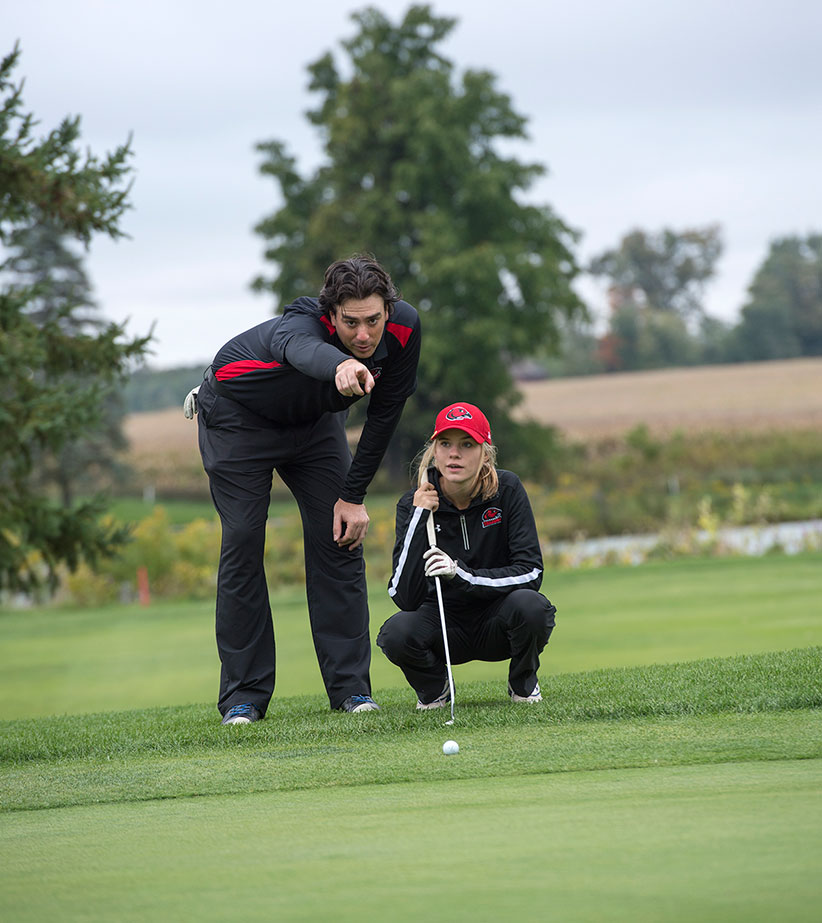 Mind game: For student athletes, training their brains as well as their bodies is integral to success

During her first year on the Humber Hawks women’s volleyball team, Alley Newman played her favourite sport as if everybody was critiquing her every move.

“I would care more about who was watching or who I wanted to impress,” says the 23-year-old, now team captain and pursuing a post-grad diploma in advertising and account management at Humber College. “I was scared of messing up and I didn’t want my coach to be upset with me or get taken off the team.”

That anxiety all changed when the team was introduced to Kara Zakrzewski, a mental fitness coach armed with a master’s in sport and performance psychology from the University of Ottawa. The former professional beach volleyball player taught Newman to train her brain to focus on the present rather than on the expectations of those on the sidelines.

Today, Newman still digs, spikes and blocks, except she doesn’t care who’s watching.“Now I feel like I’m supposed to be out there on the court,” she says, crediting Zakrzewski, 37, for helping her up her game.

The Canadian Collegiate Athletic Association (CCAA) has witnessed a recent trend toward athletic departments subscribing to the “get your head in the game” mentality by adding a “mental coach” to team rosters. “I think we can say for sure that it is becoming popular, and also employing sports psychologists,” says CCAA president Leigh Goldie. Although his organization doesn’t track numbers at its 94 member institutions, he maintains it would be “more common for a college to have a mental coach compared to not having one at all.”

Yet the idea of using such a professional to help student athletes isn’t new. Universities in particular have recruited internally via kinesiology and psychology faculties for quite some time. Goldie believes sports psychology has finally made its way to the college scene partly due to “the growing willingness to talk about mental health, balance and dealing with stress on campuses across the country,” the locker room being no exception.

“The message is finally getting across that sports psychology is a proactive approach to increasing performance as opposed to, ‘That person needs a shrink,’ ” he says. In today’s world, “brain over brawn” fitness is the next frontier in athlete training.

“I don’t care how strong you are, if you are unable to perform at crunch time then you’re up the creek without a paddle,” Zakrzewski says.

To achieve mental toughness, student athletes must learn how to keep their attention and emotions in check. This isn’t always easy to do when the realities of being a student set in.“How do they manage having an exam tomorrow when they haven’t studied nearly enough, but also have a game this evening? How do you perform when you have all these stresses around you that you haven’t experienced before?” she asks. “There’s a lot of weight on student athletes’ shoulders, and in most sports, if you tighten your muscles, you aren’t performing the same. As muscles tense, reaction times slow.”

Stressors can also change shape as students mature. Newman recalls her brain “felt more disorganized” during her first year on the team. “I was just happy seeing court time and didn’t really know how to study or organize my schoolwork coming out of high school,” she says, adding she’s since implemented the basics of time management and writes down all her deadlines in advance.

When Fanshawe College’s athletics director Nathan McFadden, a former manager of hockey and team operations for the Toronto Maple Leafs, arrived at the London, Ont.-based school in December 2012, one of his first plays was hiring a mental coach. In doing so, Fanshawe became the first Ontario College Athletics Association school with a dedicated mental fitness expert on staff. “Our student athletes weren’t mentally tough when I came here,” says McFadden. “Unequivocally, across the board, that is no longer the case now.”

He cites Fanshawe’s medal count during the 2015/16 season as proof that a mental coach can help a team beat its competition. Last year, the Fanshawe Falcons’ varsity teams brought home a combined 17 provincial and national medals.

At the heart of Fanshawe’s strategy is reprogramming how student athletes handle stressful situations, “whether it’s making a foul shot with two seconds left on the clock or recovering from a negative point streak in the game when the other team is running on you,” explains McFadden.

Working with nearly every single one of Fanshawe’s 19 competitive teams is Charles Fitzsimmons, 29, a University of Western Ontario Ph.D. candidate in sports psychology who plays golf competitively as an amateur. His approach is to prevent athletes from becoming lost in their own thoughts.

“Just because we have time to think, doesn’t always mean we should,” says Fitzsimmons, a full-time mental coach who plans to make a career of it in an industry where qualified coaches can command $100 an hour. “Sometimes playing well is getting the ‘thinking’ brain to turn off and letting the ‘motor’ brain do the work.”

This eventually leads to the most satisfying part of his job, when students finally rediscover their love of sport. “I had an athlete once who came to me and said they weren’t enjoying their sport anymore and were ready to quit,” he says. “We worked on a couple things and a number of days later they sent me a text message saying they enjoyed playing again. It was the most rewarding thing I could have asked for.”