Got a business problem? College students can solve it.

Applied research programs at SAIT show how college students, facilities and faculty can tackle entrepreneurs’ challenges and gain real-world experience in the process 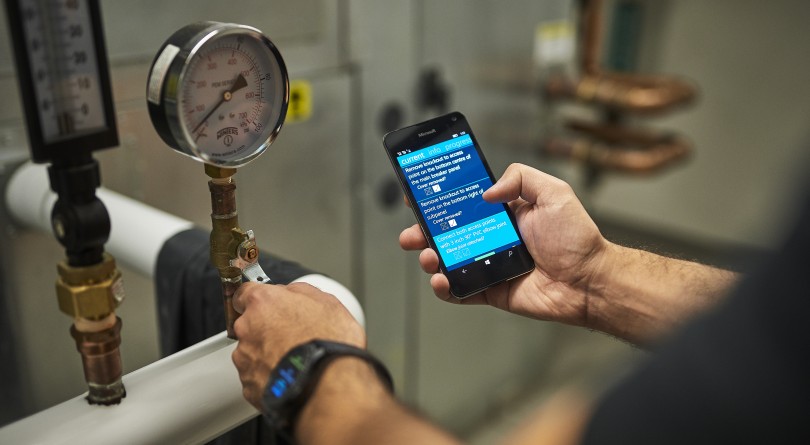 The Contextere app is seen in use in the field. (Photograph by Jessica Deeks)

Three years ago, Carl Byers quit his job as an executive at a software company to chase his entrepreneurial dream. Byers and his business partner Gabe Batstone wanted to develop an “intelligent agent,” software that would use geo-location and artificial intelligence to provide tailored, real-time information to industrial workers in the field via their smartphone or smartwatch. By developing what they call “blue collar AI,” the founders of Contextere knew they could increase productivity on industrial sites, while increasing worker safety and lowering costs.

Byers and Batstone had a solid idea and decades of tech experience between them, but, like many entrepreneurs, they lacked the capital to develop a prototype to attract their first clients. “It was my partner and myself, unpaid at the time, casting around,” recalls Byers. The founders of Contextere could have spent months seeking private investors. They could have risked all their own money. Instead, they turned to the applied research power of Canadian colleges.

Applied research—the collaboration between a college or a polytechnic and an industry partner—received a big boost from the federal government in its last budget. By adding $140 million over four years for the Natural Sciences and Engineering Research Council’s college and community innovation program (CCIP), the government hiked the main grant for applied research in colleges by 53 per cent. The new money will go toward applied research where a company with a real-world problem connects with a college or polytechnic with the knowledge and specialized equipment to help solve it. Applied research provides students with valuable opportunities for work-integrated learning during their studies and companies with the solutions they need to innovate.

One might think of universities—not colleges—as research hubs. But colleges specialize in a type of research that is usually faster than multi-year university projects and often yields more tangible results. “This shouldn’t be seen as big-R research, as in, ‘I’m finding a cure for cancer,’ ” explains Nobina Robinson, the CEO of Polytechnics Canada, a national advocacy group. “This is: build a prototype, do a cost-avoidance study, do a beta test, do a marketing study.”

In 2017, the 13 member schools in Polytechnics Canada partnered with 2,800 companies on applied research projects, says Robinson. Seventy-seven per cent of those companies were small- and medium-sized businesses. “Our members have always been committed to the CCIP and, more important, the cause of small-business innovation,” says Robinson. Members of Colleges and Institutes Canada, another advocacy group representing post-secondary institutions in every province and territory, engaged in applied research projects with nearly 7,300 businesses and organizations in the 2016-17 school year. Colleges and Institutes Canada estimates that an impressive 27,000 students worked on those applied research projects and 85 per cent of the industry partners were small- and medium-sized businesses.

An important facet of applied research is that the industry partner almost always retains ownership of any new intellectual property that arises. This is the opposite of university research where, generally, the university owns the research results. Applied research also allows small- and medium-sized businesses access to specialized and expensive equipment. “It’s requiring the application of some existing know-how, or the development of a prototype using a new type of equipment, or a piece of equipment that the inventor, or company, wouldn’t otherwise have access to,” explains Rick Tofani, the director of applied research and innovation services at the Southern Alberta Institute of Technology (SAIT) in Calgary. For example, a company working on an applied research project at SAIT could have access to a CNC (computer numerical controlled) milling machine, complete with a highly trained expert to operate it.

In the case of Contextere, the company needed both capital and technical expertise when it was ready to go from idea to prototype in 2016. Byers and Batstone applied for, and received, two $25,000 CCIP grants from the Natural Sciences and Engineering Research Council, one supporting work with a software development team at SAIT and another to collaborate with the user-experience and interface-design specialists at Algonquin College in Ottawa.

At SAIT, Byers teamed up with Chris Zaal, a research associate at the Centre for Innovative Information Technology Solutions. When Contextere started working with SAIT, Byers “had a great idea, he just didn’t have much of a framework set up,” says Zaal. The applied research team, including two SAIT students, built a database for Contextere. They also built apps that would sit on a mobile device and push information to a Microsoft smartband, which looks similar to a Fitbit.

Being in Calgary, the hub for Canada’s oil industry, SAIT’s work on the Contextere project was tailored for potential applications in the energy field, with the overall goals of increasing worker efficiency and improving safety. “You have someone at a location, standing in front of a valve,” Zaal explains. “The valve needs to be closed. If it’s a brand-new guy into the field, this might be the most low-level instruction you could possibly think of: ‘Step 1. Walk up to valve. Step 2: Put hands on valve.’ It could be very rudimentary. For somebody who has been on the job for a while, which is something we can differentiate based on the user, it could say something along the lines of: ‘go to valve 23 and close,’ and that would be all the information they receive because it’s been determined that they’ve been on the job for several years and know what they are doing.”

Zaal, a full-time SAIT employee who works on applied research projects, had two student interns from the school of information and communications technology working with him during the Contextere project. The students built most of the apps and learned a new programming language in the process. “They got exposed to technologies they hadn’t touched yet in their curriculum,” Zaal says.

Daniel Huot, a SAIT graduate, was studying in the information communications technology diploma program when he was hired for a four-month summer internship working with SAIT’s applied research and innovation services in 2017. “To actually get real-world, client experience, it was a total shock, but in a good way,” recalls Huot. “It was a really cool experience to see how research and development takes place.”

The Contextere project had already wrapped up when Huot started his internship, so he worked on a project helping to design and build a refrigeration smart-truck prototype that used sensors to track temperature and location and identify any issues. He also worked on drone technology research for the cattle industry, looking at ways to use drones to help ranchers better track their herds. For that project, Huot designed and built a web interface where data collected with the drones could be uploaded and displayed.

READ MORE: How colleges are welcoming pros from other countries

While working on these projects, Huot learned to use new programming languages—Python and C++—and worked with radio frequency technologies and firmware, all things not included in his formal SAIT studies. All of this experience helped him land a permanent position with applied research and innovation services right after graduation the following April. Huot, who now does software development as a program co-ordinator, enjoys his new career in research and development. “I love my current job,” he says. “Every day is a bit of a new challenge.”

Whether it’s through an applied research opportunity, or in some other form, work-integrated learning is something potential college and polytechnic students are often looking for when they choose to which programs they apply. Having that experience on a resumé can make that applicant stand out from the stack after graduation, says Saranchuk. “It shows that they can already succeed in that environment,” she says. “I think that’s a huge thing for students these days. Especially in hard economic times, you need something that will set you apart from someone else. Work-integrated learning could be that advantage.”

While students who work on applied research projects will come out of school with marketable skills, businesses are the other clear winners. At Contextere, the database and app that came out of its applied research contracts was just what the company needed. By the fall of 2016, Contextere had a physical product to take to trade shows and that netted the company its first big customer. “Having a proof-of-concept that we could actually show, that was more than a PowerPoint, allowed us to lock down Lockheed Martin as our initial launch customer,” says Byers. Contextere closed a US$1.1 million contract deal with the company’s aeronautics division in May 2017.

Contextere now employs eight people, was selected to work in the Canadian Technology Accelerator in New York City, is working on a project with United Technologies (another aircraft manufacturer), and has partnered with Samsung to get its intelligent personal agent software on smartwatches. The company just celebrated its three-year anniversary.

Byers thinks Contextere would still have gotten its product to market without the CCIP funding, but it would have taken at least an extra six months—maybe more—which can be a lot of time for two executives to go without income. “It accelerates the time to market,” says Byers. “We would have eventually did what we had done, under those applied research contracts, but we would have had to wait for more consulting revenue, or invested our own money into the process. We wouldn’t have been able to bring the product to market as quickly as we did.”

Byers says he applauds the new federal funding for applied research and he hopes it will help more small- and medium-sized businesses. “One of the challenges with CCIP is because it’s a very good opportunity for young companies, like ourselves, to get moving and to get work done and to work together with applied research organizations, with a relatively low overhead, it ends up being fairly oversubscribed,” Byers says.

SAIT’s Tofani agrees, saying this new funding for applied research at colleges is long overdue. The Natural Sciences and Engineering Research Council funding for colleges began in 2003 when there were just 20 colleges eligible to apply, he says. Fast-forward 15 years and, up until this new funding announcement, there were more than 80 colleges and polytechnics now eligible to apply for the same pot of money. “The program, up until this year, had really maxed out,” Tofani says. “There really wasn’t any additional funding that was available. This additional funding will be just like premium-unleaded gasoline and will get us going again.” With a fuel top-up worth $140 million, the road is wide open. It’s now up to Canada’s most innovative companies, researchers and students to determine just how far they can go.