GPRC has Canada's only authorized program for Harley-Davidsons

There's nothing like a 15-week technician certificate program, like the Harley-Davidson course at GPRC, to rev your engine 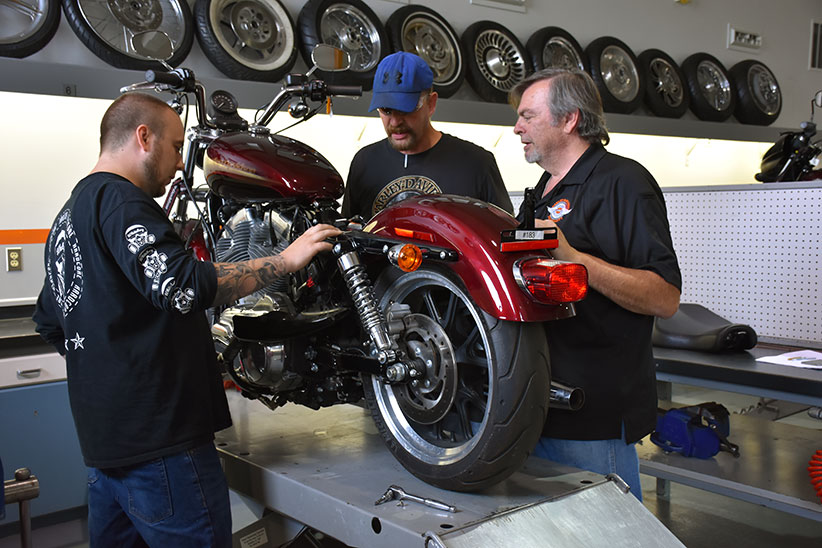 It’s a biker slogan: “Bikes don’t leak oil. They mark their territory.” Well, not if they’re Harleys, and not if Grande Prairie Regional College graduates like Alex Alvarez can help it.

Alvarez didn’t own a bike and wasn’t particularly interested in them when he started the course, but Harley-Davidsons “just get in your bloodstream,” he says. As a high school student in Whitecourt, Alta., about 280 km southeast of Grande Prairie, he wanted to avoid a trade in the slumping oil and gas industry, but wanted to take advantage of a dual-credit program that allowed him to take college-level courses and get high school credits, allowing him to graduate faster. “It was an awesome course; the instructors were super great,” he says. And the job? Alvarez—who just got his motorcycle licence and plans to buy a 2016 Dyna Low Rider—loves working with passionate Harley owners.

The course, offered twice a year at GPRC’s Fairview campus, has a dedicated shop on campus: the Trev Deeley Building (named after a well-known Canadian bike racer and dealership owner). There are eight bays, each with a lift bench, for the 16 students to use. Students have access to the latest tools and a computer at each bay with the specialized digital technician program, which is exclusive to Harley technicians.

The $6,700 course (including books, equipment and supplies) started in 1989, when Harley-Davidson and Deeley, who helped fund it, realized Canadian dealerships desperately needed more highly trained motorcycle techs specialized in their brand. “We have more than 100 bikes in the training centre,” says instructor Carl Ball. “We tend to stick with the stuff [that’s] as current as possible. Quite a few bikes are donated.” In fact, Harley-Davidson Canada loans the college about 20 current-model hogs a year, which are kept for students to work on for about two years.

The curriculum is constantly updated. Students, explains Ball, “learn to identify the different models, get familiar with hand tools, push the motorcycles around—there’s a trick to that. They start with the wheels, brakes and electrical system, then the drive systems, rebuilding forks, swing arms, shocks.” Engines are taken apart and rebuilt.

No surprise: ear protectors are needed. Even though class bikes have stock exhausts instead of the ear-bursting straight pipes so many leather-clad hog owners prefer, it gets loud.

Salaries for Harley-Davidson technicians—depending on location—range from $15 to about $30 per hour. Students—about 15 per cent of whom are female—have come from all over Canada, as well as China, the Netherlands, the U.S. and the U.K. “It’s a pretty diverse bunch,” says Ball. “A lot of them have motorcycles. They love the brand and they love the product, and they want to work on them.”