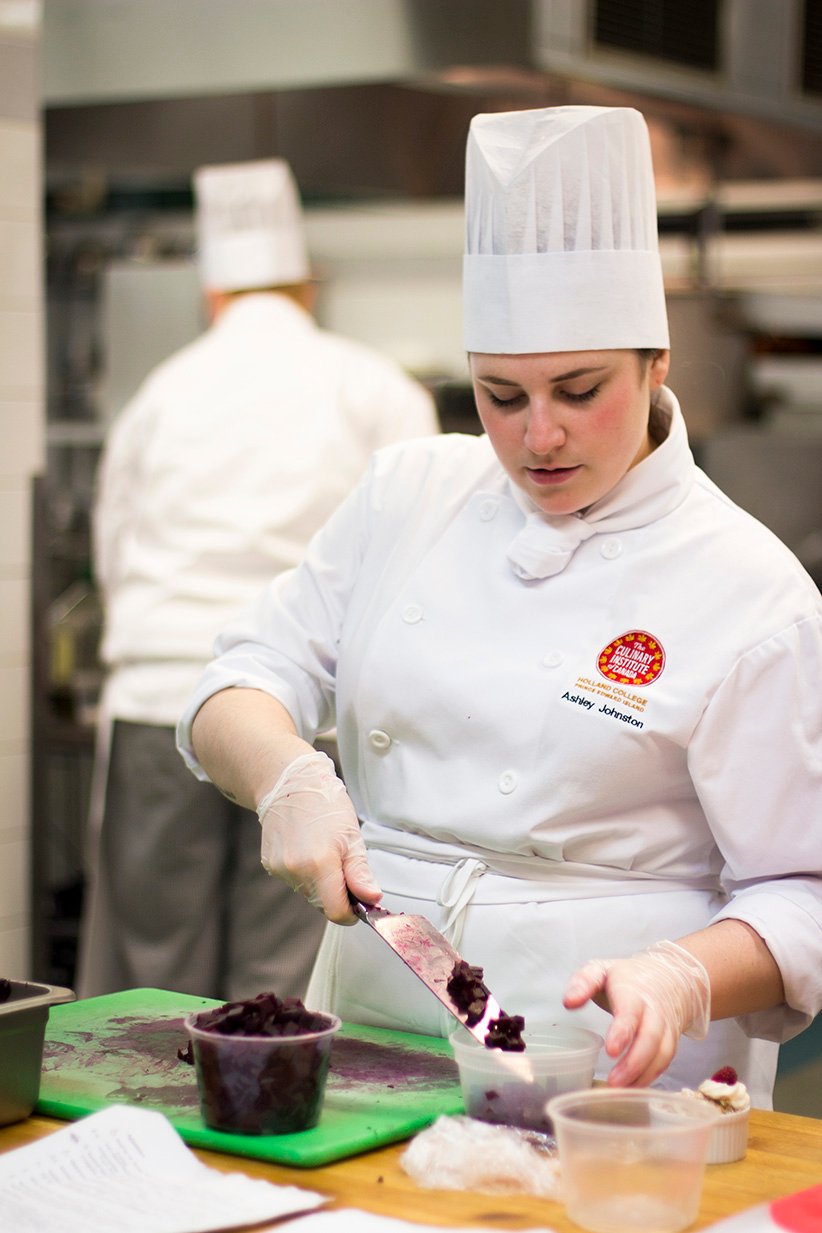 Stand back: Food photographers have to make sure not to get in the way of the knives

When Holland College photography student Stephanie Lee first stepped into the Culinary Institute of Canada’s professional kitchen, she felt totally out of her element. Holding her camera amid bubbling stock pots, towering piles of saucepans and razor-sharp knives, she didn’t want to be in the way.

“The culinary students were chopping away, and you were terrified you’d make the wrong move and they’d slice themselves,” says Lee, who graduated in 2015. Now working as a professional photographer in her hometown of Saint John, N.B., she says the session was good experience in improvisation.

“They had a job to do, and so did I,” she says. “Sometimes when you go on location you’re going to take lighting equipment and stage everything, but these people were working to get a meal on the table.”

This semi-regular collaboration between photography and culinary students is the brainchild of photography instructor Alex Murchison, who has taught at the school since 1994. A photographic career can be winding, so he tries to expose his students to as many styles as he can during the two-year program, including architecture, retail, wedding and fashion shoots.

While photographing food might sound glamorous, between lighting challenges, time constraints and dealing with motion, it’s more challenging than most people think. “The trend for a lot of photographers is self-training, but I think the real value I see in more formal training, is that you’re asked to do things out of your comfort zone,” he says. “My students were quite nervous initially about going into the restaurant and shooting, because they’d be on display in the kitchen. When you’re self-taught, you tend to focus more on the things that come easily to you.”

It’s never easy to coordinate the kitchen shoot, but Murchison says, “I think the culinary students were impressed my students didn’t boss them around or get in the way.” In terms of directing students, the secret is extending best practices—framing, for example—to capture effective, beautiful photographs.

“If there’s a guy cutting a piece of salmon, you have some nice colour and shape there, and if the environment is clean, his hands are in a good position, that’s what you want,” he says. “You want that decisive moment.”

For Prince Edward Island native Liam Mogan, who is currently making a name for himself in Toronto’s food photography scene, the opportunity to experience a professional kitchen before entering the industry would have been a precious one—he graduated in 2005, before it was offered.

“One of my first restaurant shoots was a chef breaking down a pig in the basement of [Toronto restaurant] Splendido. It was an awesome shoot, but it was crazy busy down there, and I was very nervous going into it.”

While anyone with a fancy phone, good lighting and an Instagram account might think food photography is easy, Mogan says it’s important to remember it has been a genre in professional photography for decades. It just happens to be competitive, which means the onus is on young shooters to find their groove and personal style and stick to it.

“School, specifically, is a great time to experiment, fail, and just learn and be creative with no pressure,” he says. “Who’s to say if any of the students will go into food photography, but just being put in the field, in food or whatever else? That’s good experience.”