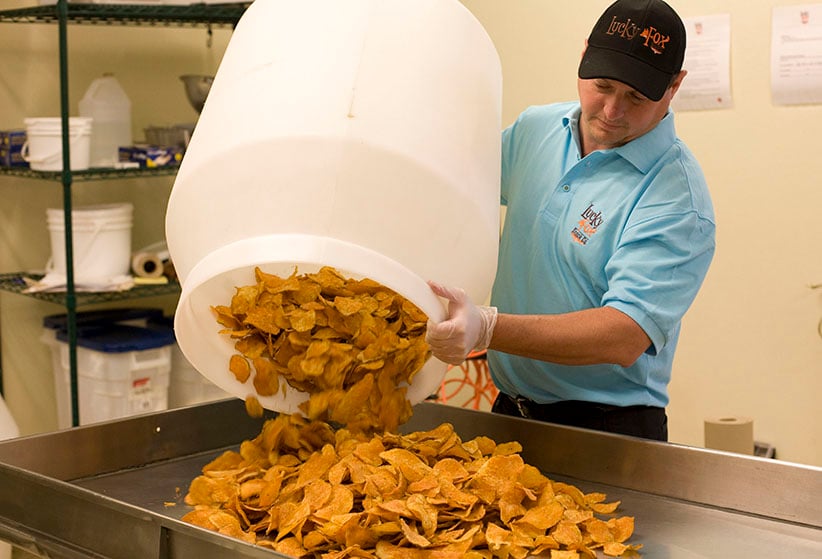 When it comes to culinary advancements in Canada, most people think of big cities like Toronto, Montreal and Vancouver.

But in an unassuming, low-rise brick building on the waterfront in Charlottetown, a small team of chefs and scientists are working on the latest food trends destined to tempt you from the supermarket shelves.

Ambitiously calling itself Canada’s Smartest Kitchen, the 6,000-sq.-foot test kitchen and product development centre employs 10 people to help local and international food companies feed the North American market. This is where they put their little product—whether it’s a sports drink, potato chips, lemon custard, or a frozen scallop entree—through the ringer, testing for allergens, determining shelf-life, figuring out packaging and shipping, calculating production costs, working on marketing, and of course, going through the ultimate test: it must taste equally good coming off a factory line as it does in the test kitchen.

It’s also where volunteers are selected from the lab’s database of 500 eaters to evaluate foods for taste, texture and aroma before they hit the market.

The idea, says executive director Peter Crooks, is to encourage the centre’s own chefs to innovate, rely on the technical expertise of food scientists, and to market that expertise. “We built the kitchen on [those] three pillars,” says Crooks.

The food-lab idea was cooked up about eight years ago when companies kept seeking advice from chefs at Holland College’s lauded Culinary Institute of Canada. “They had challenges in the product-development area and needed help,” says Crooks.

“It was happening regularly enough that the president of the college and a few industry people around town were saying, ‘The industry is saying they need chefs, so let’s create an arm out of the college that would help with this.’ ”

With funding from the province, the college, and Atlantic-based potato company Cavendish Farms, the kitchen officially opened next to the culinary school in 2009.

Since then, the kitchen has worked with companies from across Canada and from as far away as Mexico. It also teamed up with a Dutch food development lab, Het Foodatelier, to tap into European food packaging (Crooks says Europe is a decade ahead of North America in that department).

He recently flew to Budapest to meet with a start-up that grows sprouted soybeans as a nutrient-dense meat substitute. (The kitchen has already come up with 18 heat-and-serve, premade dishes using the soybeans.)

Holland College’s culinary students get involved, too, as the kitchen holds product-development challenges. One such challenge involved whale meat leftover from making muktuk, a traditional Inuit dish of raw whale skin and blubber, with results ranging from whale blood and chocolate gelato to the on-trend whale tacos.

Cavendish also had students come up with a potato-based appetizer, with the winning kale gnocchi dish earning its creator a job on the kitchen’s development team.

“It all goes way back to the province’s fishermen and farmers; we know how to grow food and catch food.

“Combine that with the province’s innovation ecosystem for food—there’s us, the Bio Food Tech research centre, the nutrition department at the University of P.E.I.—it’s a very attractive place for companies to come and develop their products for North America,” says Crooks.

He sees trend reports, and even possibly a franchise, in the future.

Here are a few local projects the product-development team worked on recently:

Lucky Fox potato chips: While a chip seems easy enough, Crooks says a major challenge is choosing a potato that will have similar starch and moisture content throughout the year to maintain consistency in every bag. Multiple tests were done in the kitchen with different potatoes (they settled on P.E.I. russets), thicknesses, and oils (the Charlottetown snack company wanted to stick to a local supplier) before the small-batch chips hit the market across P.E.I.

Donairs in a blanket: An Atlantic company wanted help on a ‘donairs in a blanket’ frozen appetizer. While the company provided the donair meat, the test kitchen had to develop the pastry recipe and find a company that could extrude the meat and wrap the pastry around it at the same time (surprisingly difficult). They eventually found a manufacturer in Edmonton.

Lobster sushi sticks: Using broken meat from the lobster’s claws, legs, and knuckles, the kitchen made a lobster stick much like surimi, the fake-crab stick made from fish and used in sushi rolls, for a New Brunswick-based company. They also created a sheet of lobster meat the size of a square of nori to wrap sushi rolls for the company, which is trying to develop new lobster products to market to the Japanese. KL