How colleges are welcoming pros from other countries

These institutes, which excel at upgrading skills, are tapping into a new demographic—and revenue stream 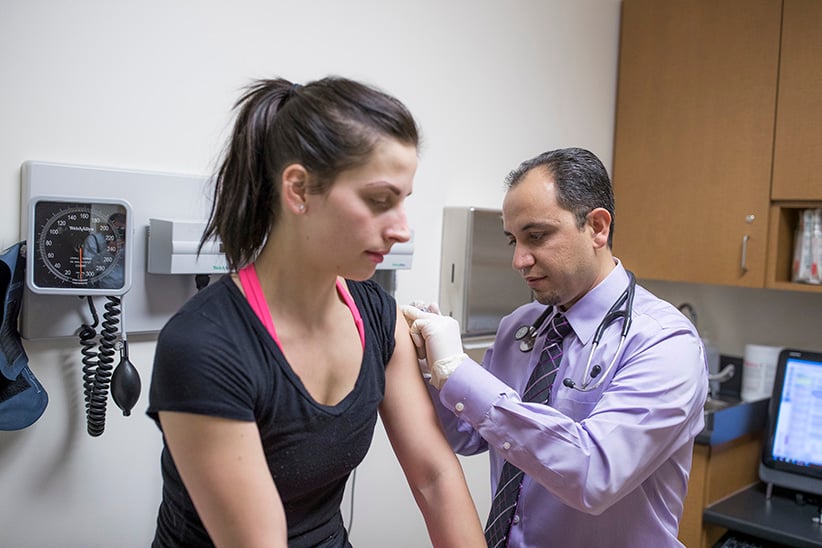 Housam Bada started working as a family doctor in Calgary last year, a job he left 12 years ago in Syria, bypassing the fate that befalls many immigrants with professional degrees and Ph.D.s—ending up in menial work.

“I wanted to be a physician since I was five years old,” he says. “When I achieved my goal of getting into a Canadian residency, it was one of the happiest days of my life.”

While colleges have long been known for helping immigrants learn English or French, the past two decades have seen them take a leading role in bringing immigrants with foreign qualifications into Canada’s job market. With government support that is only expected to grow with the number of immigrants settled (most recently with Prime Minister Justin Trudeau’s promise to resettle 25,000 Syrians), these programs give colleges a new revenue stream, an increased international outlook and a new pool of prospective students at a time of declining domestic enrolment.

Bada arrived in Calgary a decade ago and worked at a nursing home while studying for his Canadian exams. After five years, he came across Directions for Immigrants, a free program at Bow Valley College aimed at helping immigrants get Canadian qualifications. The program has been operating since 2004 on federal funding administered by the provincial government. For three months, Bada studied alongside other immigrant doctors and learned how to assess patients, which he couldn’t glean through textbooks alone. “It introduced us to the health system in Canada and it explained how to interview patients the Canadian way,” he says. “There are places in the world where doctors are kings, where you tell the patient what to do. Here it’s different.”

The training helped Bada pass his final exam, and career counsellors helped him find a job as a physician assistant, where he worked under the supervision of a doctor to build Canadian experience. After completing a two-year residency in Fort McMurray, Alta., Bada started his family practice last year. “Now I can offer this wonderful country my services,” Bada says. His wife, also a foreign-trained doctor, is now in the program, which has expanded its range—as well as its waiting list.

The Directions program offers study groups for immigrants with enough training to write a Canadian licensing exam. For example, a group of 15 foreign engineers meet twice a week for six months to study together for their certification exam, with a professional Canadian engineer in the room to help them. Similar groups exist for pharmacists and nurses, while physicians circle through a handful of these sessions, in groups as large as 45, for the various certifications it takes to land a residency, according to Bow Valley College’s business leader, Karen Jenkins. “It’s important to offer long-term support,” she says. “It may take them many years to get through all their exams, residency and back into their profession.”

As the Directions program is located on  Bow Valley’s west campus in Calgary, clients sometimes pay to take the college’s courses to improve their skills. Jenkins says many immigrants assume they need a second or third master’s degree from a Canadian school, but soon learn that free training and the occasional paid college course may better serve their career goals. “We encourage people to research those things and understand what they’re getting into, and talk to people in the industry and make good decisions before they invest a lot of time and money.”

“We teach them about getting along with people and communicating with their colleagues and their students,” says academic coordinator Valerie Scovill. “It really has to be practical, work-related teaching.” The pupils, whose backgrounds range from psychiatry,  management, literature and more, spend a semester shadowing a George Brown instructor and gradually start helping with the teaching.

Scovill says the college hires many of the graduates, who can bring out the best in George Brown students, 44 per cent of whom were born outside the country. “It’s also a benefit to the community, because the people come in with such knowledge and international experience,” she says. “It’s just a win-win situation.”

The programs also boost the college’s bottom line, with students paying tuition ranging from $7,600 for college instructors to $12,500 for construction engineers. “The variety of programs casts a wider net and attracts a wider diversity of immigrant students, which is good for enrolment and good for the school,” says Alex Irwin, director of the School of Immigrant and Transitional Education. “They also benefit the college greatly through adding to the diversity of our student body.” Meanwhile, the school’s Entry Advising Service provides free, one-on-one advising for prospective students, 70 per cent of whom are immigrants. The advisers demystify Canada’s post-secondary education system and explain how to get foreign credentials recognized. “[It] provides a benefit to the college through attracting newcomers to our programming,” Irwin says.

On the West Coast, Vancouver Community College runs bridging programs like the intensive, seven-week course that takes engineers from different countries and industries and trains them to be fire-protection technicians, an in-demand job that pays $21 to $25 per hour to inspect fire extinguishers, sprinkler systems and carbon-monoxide detectors. It allows them to build Canadian work experience and earn a decent income while starting the long process of upgrading their specialized engineering qualifications. “They’re not having to put their professional training on hold while they’re doing language training. They’re combining both and it’s fully integrated,” says Tanis Sawkins, associate director of the Centre for Immigrant Integration.

The program also brings in more college students, because immigrants get comfortable with the idea of going to school as an adult. “They’re also introduced to the college system, to the idea of lifelong learning.”

In October, the college started a hospitality-training program for Syrian women, who had one of the world’s lowest workforce participation rates—just 14 per cent—before the civil war. During the war, they either had no opportunity for training or, if they had been in school, no chance to continue their education.

They are taught how to network, apply for jobs online and practice for interviews, while their children receive daycare and nutritious snacks. Local businesses also hire the participants for practicums. “It’s a lot of support,” Sawkins points out, “because it’s a vulnerable group of women with multiple barriers.”