How one woman overcame fetal alcohol syndrome and found art

Art allowed Jennifer Tourangeau, a 36-year-old Dene woman, to deal with personal pain—and it's led her to a career she's passionate about 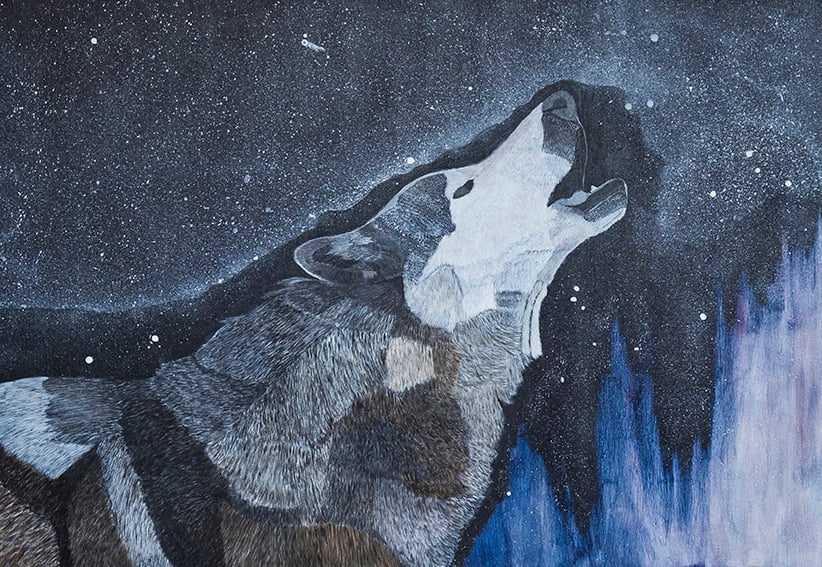 Tourangeau: ‘I had no idea what I was going to do with the diploma, I needed something to enjoy. Art allowed me to release a lot of pain, and find out who I was.’

“How are you going to change your part of the world in a positive way for the next seven generations?”

That was the challenge that Jennifer Tourangeau put to her fellow graduates at Grande Prairie Regional College’s two-year visual arts and design program in Alberta this spring. She urged them to take an Indigenous approach to stewardship—that is, to live and work for the benefit of seven generations into the future. As valedictorian, it was her job to send them out into the world with a message of hope. The 36-year-old Dene woman’s very presence at the lectern was likely hope enough for many in the crowd.

“My own change began when I chose Grande Prairie Regional College as my first stop in the journey to my dreams,” she told them. “During this time, I have  had my own struggles, joy, excitement, and at some points wanting to give up. As you can see, I didn’t.”

Tourangeau, who describes her art as a mix of painting, sketches and ink drawings, often inspired by her Indigenous heritage, says she loved the way her instructors built on her strengths as an oral and visual learner. But it’s been a long road to this point.

She was born with fetal alcohol syndrome in the Northwest Territories community of Lutsel K’e, on the shores of Great Slave Lake. When she was 14 months old, her mother gave her up for adoption and she grew up with her adoptive family in Fort Smith, N.W.T. While Tourangeau’s adoptive father, who is Indigenous, and her adoptive mother, who is not, were supportive of her, she struggled with feelings of abandonment and long periods of depression.

When she met her biological mother again at the age of 13, it was an emotional experience that shook her up. “I mean, how do you explain to a 13-year-old who has a disability why you gave them up? It took me a long time to realize the biggest sacrifice a mother can give is to give up her child so she can have a better life.”

At the age of 16, Tourangeau landed a job as a disability and community worker in Fort Smith. She enjoyed it, but was never able to do it full-time, even after graduating from high school. “The heavy lifting”—often part of the job, working with the disabled—“was hard on me,” she says. “I’m only four foot ten.”

After a short-lived attempt at a career as a computer technician, she found another job as a group-home worker. But she pushed herself hard and worked long hours, leading to burnout and a medical leave for stress and anxiety.

It was during this time—as Tourangeau was trying to figure out what to do with her life—that she enrolled in the visual arts and design program at Grande Prairie. “I had no idea what I wanted to do with the diploma. I just needed something to enjoy,” she says. “The art allowed me to release a lot of pain and find out who I was.”

But Tourangeau’s pain was not over. As she began her first semester, she received news that her biological mother had been strangled and her body left in an alleyway in downtown Yellowknife. As Tourangeau began the final year of her program last fall, her mother’s murderer was sentenced to life in prison.

“It may not be enough, but at least I got closure. A lot of Indigenous people don’t get this,” she says. “My mother is the product of the residential school system and so am I. I choose to break the cycle.”

She praises her instructors for supporting her request to complete the two-year diploma over four years and allowing her to ease into the program with studio-based work.

One of those instructors, Native studies teacher Kirsten Mikkelsen, describes her as a “highly focused and determined human being who strived for excellence in spite of the barriers.”

Mikkelsen recognized her student’s potential. This fall, she helped recruit Tourangeau as a peer mentor for Indigenous learners in the college’s department of arts and education.

While Tourangeau loves her new job, she sees it as a stepping stone to a degree in art therapy and a career helping others work through their anguish with art.

Her art history instructor, Edward Bader, says she’ll no doubt get there: “She works very hard. She’s very passionate about her art and follows up on every opportunity.”