Humber’s gospel choir is a credit course for music students, but non-music majors are welcome, too 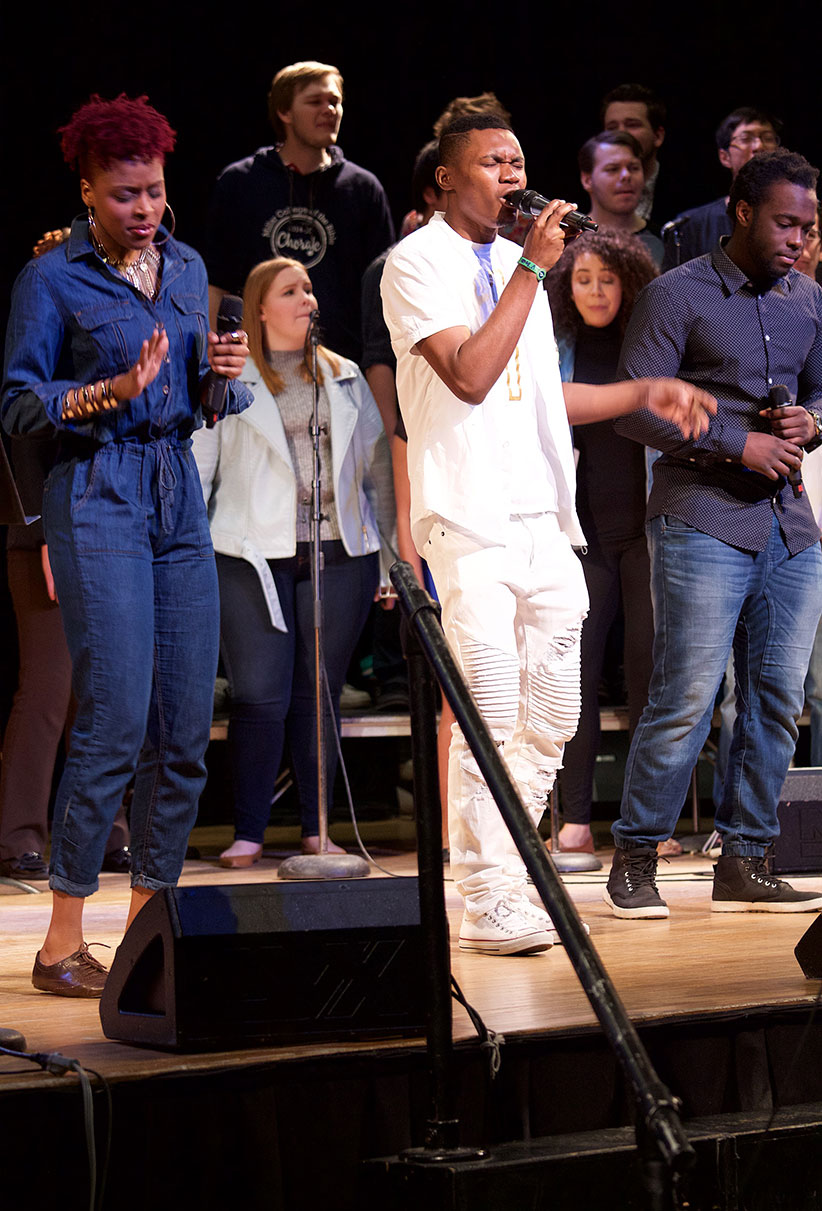 Raising their voices: Humber students can take part in one of the only college-level choir courses in Canada

Brad Klump scans the faces of the singers standing in a tight circle around his grand piano. “Who wants to take the next solo?” he asks the group of Humber College students in his gospel choir. There’s a moment of hesitation before Charles Appiah steps toward the mic, takes a deep breath and belts out the first few chords of a well-known modern gospel song, “We Worship Your Name.”

One of the only college-level choir courses in the country, music students get a credit for singing here. But, since 2013, it also has been open to non-music students who pass an audition and are willing to put in the time, though they get no credit for it.

“I’ve done choirs and solos in the past, but after going through post-secondary education, I kind of put singing on the back burner,” explains Appiah, 26, who already had a Humber diploma in computer programming and a post-graduate certificate in web development before he enrolled in the three-year bachelor of digital communications program in 2016. “When I’m singing in front of people, I get so nervous—like, shaking, out-of-body, crazy nervous. But I decided to join because I want to put myself out there and not be so scared.”

The choir has grown exponentially since it was opened up to students outside the music faculty, says Klump, the choir director. Out of its 35 members, it now includes 20 non-music students, including an early childhood education major, a police foundations major and a student studying comedy writing. The choir performs six or seven times a year, both on and off campus.

What brings them together is a love for gospel music and a desire to find a way to pursue it despite hectic academic schedules. “One thing that always strikes me when I hear gospel choirs is that there’s a joy, an energy that’s very contagious,” explains Klump, who has taught music at Humber for the past 13 years. “So many of the students love music, and while a lot of them might not want a career in it, they’re still wanting to experience it at the post-secondary level.”

The music they’re singing transcends religion. While gospel music is traditionally Christian, Klump estimates that at least half the choir does not identify as such, and many members had never heard gospel sounds before. “It’s just about having an appreciation for music,” says marketing student Linda Luztono, who’s been part of the choir for two years. “The first show we did, I just had goosebumps,” she recalls. “The energy is euphoric and very positive and uplifting. I was talking about it for days.”