The tricks—and the stigma—of the trades

Long derided as a path for students who aren’t ‘book smart,’ the trades are more technical, complex and rewarding than ever 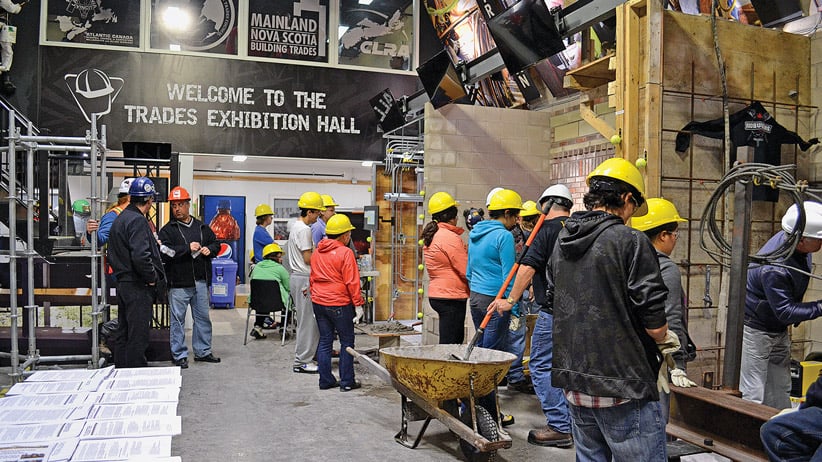 Joel Michaud, 26, is a living advertisement for the skilled trades. Through Alberta’s Registered Apprentice Program, he started his training in carpentry while attending St. Mary’s High School in Calgary. He graduated in 2006 and has been a certified carpenter for about five years.

But when he made the decision to go into a trade, his friends and family were puzzled by the choice.

“A lot of people were wondering why I wanted to do it, because I was getting really good marks in school, and everybody thought I should be a doctor or an engineer. That just didn’t align with my passion,” he says.

Now he works as a foreman at Sunview Custom Cabinetry in Calgary supervising several teams, and does a brisk business on the side making customized musical instruments. The job has brought him financial security (he bought his first home at age 20), but, more important, he wakes up every morning excited to go to work. “If you’re able to do something for your living that other people do as their hobby, that’s a pretty special thing.”

It’s a familiar story by now: Jobs in the skilled trades are in demand,  provide a stable income and require a smaller investment than college or university. But while awareness of opportunities in the trades has soared, negative attitudes about them have barely budged, says Sarah Watts-Rynard, executive director of the Canadian Apprenticeship Forum (CAF).

Most people still see the trades as a path for students who aren’t “book smart.” With advancements in technology, however, the trades require more skills than ever. Industry groups and schools recognize that young people need to experience trades first-hand to understand how technical, complex and rewarding they’ve become.

Apprenticeships are available for hundreds of skilled trades, ranging from bakers and boilermakers to oil rig technicians, plumbers and electricians. (Not every trade is available in every province.) Candidates with a Grade 12 education or equivalent can register with their province as an apprentice and sign on with an employer willing to supervise their training. A couple of months of classroom instruction per year are usually required, and there’s a certification exam, but apprentices spend most of their time working for pay under the tutelage of experienced tradespeople. The process takes two to five years, but federal and provincial governments offer grants to cover costs in an effort to get much-needed tradespeople trained.

Almost all provinces have an apprenticeship program for teens, and many offer high school credits for on-the-job training in lieu of pay, but Watts-Rynard says these programs are underused, and the 400,000 apprentices registered in Canada are not enough to meet demand. Many apprentices have circled back to the trades after spending thousands of dollars on post-secondary programs that didn’t work out for them, according to Watts-Rynard. She’s trying to change that and get high school students to consider the trades first, rather than as a fall-back plan.

“Parents say they have the utmost respect for tradespeople. Teachers say the same thing. Everybody has a good attitude,” she says. But CAF surveys tell a different story. A bit more than half of students and parents say their top choice is university, but only 30 per cent of students actually go. Later this fall, CAF is releasing a survey of 1,035 parents of teens aged 13 to 17, half of whom believe the trades require hard physical labour. In reality, technology is doing most of the heavy lifting, and workplaces are discouraging it to reduce injuries. One in four parents said the trades are for weak students.

“It actually scares me,” Watts-Rynard says. “The need to have the math skills and science skills at such a high level to be successful means we might be sending people into the trades who are not prepared.”

The skill Michaud uses the most, for example, isn’t sanding or levelling. “My biggest thing would be problem-solving. There are always issues that come up and I try to be the fixer or delegator,” he says. “There’s a lot more to it than just getting dirty. You need your computer almost all the time for your drawings. We would be lost without the technology.” Michaud depends daily on AutoCAD, the scientific drawing program, and Cabinet Vision, a suite of design and manufacturing software speciﬁcally for woodworkers. Yet most people still assume he works with hammers, saws, and his hands. “The biggest way people become inspired is when they see what someone has created. You can shove something down someone’s throat, but you’ve just got to spark that passion that might be inside them.”

Trent Soholt, executive director of the Nova Scotia Construction Sector Council (NSCSC), is trying to ignite interest in elementary and high school students. The province backed the renovation of an old Halifax warehouse into a theme park for the trades. Visitors move around the space trying out 14 different jobs. Nearly 500 people have visited since the exhibition hall opened in April, and Soholt is booked solid until early 2015.

“Students can test electrical circuits, lay a brick wall, cut and fit pipes, use a welding simulator, mix and finish concrete and draft plans in a trailer made to look like one that might be on a real job site. They crawl into a miniature boiler to feel what it’s like to work in a confined space, and try the little-known trade of non-destructive testing, which involves using X-rays and sound waves to inspect industrial structures,” he says. “They leave here going, ‘Wow, I had no idea I needed to know so much math to be an electrician. I had no idea I needed to understand physics and weights and vectors and force to apply in various trades.’ ”

On a less ambitious scale, school boards and industry-training programs are pooling their resources to provide young people with a chance to try trades. Reece Morgan, a chef, coordinates the Ontario Youth Apprenticeship Program for the Hamilton-Wentworth District School Board, which was held up as an example of innovative education at the Skilled Trades Summit in Ottawa in June. The school-to-work program allows students to explore apprenticeship jobs in Grades 11 and 12 through a co-op program. Morgan, a tradesperson himself, sees the seven options as “a buffet” that students can sample without a commitment.

In Manitoba, the Red River Technical Vocational Area (RRTVA) serves a student body of about 3,500 across 13 schools in five school divisions. Not every school offers all 19 programs, but any student at a school within the network can attend any of the programs, and it provides transportation. “I’m not aware of any other region that has a service-sharing agreement as this region does,” says Reg Toews, an instructor who helps to organize the high school apprenticeship program. The network is funded by the school board and employs full-time staff to liaise with employers, help students coordinate their schedules and develop new vocational programs. The high schools are responsible for the classes themselves and provide the teachers.

The health care aide and educational-assistant programs allow students to get high school credits while earning a certiﬁcate from Red River College, without paying tuition, and nine of the programs are accredited with Apprenticeship Manitoba. That means students can get all their training and work-placement hours for their first level of trade certiﬁcation while still in high school. There’s a focus on technology: The typical carpenters’ bag today contains lasers, a laptop and an iPad, says RRTVA coordinator Harv Giesbrecht.

Gaining a passion for a trade can turn struggling students into committed, motivated apprentices, Toews says. “I’ve had students come to me and say, ‘Now I’m going to pay attention in math class, because I need to know angles and trigonometry for the roof angles on houses.’ ”