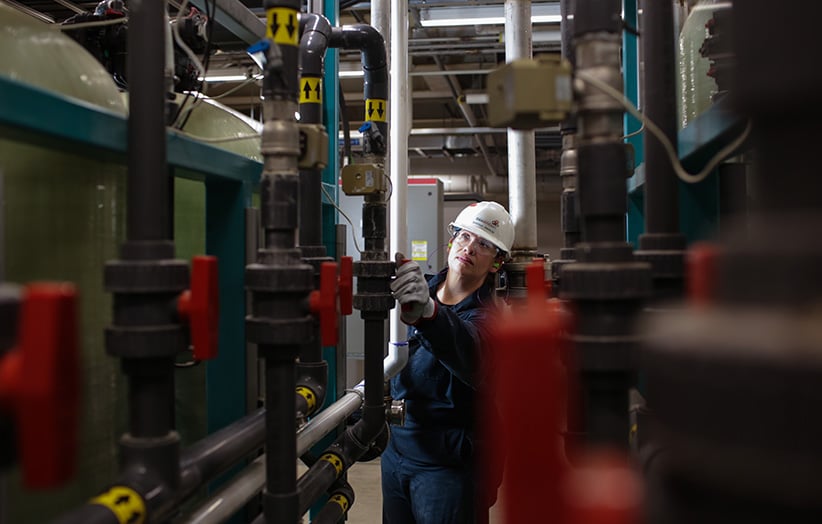 Avant-garde engineering: Lambton College has pushed to serve the needs of new employers as the region’s industrial economy evolves

After losing her job at a Sarnia casino when it shut down, Sherida Ranson decided to shift gears. Aiming to remain in the city, she realized that her tourism and hospitality diploma wouldn’t be of much help, so in 2012, she enrolled in Lambton College’s chemical production and power engineering technology (CPET) program.

The college has a reputation for fostering strong relationships with local employers, including both the long-established petrochemical plants as well as newer firms with a more environmental outlook. “I felt the program would be beneficial to me,” says Ranson, 45.

Halfway through the two-year program, she found herself listening intently to a presentation at the college by a new manufacturer, Bioamber. Instead of petrochemicals, the publicly traded bio-industrial firm uses natural sugars, as well as a proprietary fermentation process, to produce industrial chemicals. The company’s mission is to provide these substances using a more environmentally friendly manufacturing process, and Bioamber has won several awards for its work.

Ranson was intrigued by the presentation, and saw an opportunity as the company was in the midst of commissioning a plant in Sarnia. “It was very interesting, as it was a one-of-a-kind plant.” She stayed in touch with the recruiting managers, and was hired as a process operator upon graduating in 2014 with a diploma in chemical production engineering technology. Indeed, about 20 Lambton graduates ended up being hired by the company, college officials say.

According to Lambton’s president and CEO, Judith Morris, the college has moved aggressively to widen its focus to include the needs of new employers like Bioamber, as the region’s industrial economy evolves beyond its roots in the oil and chemical sectors. But, as she points out, greener bio-industrial firms often rely on engineering systems and processes that draw on the sorts of skills Lambton graduates would require for positions with traditional employers.

“We’ve discovered that the [chemical process engineering] program for petrochemical positions are similar to jobs in bio-industrial plants,” she says, adding the graduates with instrumentation and control engineering can also use their skills in such facilities.

The twinned transition, of the region’s employers and the college, is crucial, given that international, federal and provincial carbon mitigation policies will have a direct impact on Sarnia-Lambton’s economy.

In recent years, Lambton has pushed hard not just to adapt its programs but also to create a research and development infrastructure meant to support local firms and innovators seeking to develop green technologies. Through a partnership with the University of Western Ontario, for example, Lambton is involved with the Western Research Park, which is the platform for testing emerging technologies such as cellulosic bio-fuel production (which converts waste straw and other plants) and gasification, a form of high-efficiency waste incineration. The college has added courses on gasification to its bio-engineering program, Morris says.

The firms involved include Woodland Biofuel, Comet, and Vive, a firm founded by University of Toronto chemists that has developed pesticides made with a reduced amount of petroleum-based additives compared to traditional crop-protection chemicals.

Morris points out that Lambton’s various R&D centres, which work with local start-ups, provide valuable hands-on experiences for students. Between 2013 and 2016, the college employed 262 students on various research projects, providing them with $1.24 million in aggregate salary. Many, she adds, are international students with previous engineering experience. Such positions provide the Canadian experience many employers seek when recruiting newcomers.

As Morris says, “We’re providing [Sarnia employers] this incredible workforce of people who can operate and control the plants, but also research students and graduates who can solve problems.”