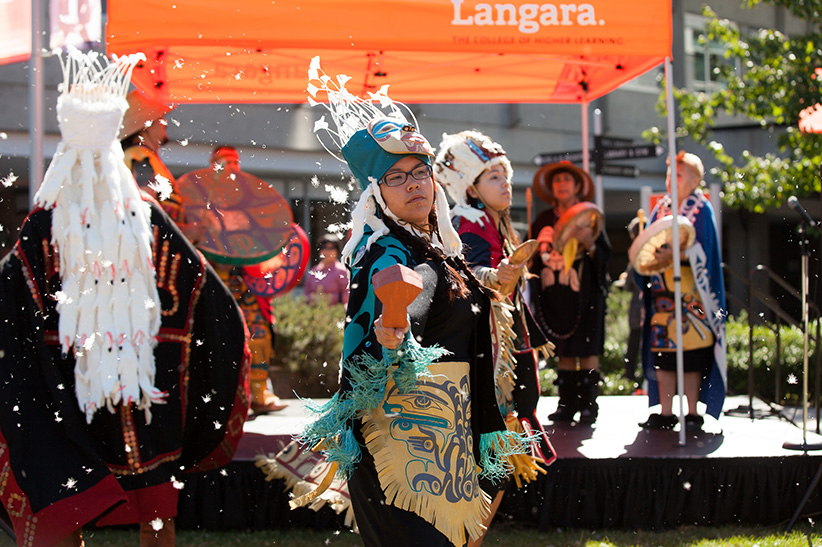 Last year, Nicole Cardinal, a 40-year-old married mother of two achieved a dream, transferring into the third year of the University of British Columbia’s First Nations studies program. She was one of 12 Indigenous students who broke educational barriers through a three-year pilot project devised by Langara College and UBC.

This September, that pilot project turned into a permanent arrangement. “This is the start of building something, and it was started by this group of students,” Langara president Lane Trotter said at the signing ceremony formalizing the Aboriginal Transfer Partnership (ABT), which provides mentorship and financial aid to Aboriginal students.

It could have been a rocky road for Cardinal, but she had great advisers.

When she enrolled in Langara College’s First Nations studies program in 2009, she hadn’t attended a class since graduating from Vancouver Technical Secondary School in 1994. Cardinal had worked in sales and travelled, then had her first child in her early 30s. That’s when she decided to go back to school. “I worked and played throughout my 20s, but I couldn’t just live from paycheque to paycheque anymore,” Cardinal says.

She’d been a strong student at high school but now, 15 years later, found college studies at Langara daunting, learning how to critique readings and look at an issue from all sides: “After it clicked, I saw a different world with my eyes wider open.” Two years into her college program, in 2011, the ABT pilot between Langara and UBC was announced, opening the door to a university path. Cardinal instantly switched into that stream. “I always dreamed of going to UBC, and my dream became more real,” says Cardinal, whose roots are in the Stellat’en First Nation in Fraser Lake, B.C.

Though Langara was daunting, “I learned how to cope with stress, learned academic writing and took other workshops. They all made a difference.” Cardinal found UBC less daunting, because she’d already been prepped by UBC advisers, with whom she met regularly at Langara. She will graduate with her degree in 2017.

It’s a good news story: 187 Aboriginal students are registered at Langara in 2015. Students who complete the required 24 to 60 course credits, and maintain a minimum GPA of 2.67 are assured admission to UBC. Cardinal says her children, 8 and 4, motivated her. “As an Indigenous woman I have to have hope, especially for my daughters.”