A conservation bent attracted the attention of the Canadian TV hosts of Trigger Effect, and now its faculty are featured guests 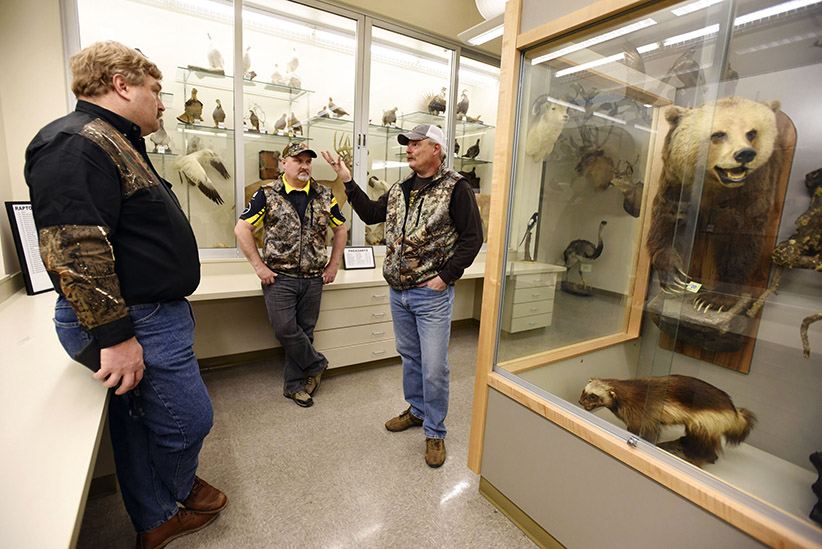 Beyond the urban jungles, where police officers maintain law and order, is a vast wilderness also in need of protection. In Canada, land of the loon and the mighty moose, the beaver and the salmon, protecting wildlife and its habitat takes a different kind of law enforcement. Enter Lethbridge College’s natural resource compliance program, which teaches students how to detect, investigate and enforce violations of laws and regulations designed to protect our air, fisheries and wildlife. After the two-year program, students can apply to the bachelor of applied science in conservation enforcement degree program. Graduates go on to careers as wildlife conservation officers and investigators, park wardens, and even police officers.

Field trips include hunter checks, where “basically we sit out there and watch and see what they’re doing, what they’re shooting, how the hunt’s going. We’ll watch from a distance with binoculars for an hour or so,” says 20-year-old Jonathan Schultz, who’s in the second year of the diploma program. “I didn’t really know what I was getting into, but it was a fun little interview. They asked why the check was important, what it means to me and how I think it helps.”

This fall, as part of the patrol procedures class, the second-year students went out hunting for migratory birds with four faculty members. When the hunt was over, students checked to see that the hunters were shooting steel, not lead—federal regulations banned lead shot in 1991 due to serious concerns about lead poisoning—that they had hunting licences, and that they hadn’t gone over the allotted limit of geese and ducks.

The collective expertise in wildlife conservation and compliance at Lethbridge College attracted the attention of two Canadian wildlife biologists who star in Trigger Effect, a popular half-hour hunting show with a conservation bent on Wild TV, a Canadian specialty channel. The show’s co-hosts, Dean Trumbley and Kent Michie, were keen to add an educational component to the show, and the Lethbridge College faculty seemed like the perfect fit.

“It’s not so much focusing on the hunt, but more focusing on understanding the animal, and breaking it down to habitats and behaviours,” says Trumbley, who was raised in the southern interior of B.C. He has participated in over 70 fisheries and wildlife studies and research projects, such as wildlife inventories and ecology studies. “You can’t just confidently take, you have to put back somehow. Sometimes that’s just by obtaining knowledge.”

He and his best friend Michie, who grew up in rural Manitoba and has been a big-game hunter and waterfowl guide for the past 25 years, created Thunder Boyz Productions to develop the hunting show in 2011. The two hunt all over the world—everything from red stag in Argentina to waterfowl in B.C.—but their niche in the market is weaving educational elements into their program.
Keen to inspire the next generation, the duo reached out to Lethbridge College in 2015 while filming their fourth season. They started a segment called “Conservation Connection,” which featured 60- to 90-second interviews with faculty members on a topic of their expertise. The segment proved so popular that they expanded the feature to two minutes this season.

“Kent and Dean are pretty committed to the educational component … We welcomed the opportunity and saw it as a win-win for both sides,” says directed field studies coordinator David McRae. He has been at the college for 20 years and chairs both the diploma and the degree programs. He’s done a couple of segments on the show himself—one about “problem” wildlife and the other on what it takes to be a game warden. “The problem really isn’t the wildlife. It’s what humans are doing to attract the wildlife,” McRae says.

Veteran Lethbridge instructor John Derksen was also among the experts interviewed. “They asked me to talk about fish habitats and how it relates [to hunting],” says the researcher with the college’s Aquaculture Centre of Excellence.

As it happens, Michie and Trumbley kickstarted their careers with higher education. Michie has a degree in wildlife and fisheries technology from North Dakota State University, while Trumbley has similar training from Fleming College in Peterborough, Ont., and additional schooling from the College of Applied Biology in Victoria. “We try to explain that where we are now, and everything we’ve done in our lives, is a result of education,” says Trumbley.