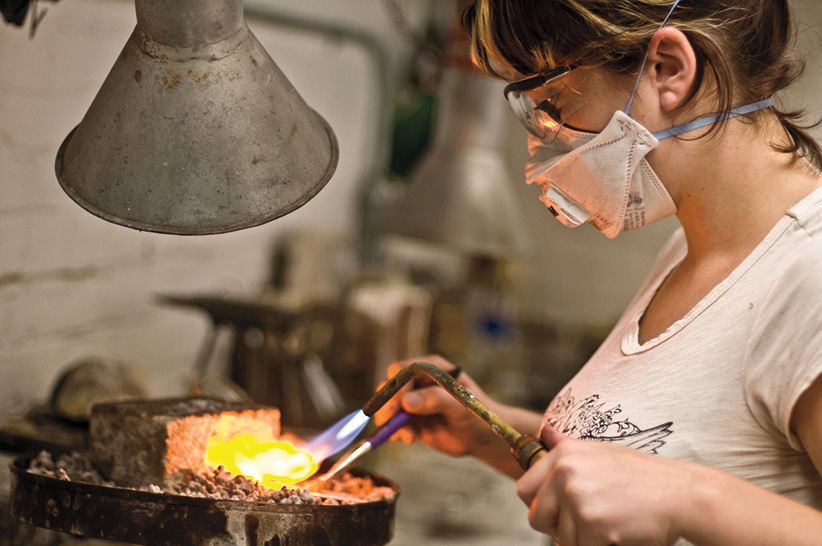 At a recent workshop, Brigitte Clavette held a bowl aloft and declared, “Now you can save your own life.” That sounds dramatic, but when it comes to teaching jewellery and metal arts at the New Brunswick College of Craft and Design (NBCCD), Clavette takes her work seriously.

“That bowl was hammered from a six-inch metal disc, but you can drink out of it. You can dig, you can scrape, you can eat,” she says. “The value of the handmade, and what that signifies for our life, is important.”

Clavette, a metal artist whose work is held by the Victoria and Albert Museum in London and by the Royal Ontario Museum in Toronto, has taught at the Fredericton college since the mid-1980s and is now head of the Jewellery and Metal Arts Studio, one of four fine craft programs. While it has changed over the years, the most significant recent addition has been the incorporation of 3D printing. “We cast everything we can get our hands on. We cast dead stuff, we cast plastics, we cast wax, and now [students] can cast 3D stuff they’re printing.” Students use RhinoGold, software used by commercial jewellers, but Clavette says the school doesn’t want cookie-cutter art. “What I want to show is that you can develop your idea on a computer and then subvert that and bring it into real life.”

NBCCD classes have a maximum of 12 students, which helps sustain its dedication to one-on-one mentorship. During the two-year diploma program, students learn basic benchwork techniques—filing, cutting, soldering and using fine materials, as well as hammering skills—and the operation of machinery used to make vessel forms and flatware. The school provides first-year students with a set of tools, valued at about $800. In second year, students must buy their own set.

The program attracts a wide range of people. Typically, a third are older than 35—Clavette once had a student in her seventies. So while the program aims to recruit high school graduates, it also attracts mature students interested in being professional artists or serious hobbyists. “Having three or four people in their forties, fifties or sixties, even if they’re only there part-time, that blend creates a beautiful work field. A balance,” says Clavette.

Due to the short length of the program, students get less conceptual training than at what she calls their “sister programs” at the Nova Scotia College of Art and Design (NSCAD) University in Halifax and OCAD University in Toronto, both of which are four years long. The focus on entrepreneurship is tailored to students who want to develop commercial or artistic collections, work in the industry or start a business.

“This is no longer a hippie-on-a-blanket situation,” says Clavette. “Within the two years, they’ll be developing a website and all the public materials they need, plus they have all the nuts and bolts on how to build a studio. It’s fast, but it works.” After the program’s annual Christmas show, entrepreneurship students travel to the Atlantic Craft Trade Show in Halifax, where they network with gallery owners and shopkeepers looking to purchase in bulk or wholesale.

“When I finished my college in 1980, I didn’t even know how to do a CV,” laughs Clavette. “It was totally uncool to talk about anything about the business of art at NSCAD in those days. You just didn’t. You just made stuff and hoped someone bought it.”