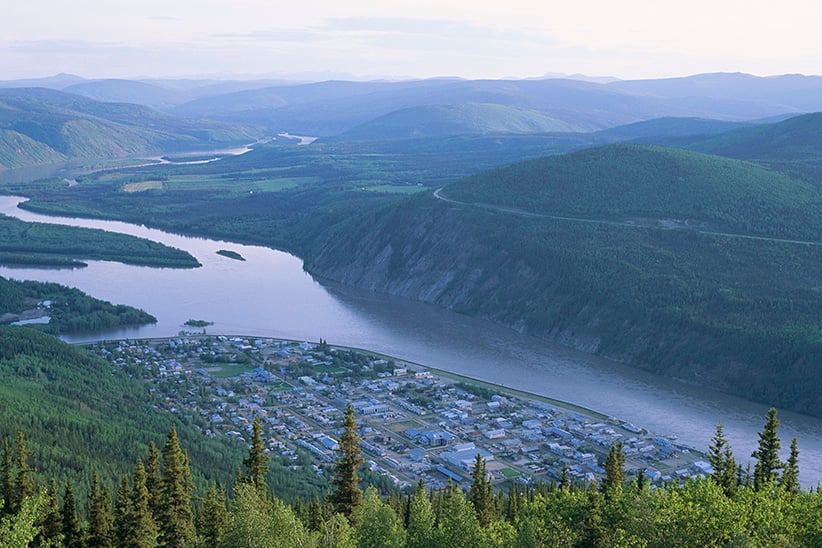 Cold crops: The central Yukon area around Dawson, 500 km north of Whitehorse, was farmed in the Gold Rush days

Close your eyes and imagine you’re standing in the fertile earth of a farmer’s field. It smells healthy and rich. You see harvested rows of large, perfect potatoes and orange carrots lying in the soil like nuggets of gold. It’s such good land, in fact, that it’s now home to one of the country’s most innovative new agriculture training programs. Now open your eyes. Would you be surprised to find yourself just shy of the Arctic Circle?

Dawson City, Yukon, now boasts an agriculture program with big vision. In fact, you could call it groundbreaking. The Tr’ondëk Hwëch’in First Nation has teamed up with Yukon College to create a teaching and working farm in an effort to create a source of sustainable fresh food and reduce reliance on store-bought food. In April 2016, it accepted its first 20 students, aged 16 to 64, all but one of whom were First Nations and four who were high school students earning credits at both the college and Robert Service High School. The six-month program saw students work on academic skills such as literacy and numeracy, with the option to live on the farm as homesteaders, sharing a cookhouse and a wash house and living in tents. In addition to learning to work as a team, they were also taught some basic carpentry, all while planning, planting, thinning, weeding, and finally, harvesting their crops of beets, carrots, potatoes, peas, kale and corn. Though they earned credits through Yukon College’s Skills for Employment program, the goal is to develop it into a longer diploma, certificate or even a degree program in sustainable agriculture.

To Yukon residents, the fertile land around Dawson City comes as no surprise. Although more than 500 km north of Whitehorse, the central Yukon area has a sub-Arctic climate with a short but warm growing season. The Tr’ondëk Hwëch’in farmland was once used to grow fresh food for the residents of Dawson in 1898 at the height of the gold rush, when more than 30,000 people lived there.

Food security in the north is a much-discussed problem, but for Yukon residents, it is critical. With only one road from Dawson City to the more populous south, and just one road connecting the Yukon to the rest of Canada, it is in a precarious situation.

Indeed, Clint Sawicki recalls a flood that blocked the Alaska Highway in 2012. “It was like an apocalypse,” says the acting director of the college’s Yukon Research Centre. “There was no food left in the stores.”

The farm grew out of a desire from the Tr’ondëk Hwëch’in people to grow fresh food on the land in a sustainable way. Dexter MacRae, director of human resources, education and training for the Tr’ondëk Hwëch’in government, together with the chief and council, joined forces with Sawicki and the college’s dean and directors.
The result was a unique partnership that “intends to increase locally available food by harvest sales and by building local farming knowledge,” says MacRae. “In the future, we also plan to bring in farm animals, encourage tertiary food products and operate a year-round greenhouse.”

Sawicki confirms that winter greenhousing in the sub-Arctic is a very real possibility, with research well under way on a design that’s made “in the north, for the north and by the north.” The Yukon Research Centre’s Cold Climate Innovation program is working with mechanical engineer Maxime Dugre-Sasseville, who just won a $60,000 innovation prize to develop his thermodynamic greenhouse, which would allow farmers to capture and store the sun’s energy and use it to grow vegetables year-round.

Although it was a land-based learning experience, the students had access to iPads and the Internet for two hours a day in the classroom. George McLeod, a mature student, wanted to learn to grow his own food, but you can hear something more in his voice. “When your plants are out and finally in bloom, it gives you that feeling of success,” he says. “There’s a feeling of pride for helping the community. It feels really good to feed other people.”